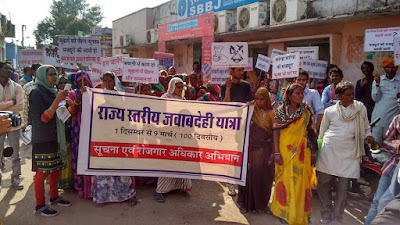 By Pankti Jog*
In an incident which has created a flutter among Right to Information (RTI) activists across India, goonda elements, said to be close to a BJP legislator in Rajasthan have brutally attacked the 100-day Accountability or Jawabdehi Yatra, begun by Magsaysay Award winner and pioneer of the RTI Act Aruna Roy. The incident took place in Aklera area of Zalawad district, which falls into Manoharthana constituency.
According to eye-witnesses, MLA Kanwar Lala Meena led the mob, which brutally attacked activists with lathis, vandalizing vehicles and destroying cameras.
The attack took place in the evening at around 5 pm on on January 16, when the RTI campaigners were singing songs. The assailants started snatching the activists’ cameras, and when this met with resistance, they started beating up all those who formed part of the campaign.
Shankar Singh, Anuraag, Kamal Tank and many other campaigners, who were participating in the rally, were injured. Despite the attack, so far the police has not taken any action against the culprits. The attackers attacked the activists with lathis, causing internal injury to several of the activists.
Also led by senior RTI activist Nikhil Dey and Shankar Singh, the Accountability Yatra began on December 1, 2015 from Jaipur, and will cover all 33 districts of the state, spending three days in each.

Around 100 organizations are supporting the yatra in Rajasthan under the banner Soochana Evam Rojgar Adhikar Abhiyaan (campaign for right to information and employment). Around 80 people have been travelling from day one, with hundreds joining in each district for local programmes.
The yatra registers grievances related with the distribution of ration, pension, employment under the Mahatma Gandhi National Rural Employment Guarantee Act (MGNREGA), social security schemes, health and education.
In each of the districts, the yatra spends two days in the fields, performing street plays, organizing rallies, demonstrations, and public outreach programmes at cross roads, small and big towns.
In each district, a Jan Sunwai or people’s hearing and Shikayat Mela or grievances fete is being organized, at the end of which all the complaints that are registered are handed over to the administration. The complaints are registered online and tracked for their disposal.
The yatra participants are demanding a strong decentralized and effective accountability mechanism, which should be time bound as well as participatory in spirit. The organizers have prepared a draft law on this, placing it before the general public for discussion.
The yatra, which is to conclude on March 9, is already having tremendous impact on the people and the media, with the state government coming under pressure. At many places, once yatra moves on, the ration dealers were found to have begun giving ration. There have also been instances of the benefit of crop insurance being paid immediately.
Gujarat NGOs Janpath and Mahiti Adhikar Gujarat Pahel (MAGP) have strongly condemned the cowardly act by supporters of the local MLA of the ruling party in Rajasthan, and demanded that immediate should be actions be taken against the culprits. They have filed compliant with the chief minister, the district superintendent of police DSP.
—
*With Mahiti Adhikar Gujarat Pahel, Ahmedabad

India - The Muslim Bogey
Art of Living Still To Pay NGT Fine - Sri Sri where are you ?
Unwelcome Modi to Silicon Valley, Sep 27
Mumbai - New shelters for cow, not for humans #WTFnews