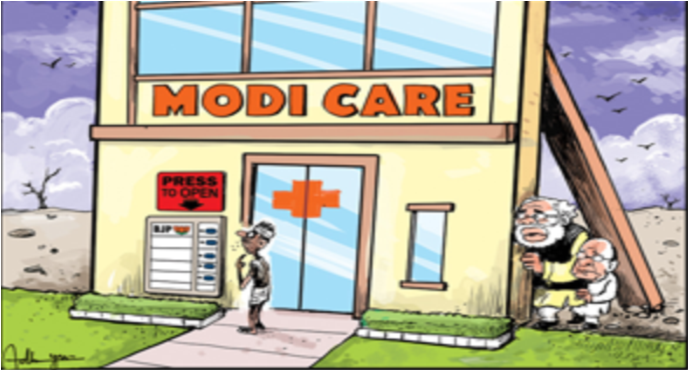 Five charges on which the Modi-led BJP regime stands guilty for betraying people’s health, while making false claims to cover its failures

Prime Minister Modi had time to inaugurate Reliance Foundation’s Hospital in Mumbai, but never visited the public hospital at Gorakhpur where more than 70 children died in a week in August 2017 linked with cut in oxygen supply, due to constricted flow of funds

The entire country was shocked when in mid-August 2017, during the span of a week, 72 young children died in the public hospital linked with BRD Medical college in Gorakhpur (constituency of Yogi Adityanath, the BJP Chief Minister of UP). The immediate cause of many of these deaths was reported to be interruption of oxygen supply for the hospital, which was linked with long standing failure of the government to make payments to the oxygen supplier. This shortfall of payments was the final link in a chain of severe health budget cuts by both Central and UP state governments (both ruled by BJP). The deaths of scores of innocent children denied of life saving oxygen is symbolic of a much larger policy of BJP governments – to choke public health services of necessary funds, while promoting the private healthcare industry.

Many of the children who died in Gorakhpur in that tragic episode had encephalitis (brain fever).  It is notable that in 2016-17, the State government, instead of allocating Rs. 30.40 crores from it’s own financial resources for the programme dealing with encephalitis (which also supports special children’s wards in hospitals like Gorakhpur), asked for such funds from the Central government. However barely one third (Rs. 10.19 crores) of the required was approved by the BJP-led Central government! In 2017-18, despite worsening encephalitis situation, budget approved for the programme was further slashed to just Rs. 5.78 crores!

Sufficient budgets for public health services are critical to ensure adequate health care, especially for poor people in our country. The BJP, which had promised to provide ‘health assurance’ has not only continued to neglect the health-sector but has continued the trend of grossly inadequate health budgets.  Since our Prime Minister claims to be committed to improving healthcare for ordinary people, let us see how public health budgets have been faring under BJP rule at national level:

Not just lack of oxygen, but callous neglect of public health services and slashing of health budgets under BJP regimes – at central as well as state levels, has snatched away lives of innocent children in Gorakhpur! Who is guilty for these insufficient budgets?

The central Clinical Establishment Act (CEA, 2010) is meant to regulate private hospitals in various states. However under the BJP regime, implementation of this act did not receive any support, in fact BJP governments at central as well as state levels have dragged their feet in checking blatant profiteering by corporate and private hospitals. The CEA rules include the provision of regulation of the charges to be levied by hospitals. However, this provision has not been implemented in any of the BJP-ruled states in which this law has been made applicable. Further, the essential standards under CEA which are required to fully implement the act are ready, but have not been notified by central govt. over the last three years! As a result, the Clinical Establishment Act still remains largely on paper even in those states which have adopted it. This has further emboldened corporate and large private hospitals to exploit patients.

The tragic incidence of 7-year-old Adya Singh at Fortis Hospital, Gurgaon, Haryana in September 2017 is an eye opener case regarding corporate exploitation of patients in India. The hospital charged huge margins on consumables and medicines, just 15 days treatment cost her family Rs. 16 lakh rupees, and unfortunately the patient died.

Massive overcharging of patients in large private hospitals is not unique to Fortis hospital, Gurgaon. In February 2018, the National Pharmaceutical Pricing Authority (NPPA) analysed hospital bills and brought out a report in February 2018 exposing huge profiteering by corporate hospitals in consumables! An analysis of bills from four reputed private hospitals in Delhi and NCR by NPPA has revealed that they are making profits of up to 1,737% on drugs, consumables and diagnostics, which account for about half of a patient’s bill. The NPPA’s shocking analysis came after complaints of overcharging by families of patients who died from dengue and other ailments. Patients in all cases had complained that the initial estimate of expenditure got inflated by the hospital by three to four times. NPPA recommended that the Government cap the profit margin of hospitals in consumables and diagnostics to protect patient’s interests. Despite this, Modi Government has not taken any action against profiteering by hospitals. Instead of acting on the hospitals, the Chairperson of NPPA was transferred out by the government within 10 days of their revealing report!

It is also relevant to note that BJP’s Karnataka CM candidate Yeddyurappa has publicly opposed regulation of rates in private hospitals, which was proposed under Karnataka Private Medical Establishment Amendment Bill in December 2017!

In the recent ‘Bharat Ki Baat’ programme in London, PM Modi boasted that it was due to his initiative that prices of cardiac stents (used in angioplasty surgery) were brought down. This claiming of credit for this step is a plain lie. While capping of prices of cardiac stents, bringing these down upto four-fold was definitely positive, it was forced on the government by the Delhi High Court order!  Adv. Birendra Sangwan had filed a PIL in Delhi High Court in 2014, with plea to regulate these prices. This was supported by a campaign led by All India Drug Action Network (AIDAN). However, the Central Government did not even respond to an order by the Delhi High Court to cap prices of stents. It was only after a contempt of court petition filed in July 2016 that the National Pharmaceutical Pricing Authority took steps and capped the prices of cardiac stents.

Who should get genuine credit for capping the prices of cardiac stents?

Under leadership of Chairperson Bhupendra Singh, the National Pharmaceutical Pricing Authority also used its emergency powers to fix maximum prices of knee implants, bringing down their prices to nearly one-third of what was being charged. In February 2018, NPPA analysed hospital bills and documented huge profiteering (up to 1700%) by corporate hospitals in sale of consumables! But  instead of appreciating this upright official, within ten days of this explosive report, NPPA Chairperson Bhupendra Singh was transferred under pressure from healthcare industry, before he could complete his term in the NPPA office. He who claims to be the ‘chowkidar’ of the country was either ignorant or involved in punishing the upright officer Bhupendra Singh!

In April 2017, NITI Aayog recommended that the Drug Price Control Order to be delinked from the National List of Essential Medicines, which means that  prices of all essential medicines will no longer be controlled and they will become more expensive. Just a few days back, Niti Aayog has proposed that the Central government can exempt any drug from price control if there (vaguely defined) “sufficient competition” – opening the way for prices of over 350 essential medicines to be removed from price control, leading to increase in costs for ordinary people. Secondly, the prices of only those essential medicines would be brought down, which are higher by 10% or more compared to the current ceiling prices. If this proposal is accepted, around 40 per cent of the drugs that are currently under price control would go out of it.

The Prime Minister’s rhetoric about making medicines more affordable is just another jumla … under the BJP regime, medicines will become even more expensive as Niti Aayog prescriptions get implemented!

As an aside it may be noted that while the PM accuses Indian doctors of being agents of pharma companies, Sun Pharma were ‘Diamond Patrons’ for his massive foreign publicity event!

Recently in London, PM Modi accused doctors in India of having links with pharmaceutical companies, by writing prescriptions of specific brands to make money. While such nexus is a reality, hearing this from the PM is really ironical since Sun Pharma, a huge pharmaceutical company was one of companies which sponsored the PM’s massive publicity event in New York!

Blaming doctors to cover up his government’s policy failures, and at the same time accepting sponsorship from Pharma companies is another hypocrisy by our PM.

Another promise has arrived! But promises can be scary especially when the Modi-led BJP Government is involved! PM Modi has now declared that under the ‘National Health Protection Scheme’ (NHPS), 50 crore poor people would get health insurance coverage for Rupees 5 lakh each. However this scheme, launched in the final year of the government’s term, will be a non-starter due to many reasons. The accompanying budget is abysmally inadequate (only Rs. 2000 crores, amounting to Rs. 40 per person per year, barely enough to buy one strip of tablets). Even the later projected amount of Rs. 11,000 cr. is less than half of the minimum amount required for this scheme. Finally, whenever it is fully rolled out, given the experience of similar schemes until now it will mostly boost profits of insurance companies and corporate hospitals, while it is unlikely to reduce costs of care for people in any significant way.

It seems that the purpose of this hastily announced scheme is mainly election management, and to cover up various failures of the government in the Health sector. This scheme is like old bad wine in a new bottle, because existing government health insurance schemes already cover close to 40 crore people! Major schemes like Rashtriya Swasthya Bima Yojana (RSBY) have failed to provide people financial protection, have often increased rather than decreased out of pocket expenditure incurred by the beneficiaries. There is no evidence that NHPS will correct the distortions associated with RSBY, so results may be similar. NHPS will not provide ‘Health Assurance’ to all since 80 crores (60% of the population) is left out; outpatient care (responsible for 70% expenses by people) is not covered; and being a hospitalisation scheme there is no linkage with preventive or promotive health care, which is required to minimise illness.

While this scheme has been launched too late to make any significant impact in the next one year (beyond election promises), down the line big private hospitals and insurance companies will be the biggest beneficiaries of this scheme, since they will get millions of patients to treat and over-treat, charge and over-charge, while also being paid by the government. Ordinary people will only get a health insurance card, and some access to hospitalisation care, but not necessarily rational or necessary health care, and definitely not the range of services and conditions required to be healthy.

All the indications are that this promise of ‘Rs. 5 lakh health insurance’ may go the same way as the earlier promise of putting 15 lakh rupees in every bank account! But hopefully the people of India would have learned from their earlier mistakes, and would not be taken in so easily the next time they stand in front of the ballot box.

These five charges are just a few examples of the multiple failures by this government in the health sector, which deprive it of any moral right to rule over the nation for another five years. It is high time that we realise the true agenda of Modi-led BJP across the country, and in all sectors – enabling their favourite corporates to make super-profits, while trampling on rights of ordinary people.

In the coming elections, let us stand up for our rights, and teach a lesson to those who have betrayed people’s interests on every front!

NOW is the time to demand that health care must be a fundamental right, and everyone must have access to good quality health care and healthy conditions of life!