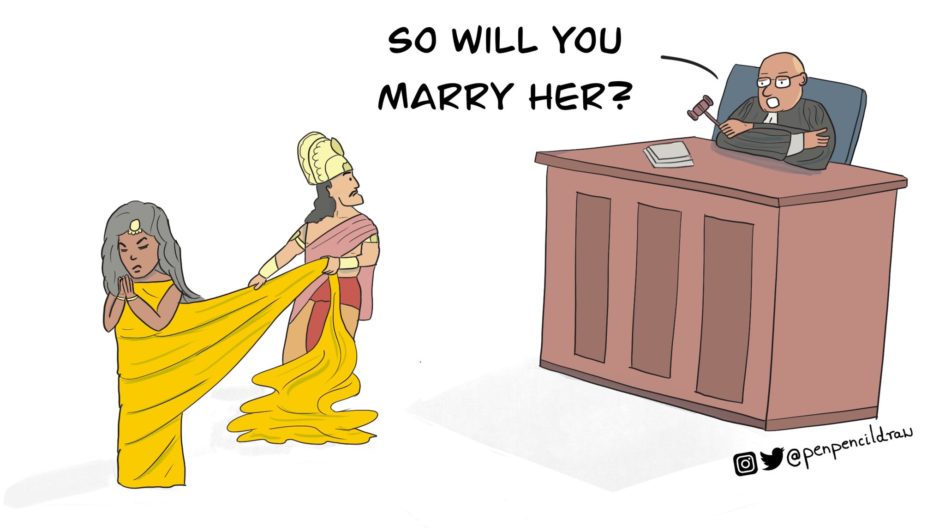 By- Maitreyi Krishnan, Convenor ALL INDIA LAWYERS’ ASSOCIATION FOR JUSTICE

“A fortiori, the duty of the State, therefore, is to provide a safe environment, at all times, for women, who constitute half the nation’s population; and failure in discharging this public duty renders it accountable for the lapse. The State’s role is not merely
reactive to apprehend and punish the culprits for their crimes; its duty is also to prevent the commission of any crime to the best of its ability. Crimes against women are an egregious violation of several human rights demanding strict punishment with
deterrence to prevent similar crimes in future by the likeminded.” (1)

AILAJ expresses grave disapproval and condemnation of the manner in which two cases that came up on 01.03.2021 before a bench headed by the Chief Justice of India (CJI) were dealt with, and the comments made during the proceedings.

In the first case of bail, a government employee was accused of repeatedly raping, stalking and threatening a girl when she was aged 16 years, and was charged with offences under the Protection of Children from Sexual Offences Act, 2012. The CJI is reported (2 ) to have said “If you want to marry we can help you. If not, you lose your job and go to jail. You seduced the girl, raped her”. On the lawyer for the accused informing the Court that the accused was already married, the Court disposed the matter by granting him protection for arrest for 8 weeks. Incidentally this suggestion flies in the face of judgment of the Supreme Court in State of Madhya Pradesh vs Madanlal [(2015) 7 SCC 681] which held that “in a case of rape or attempt of rape, the conception of compromise under no circumstances can really be thought of”. In fact the Court deprecated the marry-your-rapist deception as “nothing but putting pressure in an adroit manner; and we say with emphasis that the Courts are to remain absolutely away from this subterfuge to adopt a soft approach to the case, for any kind of liberal approach has to be put in the compartment of spectacular error”. Furthermore, in Shimbu vs State of Haryana [AIR 2014 SC 739], the Supreme Court held that the offer of the rapist to marry the victim cannot be construed as special factors for reducing the sentence prescribed by the statute.

In the second case, the Bench headed by the CJI stayed the arrest of a man accused of rape by his former partner, who had raised allegations that the accused man had brutally exploited her and violently beat her causing injuries.

The CJI reportedly (3 ) asked “… however brutal the husband is… when two people (are) living as husband and wife… can sexual intercourse between them be called rape?”. The CJI is reported to have asked “If a man and woman are living together, however insincerely… as man and wife… The man may be brutal and may do many wrongs (but) can you call it rape?”

Thus, in one instance, relief is offered to the alleged rapist if he marries the girl he repeatedly raped when she was a minor, while in another, marriage is used as a reason to justify rape. The understanding appears to be that marriage absolves the rapist of the crime and also that once a woman is married to a man, she is his to abuse, injure and rape with impunity. Marriage is sanctioned as the tool, which casts a woman out of the ambit of protection of rule of law constitutionally guaranteed in this country.

It is of grave concern that the CJI has made such comments, which are not only retrograde, but are in fact dangerous precedents. On the contrary the message that ought to be given is that any infringement on the dignity of women and endangering of their safetywould be dealt with strictly.

As Praktiksha Baxi writes (4)
“When courts arrange marriages as if they were marriage brokers, they inaugurate a new form of marriage, sociologically speaking. These newer forms of socio-legal marriages, which may be characterized as “compromise marriages”, amount to legally-mandated forced marriages. “Compromise marriages” are a
comprehensive violation of a woman’s right to be human, her right to life and dignity; and freedom of choice and expression… Forced into marriage, where rights to complain against sexual abuse are suspended, marriage to a rapist is solely constituted through the desire and the right of the husband over the traumatised mind and body of the wife-victim. The rights of the rapist-as-husband are then a macabre gift of modern Indian law, to be framed along with other celebratory pictures of patriarchal justice in the archives of our male-dominated courts.”

The CJI’s statements are an affront to the Constitutional guarantee of equality, and reduce women to the status of lesser citizens. It is a comprehensive violation of a woman’s right to be human, her right to life and dignity; and freedom of choice and expression. As Justice Chandrachud held in Navtej Singh Johar vs Union of India
[citation], “We must, as a society, ask searching questions to the forms and symbols of injustice. Unless we do that, we risk becoming the cause and not just the inheritors of an unjust society”. By these statements, the Supreme Court faces this exact risk.

Under Article 51A(e) of the Constitution of India, it is the duty of every citizen to renounce practices derogatory to the dignity of women. As a citizen, given the grave responsibility of high public office, the CJI has acted contrary to the Fundamental Duty
imposed upon him by the Constitution of India. It must be noted that the Judiciary in India is accountable not only for the judgments it pens but for every remark made by it in official capacity.

Statements made by the CJI will have a huge impact on minds across the country. Statements made in open court must be in consonance with the dignity of the office and must not promote denigration of women. In view of this, we demand that the CJI issue a formal apology.

1 Report of the Committee on the Amendments to Criminal Law, 23rd January, 2013
2 https://www.ndtv.com/india-news/supreme-court-asked-government-employee-accused-of-rape-willyou-marry-her-2381025