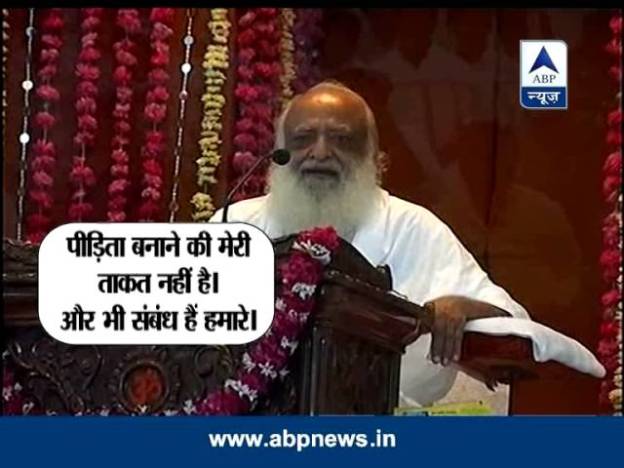 It is humbly requested that I am…………, studying in class 12 at Shri Asaram Ji Gurukul located at Parasiya Road, Chindhwada, Madhya Pradesh. I live with my family consisting of my father Shri……… Singh, mother ……….Singh, elder brother ………Singh and younger brother …………Singh.

One day I suddenly felt faint and a bout of vertigo. I was told by the hostel warden, Shilpi that this was because of the influence of ghosts/spirits. She also said that she would speak with Asaram Bapu about the matter. On 07.08.13, Shilpi telephoned my house and said that I was unwell and also advised the family to take me to a big city for treatment.  On 08.08.13 my parents reached my Gurukul between 10-11 p.m. I had spoken to them on the phone. My parents came to the Girls Hostel on 09.08.13 to take me back. There, they spoke to Shilpi who told them that I was under the influence of ghosts and spirits and that she had told Asaram Bapu about this. She also said that Asaram Bapu had calle dme  , and that my  parents should quickly take the girl  to wherever Asaram Bapu is at that time.

We reached home, Shahjahanpur, on 09.08.13 itself. My father then found out that Asaram Bapu was due to go to Delhi on 12.08.13. We reached Delhi on 13.08.13, but we came to know that Asaram Bapu had gone to Jodhpur, Rajasthan. Then Shiva, who works as an employee of Asaram Bapu told us that Bapu was in Jodhpur and that we should proceed there directly. Accordingly, on 14.08.13 we reached village Manhi located ahead of Jodhpur. When I reached there, the gate was closed and the sadhaks were standing outside. My father called Shiva who got the gate opened. When we entered, Asaram Bapu was sitting on a chair and conducting satsang. We went it and sat. A little while later, he asked us where we had come from. I replied that I was a student at the Gurukul. He replied saying that he would exorcise the ghost. Then he had me speak to my future. That night he sent a servant to call three of us to him. He showed us our hut and sent us away after giving us prasad. We stayed in the room given to us by him. The nest day, 15.08.13, he sent food for us and conducted satsang. That night, Bapu again called us to the hut and initially spoke with my parents. He told my parents to sit near the gate and pray, meditate and leave after a while.

He made me sit on a raised platform (chabutara) behind the hut and gave me a glass of milk. Once I drank the milk, he told my parents to leave. They didn’t leave immediately, but my father left eventually. My mother remained sitting. Bapu went through a door in front to his room. After a while, he switched off the light of his room, exited through his back door and called me inside. Once I went inside he made me sit beside him and started talking to me. Then he asked me to go and check what my parents were doing. I returned and told him my father had left but my mother was still sitting outside. Bapu then locked the door and began touching me inappropriately. When I started screaming, he said that he would get my parents killed and scared me into silence. Bapu kissed and touched me inappropriately all over my body. He told me to perform oral sex on him. He was not dressed and he started undressing me forcefully. When I started crying and shouting, he clamped my mouth shut. He molested me for about an hour – hour and half. Two or three of his servants were present outside the room we were in. When I managed to leave the room, Bapu again threatened me, and told me not to speak about the incident to anyone. Then I returned with my mother to the room where we were staying in.

On 16.08.13, Bapu left for Delhi. Before leaving he told my father that he should send me to Ahmedabad, Gujarat. There she will perform 7-8 rituals and then I will send her back to Chindhwada. However, after the incident that happened with me, I did not go there and after reaching home, I told my parents all the details of the incident so that investigation is conducted against Asaram Bapu, Shilpi Warden and Shiva.

Debt and bureaucracy deal death blow to MP farmers reeling from Covid impact
‘Not Hindu’: Scientist booted out from US garba #WTFnews
How the other half dries
Kashmir Torture - Roller over legs, dipped in chilli-water, forced to drink acid #WTFnews