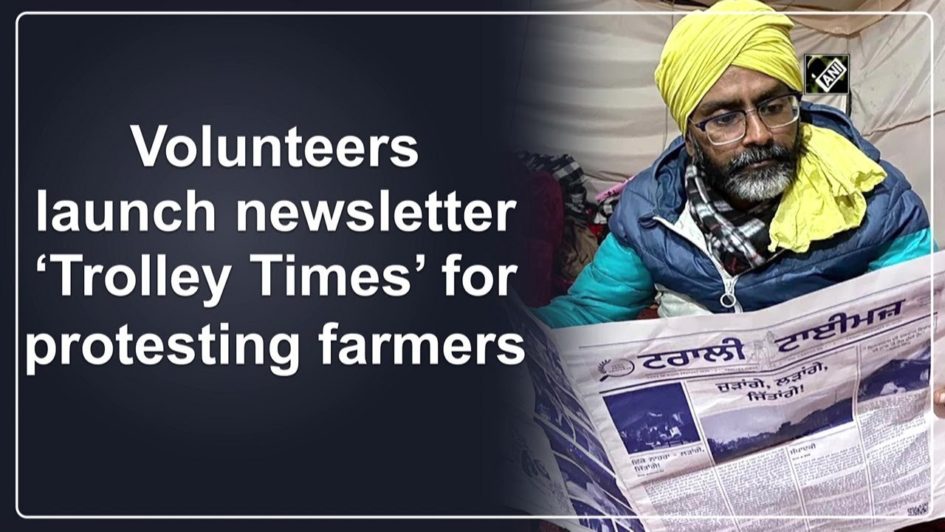 Trolley Times is a paper brought out by like minded people – writers, artists, activists in support of the Kisan Morcha.

It is not the official mouthpiece of the Sanyukt Kisan Morcha

Reporters were aplenty; an army of amateur photographers was ready with the feed, a trailer became their editing desk, and soon came out the first edition of 2,000 copies of four-page bilingual paper. It was an instant hit on Friday.

Over 95,000 trolleys are lined up in the crack of winter at Delhi borders, protesting over the farm bills. In this newsletter, we are trying to bring out protesters’ stories to them while they are camped out at Delhi borders. Our intent, without malice and an ulterior motive, is to simply represent peoples’ voices.  In order to do so, we are reaching out to different writers and artists to seek their contributions. We are aware that partisan publishing representation can create rifts in the movement. Our team works round the clock to choose write ups that look beyond such differences and commit to the progress of current movement that is exemplary because of the unity of farmers, labourers and other sections.

“Looking at the response, we are going to print 10,000 copies of the next issue,” says Ajaypal Natt from Mansa, a physiotherapy teacher. He along with Surmeet Mavi, Gurdeep Singh and Narinder Bhinder conceived the idea. The name, Natt says, was floated by one of us just out of fun. “But we instantly picked that,” he says.

The style of the paper, he says, will be conversational. “We want it to read like the discussions taking place in village sath (common place),” he says, adding “we have a platform now to counter all kind of trash being dished out by some sections of media.”

The first issue of the paper carried Bhagat Singh’s quote on struggle; photographs from the centre of the struggle; story of a woman farmer, Gurmail Kaur, who died during the protest; some works of art and the lead article gave the message of unity, struggle and victory. The paper was simultaneously launched digitally on all social media platforms like Facebook, Twitter, etc.

The paper is made to clarify the real news in the midst of fake news, printed in Punjabi and Hindi, this four-page humble beginning is written with hope and optimism.

On the first page we will have briefs on the direction and the state of the morcha. Rest of the pages will contain writings, pictures and artworks by contributors.

Trolley Times is inspired by the historic mobilisation and able leadership of all the farmers and farmworker organizations. The morcha has provided vigour to the farmers and farmworkers of not only the Punjab-Haryana region but all over India. On the one hand, the organizations have empowered and organized people to create the mass political awakening, on the other hand, the leaders of the organizations have pressurised the ruling and opposition political parties to speak the language of people’s welfare. It has brought hope to well wishers of solidarities and welfarist policies all over the world.

The organizations’ leadership has worked resolutely to tread the ideological differences between themselves and bring this united movement to a point where its ultimate conclusion is victory.

Read english version here – it can be downloaded and read from here https://drive.google.com/file/d/17s4_JW3HIfsmqoW4MTiLnmzHJ9pl7SyV/view
E copy of Trolley Times Issue 22-12-2020 is available to download.A Punjabi-Hindi newsletter for the #FarmersProtests from the Farmers Protest Sites
http://trolleytimes.online/pdf/TrolleyTimes_Punjabi_22-12-2020.pdf