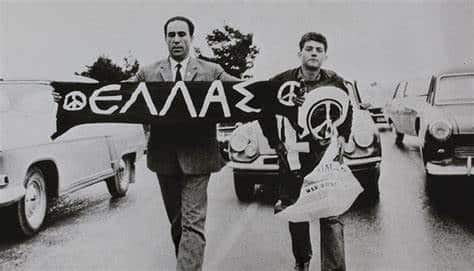 Memorial to Grigoris Lambrakis in Greece.

On 27 May every year, the Greek Affiliate of IPPNW and the Peace movement in Greece commemorate the anniversary of the assassination of Grigoris Lambrakis in Thessaloniki in 1963.

The life and death of Lambrakis inspired the author Vassilis Vassilikos to write the political novel “Z.” The title stands for the first letter of the Greek word “Zi” which means “[He] Lives!”In 1969, the Greek-French film director Costa-Gavras made the film Z, which found international acclaim. “Z” appeared in graffiti all over Athens and became an international symbol for peace and democracy. Unfortunately, the younger generation of peace activists today know little of the life and death of Lambrakis which could serve as an example to us all.

Grigoris Lambrakis (3 April 1912 – 27 May 1963) was a medical doctor, a Member of Parliament, an athlete and a member of the faculty of the School of Medicine at the University of Athens. He is also a peace martyr and inspiration for the international peace and anti-nuclear movement.

Born into a poor family in a small village, Kerasitsa, Lambrakis became a champion athlete throughout his life. He held the Greek record for long jump for twenty-three years (1936–1959). He also earned several gold medals in the Balkan Games. He competed in the men’s long jump and the men’s triple jump at the 1936 Summer Olympics. He used athletics to promote in difficult times the brotherhood between Balkan nations, and he was close friend of the Turkish champion in triple jump Tafic.

During the Axis occupation of Greece  from 1941 to 1944), Lambrakis participated actively in the Greek Resistance. In 1943 he set up the Union of Greek Athletes and organized regular competitions. He used the revenue from these games to fund public food-banks for the starving population.

After World War II, Lambrakis completed his medical studies and worked as a lecturer in the Department of Gynaecology. During his brief life he published more than 40 scientific papers and the first 3 volumes of a Greek book of Endocrinology, at the time when there was no specialty of Endocrinology in the country (1954-1956). He continued to help the poor by running a small private clinic for patients who were unable to afford medical care.

While not a Communist, Lambrakis’ political and ideological orientation leaned towards the left. He was actively involved in the pacifist movement of his time and he was elected to the Hellenic Parliament in the 1961 Greek legislative election  as a Member of Parliament for Piraeus.

That same year in 1961, under his initiative, the Commission for International Détente and Peace (EDYE) was established in Greece. In his capacity as Vice President of EDYE, Lambrakis participated in international pacifist meetings and demonstrations despite frequent threats against his life. On 21 April 1963, the pacifist movement in Greece organized the First Pacifist Rally from the town of Marathonas to Athens. The police intervened, banned the rally and arrested many demonstrators. Lambrakis, protected by his parliamentary immunity, marched alone and arrived at the end of the rally holding the banner with the peace symbol (photo), the same one that he had previously held up during the Aldermaston rally in the United Kingdom while he was protesting near the Atomic Weapons Research Establishment (AWRE). Soon afterward, he too was arrested by the police.

On 22 May 1963, shortly after he had delivered the keynote speech at an anti-war meeting in Thessaloniki, two far-right extremists, Emannouel Emannouilides and Spyros Gotzamanis, driving a three-wheeled vehicle, struck Lambrakis over the head with a club in plain view of a large number of people and, allegedly, some police officers. He suffered brain injuries and died in hospital five days later, on 27 May. The two men were arrested because of the reaction of a by-stander, Manolis Hatziapostolou, going by the nickname Tiger, who jumped on their vehicle and fought with them.

The next day, in Athens, his funeral became a massive demonstration. More than 500,000 people rallied to protest against the right-wing government and the Royal Court.

The events that followed the assassination of Lambrakis led to rapid political developments. Prime Minister Konstantinos Karamanlis resigned and left the country for Paris in July 1963. Soon thereafter, thousands of Greek youth founded a new political organization called the Lambrakis Democratic Youth.  Mikis Theodorakis, one of Lambrakis’ friends and fellow activists, was elected its first president. This leftist political organization played a decisive role in Greece’s progressive movement of the 1960s.

Lambrakis remained in the hearts of the Greek people as a national symbol of democracy, representing the struggle against political repression, Royal Court scandal, and international dependence. During the military dictatorship in Greece (1967-1974) it was forbidden even to speak about Lambakis. People were imprisoned because they possessed even his scientific papers.

In order to save his medical work and because he is an example for physicians who work for a nuclear free world the Greek Affiliate of IPPNW in 1988 asked Maria Arvaniti Sotiropoulou, to write the book “Grigoris Lambrakis, the pioneer pacifist MD.”

The International Peace Bureau (IPB0 honored him after his death with the Golden Peace Medal and created in 2015 a “Lambrakis Peace Medal.”

After the seven-year military dictatorship fell in 1974, numerous places, streets and squares throughout the country, have been named in honor of Grigoris Lambrakis and the Greek Parliament honored him unanimously in 2013.

The Marathon Peace Rally became an annual event in Lambrakis’ memory every May. The Athens Classic Marathon is run in memory of Grigoris Lambrakis every November. The organizers created a documentary  (in Greek) presented at the 50 anniversary.

Today at a time when the nuclear danger seems closer than ever and ICAN is promoting the signing or ratification of the Treaty on the Prohibition of Nuclear Weapons, the example peace martyrs like Lambrakis should be promoted worldwide.

Maria Arvaniti Sotiropoulou is President of the Greek Affiliate of IPPNW and campaigns for ICAN in Greece.