India – Does Bharat Mata have a choice ? #Vaw 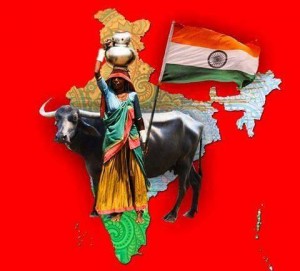 Shachi is an independent researcher with an interest in the anthropology of development, culture.

The quest for freedom has been a markedly passion fueled fight throughout human history. Freedom from cruel rulers, colonizers, slavery, church intervention, torture; freedom to express, work, travel, marry a person of one’s own choice, the list is endless. In India, history textbooks boast of a strong freedom struggle, marked by ideologies as distinctly apart as the patience of Gandhian philosophies and the youthful fervor of Bhagat Singh and his comrades. There are poems and sagas on the sepoy mutiny in 1857, the first war for India’s independence, followed by 90 more years of colonial rule due to the lack of unity and organization amongst smaller Indian kingdoms and rulers, among other reasons. The fight for self-rule or Swaraj was long and as India assumed ‘her’ sovereignty after the prolonged struggle, ideals of democracy painted the new nation that was to be. As a society that is extremely diverse, culturally, geographically, politically, and economically, India is a nation as unlikely as it can be. The beauty of India lies in the chaos that is produced as the differences come together, and also, in its tolerance for these differences and freedoms, thus upholding the democratic ideals her people fought for.

Nonetheless, the emergency in 1975-77 marked a dark phase in people’s freedoms. It clamped down on the democratic ideals of the state and power was concentrated with a few. With the revival of democracy, the growth of a new political consciousness with the catalytic presence of judicial activism, one saw a revival of the freedoms. This much celebrated freedom seems to be becoming a bone of contention recently in the Indian democracy. The anger at Nivedita Menon’s speeches on national identity, the recent suspension of Maharashtra State Assembly member Waris Pathan for not saying ‘Bharat Mata ki Jai’ in the House, the sedition charges against students of JNU and their supporters, the struggles of JagLAG and Soni Sori, the suicide of Rohith Vemula- are all cases where extreme name calling, anger, and even violence has taken place over certain people’s choice to exercise their freedom of expression in criticizing the state. In many more cases that haven’t turned physically or verbally violent yet, this violence is taking places through systemic changes in the funding, management and regulation, as in the case of educational institutes like FTII, JNU etc. There is also a thumping support of such actions, by a large chunk of the middle class, which seems to be thirsty for a developed nation even if it comes through an authoritarian government. The same ‘inquilab’ and ‘azadi’ that gives goosebumps to people when heard in a patriotic song seems to be offensive and anti-development when chanted against the powerful. It’s offensive to Bharat Mata, the much revered female poster deity for Hindu Nationalism.

To most patriotic Indians, the question is ‘What is wrong in saying Bharat Mata ki Jai?’ or ‘Why would you say Pakistan Zindabad when staying in India?’ The questions are valid enough to be raised, but they are also entrenched in privileged rhetoric, with little consideration for what the reason could be for such a ‘petty’ refusal or such seditionist statements. We demand for highways and industries, without consideration for the populations that have to give up their livelihoods and homes to allow this convenience. We do not question why Kashmiri students studying in a top college in India would be cribbing about the nation. Maybe the dominant embodiment of the nation that they see is not so pleasant under AFSPA. Maybe there is no place for the Kashmiri people’s voice in the territorial dogfight between two nations. The monotheistic religion of Islam does not condone idol worship or worshipping multiple deities. So while Indian Muslims may be comfortable in saying Jai Hind, they may not wish to say ‘Bharat Mata ki Jai’. It is possible that those who refuse to say the phrase are aware of its right wing theocratic origins (as traced here), and hence understand the symbolic contemporary identity of the phrase. In such a case, a purely political reason may demotivate one to say the phrase, despite its seemingly innocent meaning to the layman. I personally do not want to say ‘Bharat Mata ki Jai’ because it feels hypocritical to behave like I am upholding the great maternal, female identity of my nation when I see it being run in a patriarchal, intolerant way. Bharat Mata is the typical poster girl, clad in what the men who ‘protect’ her would imagine her to be wearing, tight-morally and otherwise. Somehow, the quest for freedom seems to be in the way of this identity, facetiously passed off as a rebellion by the teenage intellectuals, unaware of the reality of the world, looking for the ever elusive Azadi.

This portrayal raises a bunch of questions that are unanswered. Are demands for ‘azadi’ from blind state worship, systems of power and exploitation, such an impediment in the identity of Bharat Mata? Is the idea of Bharat Mata not ironic, given the depth to which the roots of patriarchy infiltrate our society? Is it not ironic that the Gau Maata and Bharat Maata which must mandatorily be respected and protected are bound by ideas of selfless giving and motherhood? Is the maata really not okay with being called by other names? Does the maata get to retaliate when her rights are violated, or is she an eternal symbol of sacrifice and docility? Where does the maata go when her resources are stripped to bring about development and when other females are stripped of their dignity on a daily basis? Is this benevolent, great mother in such great need of patronizing protection from the same men that threaten it when it isn’t dressed in a tri color sari? Will the mother ask me to go to the neighbors’ place if I happen to get in an argument with her? Am I not patriotic if I criticize my nation for knowingly or unknowingly allowing exploitation of its people?

Nationalism is a feeling indoctrinated in us throughout our lives. It isn’t open to questioning and it definitely isn’t open to interpretation. The idea of the great Indian nation is reproduced in text books, songs, television shows, newspapers, speeches, advertisements and innumerable symbols and semantics. Schools, especially, become the site for indoctrination and conditioning into ideas that bring about a uniform, orderly citizen. As a child enrolled in an Indian school, we come across quite a few activities that instill in us a sense of allegiance to the nation. This allegiance isn’t to be questioned or misrepresented.

On the occasion of the national holidays i.e. Independence Day and Republic Day, my school from childhood had patriotic song competitions, apart from the flag hoisting and national anthem rituals. Every class was made to participate and more often than not, there was a small tableau showing famous leaders and iconic figures who were considered essential to the idea of India. For two of these competitions, owing to the assumption that since my mother owned a salon and would therefore be used to waking up at five and dressing her daughter in a sari and stage level garish make up, I was chosen to play Bharat Mata. My dispensable singing abilities added to the choice. On one of these occasions, our class ‘2 A’ sung brilliantly and the Gandhi in our class looked very real because he had just gone bald…all in all, the recipe for a winner. Nonetheless, we didn’t win the competition because Bharat Mata a.k.a yours truly, held an inverted tricolor throughout the song. The green was on top (Oh, the horror) and the saffron at the bottom. Soon after the result was announced, I could feel the gaze that made me feel guilty for a silly mistake. What I didn’t realize was the symbolic connotation of mistakes such as these. To me, it was the same flag either way and since no other country had ownership over the innovative flag I swayed, I had still been holding up my virtuous Bharat Mata-ness. What I now realize is that were I to make the same mistake as an adult today, the consequences would be a lot more than not getting a top position in the competition. I would be a sickular/leftist/blind liberal/over-intellectual/someone in urgent need for a visa to Pakistan. In reality, I was just late, confused, lost and maybe a tad bit high, on patriotism.http://www.indiaresists.com/bharat-mata-choice/

Another Draconian Bill from Gujarat
India and this perverse rage against the poor
Born in Dalit Sikh family, unsung, Udham Singh 'avenged' Jallianwala massacre
A Letter to Biden on Gaza