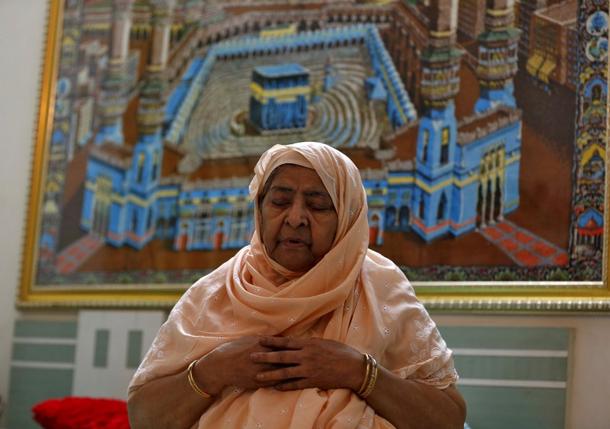 Zakia Jafri, whose late husband, a lawmaker for the Congress party which now sits in opposition, and was hacked to death by a Hindu mob in riots, offers prayers inside her son’s house in Surat, India, September 15, 2015.
REUTERS/AMIT DAVE 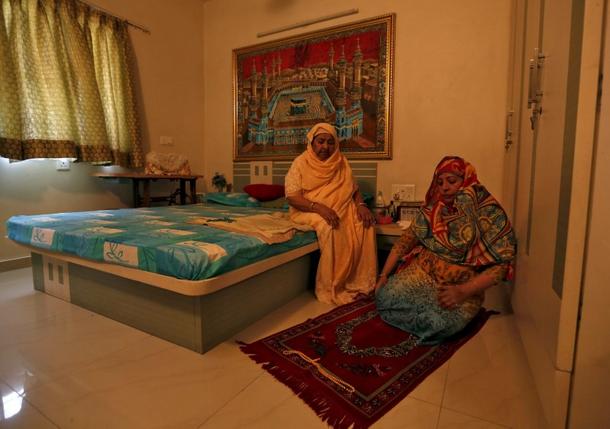 Zakia Jafri, a frail 76-year-old, has begun what may be the last legal battle to pin blame on Indian Prime Minister Narendra Modi for deadly riots that shook the state of Gujarat when he was chief minister, and claimed her husband’s life.

Modi denies any involvement in the 2002 unrest, one of the worst outbreaks of religious violence in independent India. In 2013, a panel appointed by the Supreme Court said there was insufficient evidence to prosecute him.

It was the third investigation to come to the same conclusion.

Since then, the prime minister has shed his international image as a hardline Hindu nationalist, adopted the mantle of progressive economic reformer, won a landslide election in 2014 and earned a place at the high table of global leaders.

His government has also cracked down on NGOs and rights workers, including activist Teesta Setalvad, who has been helping Jafri gather evidence to overturn previous court rulings in Modi’s favour and bring him to trial.

At around the time the Gujarat High Court agreed to hear the case last month, federal police investigating alleged fraud raided the home and offices of Setalvad, who has represented dozens of victims of the riots and won several convictions.

None of that deterred Jafri, whose late husband, a lawmaker for the Congress party now in opposition, was hacked to death by a Hindu mob in riots that killed at least 1,000 people, most from India’s sizeable Muslim minority.

“My case is not just against the foot soldiers,” said Jafri, worn down by 13 years of campaigning, including her failed Supreme Court bid to prosecute Modi two years ago.

Hers is the last case still in the court system filed after the riots that tries to implicate Modi.

“It is against those who allowed the foot soldiers to operate,” she told Reuters in an interview in Ahmedabad, commercial capital of Gujarat where her husband was slain.

“It is against those who created the situation for the foot soldiers to get provoked and enabled them to operate. It is against Modi.”

Setalvad is trying to show Modi turned a blind eye to the violence.

“We are trying to establish a chain of command responsibility. Our task is to show that an individual in the position of power could be administratively or criminally culpable,” said Setalvad.

Setalvad said she pored over testimonies of victims, policemen, bureaucrats, politicians and members of hardline Hindu organisations to piece together Modi’s role in the riots.

Bhatt was a state intelligence officer during the riots and has previously given testimony claiming Modi told officials to allow Hindus to vent their anger for the deaths of 59 Hindu pilgrims in a fire on a train in the Gujarat town of Godhra, after clashes between Muslims and Hindus at the station.

Last month the federal government expelled Bhatt from the police force. He is challenging the move in court.

Interior Ministry officials in New Delhi said the decision to probe Setalvad’s bank transactions and sack Bhatt were not related to the case against Modi.

“It is a coincidence that our orders came at the exact same time when the court case started in Gujarat. They are using the victim tag to hide their mistake,” said a senior bureaucrat at the ministry.

For her part, Setalvad denies accusations by the Gujarat government that she and her husband used money from victims of the riots to enrich themselves.

The Gujarat High Court began hearing Jafri’s petition, which names Modi as the prime accused, this month. She is seeking a criminal trial against him and 58 others for the month-long bloodshed.

For more than a decade the riots tainted Modi’s international reputation. The United States revoked his visa in 2005 over the violence and he only travelled there again after last year’s election. Later this week he embarks on his second U.S. trip since taking office.

Lawyers involved in Jafri’s case said it would take months for the proceedings to conclude, and that it could eventually reach the Supreme Court.

Modi may not be losing sleep yet, although he did inquire who would be presiding over the case, one official in his office said, speaking on condition of anonymity.

Sonia Gokani, the veteran judge in charge, has handled scores of cases related to the riots, handing down several convictions.

For Jafri, what could be her last battle against Modi will bring back painful memories.

She saw her husband, Ehsaan, making desperate calls to the police before being dragged out of his ancestral home by sword-wielding men. Within minutes he was stripped and killed.

“This case is not just about my husband, it is the final attempt to seek justice for thousands of Muslims who expected Modi to save them.”