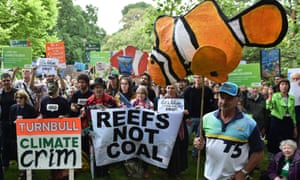 A protest in Melbourne against the proposed Carmichael coalmine, which scientists say should not go ahead if the Great Barrier Reef is to be protected from the impacts of climate change. Photograph: Julian Smith/AAP

Three-quarters of Australians, including most Liberal voters, oppose the government giving a $1bn loan to Adani to build a rail line between its proposed Carmichael coalmine and the Abbot Point shipping terminal.

The rail line, if built, would allow Adani to build the country’s biggest coalmine and open up the Galilee Basin to further mines by linking them to an export terminal.

Coral scientists have argued the coal needs to stay in the ground if the Great Barrier Reef is to be protected from the impacts of climate change. 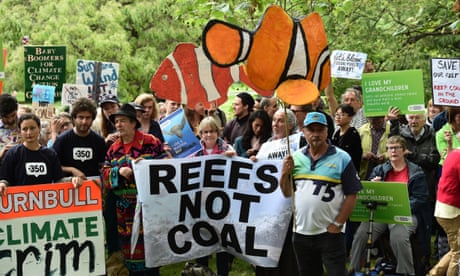 The government has argued there is no definite link between the coal from the Adani mine being burned and climate change, and the resources minister, Matthew Canavan, has said the mine would “be a good thing for the environment”.

But a ReachTel poll of 2,126 people across Australia conducted on 12 January, commissioned by GetUp, found 74.4% of respondents said “no” when asked whether “lending $1bn to an offshore mining company  to build a coal rail line is a good use of public money”.

Just 16.2% of respondents thought it was a good use of public money, with 9.5% saying they didn’t know.

The opposition was strong regardless of voting intention, with 53.7% of those who said they would vote Liberal opposing the loan. Just over 80% of “undecided” voters, 85.5% of Labor voters and 89.9% of Greens voters said the loan was a bad use of public money.

A previous survey of people living in the region that would host the mine found two-thirds opposed public money being used to support the mine.

Analysis from Greenpeace has suggested the rail project does not meet the requirements for a loan under the scheme, since it will not be “of public benefit” and it is not clear Adani will be able to repay the loan.

GetUp’s Miriam Lyons said: “A mere 16% of Australians think this is a good way to invest public money. While we see hospitals and schools starved of resources, the government sees fit to hand over a billion bucks to build Adani’s shiny new train.”

Lyons called on Malcolm Turnbull to stop the loan going ahead.

“Prime minister Turnbull’s not even playing for his own team – only 32% of Liberal voters agree with this use of public money,” she said.