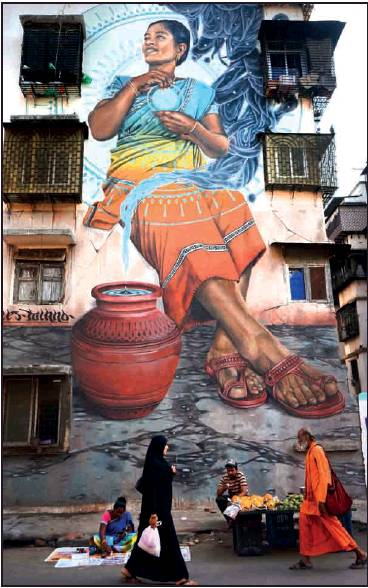 The gritty neighbourhood of Dharavi is getting a new coat. Giant murals commissioned by a notfor-profit that invites artists to work in public spaces are adding a burst of colour.

Since January 15, Elisa Capdevila Galiot has been the centre of attention in a street in Dharavi’s Shahu Nagar as she goes up and down on a crane to paint a 47-foot mural of an Indian woman in blue. “Who’s she?” passersby often ask the 25-year-old Spanish artist. But she is careful not to give a name as the painting is intended as homage to “all the invisible people who keep being warm despite their struggle”.

“I prefer that you invent her name,” says Galiot, whose mural is inspired by a woman in a “beautiful sari” she came across on her first day in the slum. Galiot is also an invitee of the non-profit that wants to make art accessible for all, and is also behind India’s biggest mural of Mahatma Gandhi at Churchgate station and many other paintings in Bandra.

As someone who dabbles in “ordinary topics”, Galiot found herself fascinated by the woman in the sari. “When I asked if I could take her pictures, she obliged and invited us into her house for tea. She told us that she was a widow and that she slept on the floor in the small, cramped room which was basically just a kitchen,” recalled Galiot, who decided to pay tribute to women like her through her painting. While earthy, pastel colours are her comfort zone, the Spaniard found herself getting accustomed to the vibrant hues of her current neighbourhood. “I am not used to putting red beside blue,” said Galiot, who has also changed the patterns of her subject’s sari and tweaked her hair bun into loose tresses “to protect her privacy”.

Despite researching India before her visit, the trip ended up giving Galiot a proper “culture shock” with its povertyridden streets and naked strife. “No other country had done that,” said Galiot, who has done murals in Miami, Mexico and Iceland, apart from Spain.