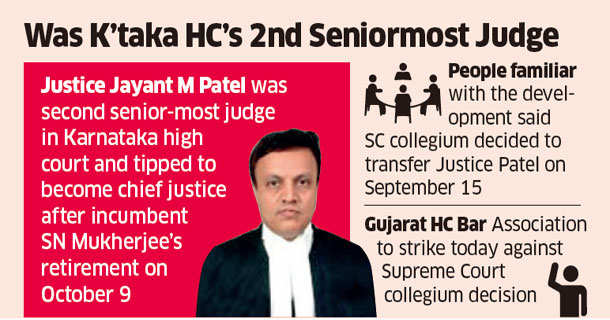 The Hon’ble Chief Justice Of India,
Supreme Court of India,

The decision of the Collegium transferring Justice Jayant Patel to the Allahabad High Court resulting in his supersession to the post of the Chief Justice of the Karnataka High Court has shocked the advocates not only in
Karnataka, but across the country. Justice Jayant Patel is known as a fair, impartial and independent judge. The decision of the collegium to transfer him has once again brought to the forefront the issues relating to the absolute lack of transparency and accountability in the functioning of the
collegium system.

Several attending circumstances raise further doubts as to the propriety of the decision of the collegium. Considering the impeccable recordand clinical efficiency of Justice Jayant Patel, becoming the Chief Justice of the Karnataka High Court was a natural progression in his tenure, which he has now been deprived of.

The timing of the transfer clearly shows that it was intended to ensure that Justice Jayant Patel would not be made Chief Justice of the Karnataka High Court. Further, the transfer being evidently unwarranted at this juncture, having regard to the serious shortage of Judges in the Karnataka High Court, due to more than 50% of the posts of judges being vacant, also, call for disclosure of reasons behind his transfer.

This is not the first time that Justice Jayant Patel has been superseded. Previously, in 2015, when he was the acting Chief Justice of the Gujarat High Court, he was transferred to the Karnataka High Court as the fourth senior judge. We must remember that the last famous supersession happened during the emergency, when Justice H.R. Khanna
was superseded after the infamous Habeas Corpus case.

The lack of transparency and accountability at that juncture had allowed for such grave injustice. It is indeed ironic that after Justice Khanna was vindicated on 24.08.2017 by the Supreme Court in the judgment of the Right to Privacy Case, that the Collegium has taken this decision.

We, the members of the Bangalore Bar are of the opinion that this action against Justice Jayant Patel is symptomatic of the lack of accountability and transparency in the judicial system. This affects the independence of the judiciary and erodes the fundamental values of our Constitution.

Thus, we believe, therefore, demand that in the interest of the independence of the judiciary and the fundamental values of our Constitution, it is absolutely necessary that the Apex court collegiums make public the reasons for the transfer of Justice Jayant Patel, the agenda for the meeting in which the decision was taken and the minutes of the meeting of the Collegiums. We also seek that the order of transfer issued to him be
immediately revoked and his resignation not be accepted.