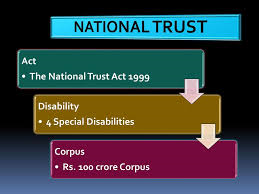 The National Platform for the Rights of the Disabled (NPRD) expresses its strong opposition to the proposal to  repeal the National Trust Act.

Enacted in 1999, the intended aim of the NT Act was the welfare and empowerment of certain categories of disabilities – intellectually disabled, Autism, Cerebral Palsy and those with multiple disabilities.

It is imperative that the NT Act be harmonised with the provisions of the United Nations Convention on Rights of Persons with Disabilities (UNCRPD), which India had signed in 2007. Consequent to this, we had also enacted the Rights of Persons with Disabilities Act in 2016. The inexplicable delay in amending the Act notwithstanding,  the proposal to repeal the Act in its entirety is unacceptable.

The NT has been without a full time chairperson for the last six years. Its Board has been made redundant and it is functioning in an undemocratic manner relying heavily on the bureaucracy.

Despite its many drawbacks and non-fulfilment of its mandate, there are several schemes and programs that are run by the National Trust, especially the Niramaya Group Insurance scheme, from the income derived from the Rs. 100 crore corpus that the NT has. Over the years, the NT has been starved of funds. In all likelihood, it is apprehended, these schemes would be abandoned given the fact that the proposal has emanated from the Department of Expenditure, Ministry of Finance, in the name of “austerity”.

The government would be better advised not to move forward to amend, least of all repeal, any law that concerns persons with disabilities without proper consultations and taking their concerns into account. It seems not to have learnt lessons from the experience of being forced to withdraw proposed amendments to the RPD Act, in the face of stiff opposition, not too long back.