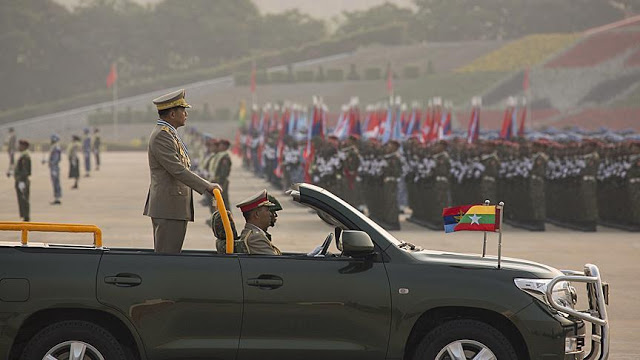 By Shamsul Islam*
If a shameful act means an action which is criminal and nauseating, it would be an understatement to describe the attitude of the present RSS-BJP rulers of India towards the demolition of democracy and large-scale killing of the people of Myanmar by the military (tatmadaw) junta which took power through a coup on February 1, 2021 after renegading the election results in which the party of Aung San Suu Kyi, National League for Democracy, was a clear winner.
The ruthless rule by the military in Myanmar (formerly Burma) is not a new phenomenon. Last time it lasted almost for five decades, from 1962 to 2011, and now has resumed in 2021.
According to the latest tally by the renowned nonprofit Assistance Association for Political Prisoners, at least 500 people, mostly young, have been killed in Myanmar since the military coup on February 1. At least six children between the ages of 10 and 16 were among those killed on Saturday, Myanmar’s Armed Forces Day. So far more than 43 children have been killed by the military firing squads.
How military rulers were killings with impunity was made clear by a joint statement of Alice Wairimu Nderitu, UN Special Adviser on the Prevention of Genocide, and Michelle Bachelet, UN High Commissioner for Human Rights which demanded that the Myanmar military must “immediately stop killing the very people it has the duty to serve and protect.” The UN Special Rapporteur for Myanmar said the army was carrying out “mass murder” and called on the world to isolate the junta and halt its access to weapons.

A number of human rights activists and political analysts have reasons to claim that RSS-BJP rulers of India are not doing even minimum to stop the mass slaughter of the Myanmarese. It seems to be the continuation of the support which was offered during the genocide of the Rohingyas earlier.

According to a leading English daily of India, two months after the coup India joined Russia, Bangladesh, Vietnam, Laos, Thailand and the two sworn enemies, China and Pakistan in sending a high-level military delegation to participate in the celebration of the ‘Tatmadaw Day’ (Military Day) on March 27, 2021. It is the most prominent state function of Myanmar.

India joined the celebration exactly on the day which witnessed maximum killings of the common people, most of them youth, since the coup. It is not that the Indian government did not know about the critical situation in Myanmar. A day before the annual parade in which the Indian military delegation joined the celebration, military chiefs of USA, Australia, Canada, Germany, Greece, Italy, Japan, the Kingdom of Denmark, the Kingdom of the Netherlands, New Zealand, the Republic of Korea and the United Kingdom had released a statement which read:

“As Chiefs of Defence, we condemn the use of lethal force against unarmed people by the Myanmar Armed Forces and associated security services…a professional military follows international standards for conduct and is responsible for protecting — not harming — the people it serves”.

The presence of Indian military delegation at the killer Myanmar army’s annual day was not sudden or unexpected. India under Prime Minister Narendra Modi developed a close relationship with the Myanmar military. In October 2020, Army Chief General MM Naravane and Foreign Secretary Harsh Shringla had visited the country to enhance bilateral ties. They had met not only the country’s then state counsellor, Aung San Suu Kyi but also the military leadership.
In fact, the Indian Army chief, speaking at a seminar in February, had spoken about the proximity of the military of the two countries resulting in growing cooperation and “synergy between the soldiers on ground with reasonable operational dividends”.
It is true that the Indian government released press notes on Myanmar. On February 1, stating:

“We have noted the developments in Myanmar with deep concern. India has always been steadfast in its support to the process of democratic transition in Myanmar. We believe that the rule of law and the democratic process must be upheld. We are monitoring the situation closely.”

It took more than a month for India to come out with the second statement. On April 2, Ministry of External Affairs spokesperson Arindam Bagchi at a media briefing stated: “Let me be very clear, we condemn any use of violence…We believe that the rule of law should prevail. We stand for the restoration of democracy in Myanmar.” He also demanded release of political prisoners.
The Indian Army chief, speaking at a seminar in February, had spoken about the proximity of the military of the two countriesWhen asked whether India would allow people from Myanmar to cross over through the border between the two countries, he said India was dealing the matter “as per laws and humanitarian considerations”.There was no call to stop immediately mass killings and burning of villages and localities of the protestors. The foreign ministry spokesperson indulged in jugglery of words. Shocked by the brazen denial to the persecuted Myanmarese to take refuge in India, leading academician Pratap Bhanu Mehta wrote:

“By sidelining even the most basic humanitarian impulses in its response to Myanmar crisis, India will neither realise its ideals nor its strategic objectives. The Chief Minister of Mizoram, Zoramthanga, was correct in writing to the Centre that India cannot ignore the humanitarian crisis unfolding in our backyard, and remain ‘indifferent’ to the suffering of those crossing the border. The Manipur government has, thankfully, withdrawn a shameful circular that would have prohibited providing meaningful assistance to victims of political persecution.

“This circular, if enacted, would have been terrible for India’s image. But how we deal with the victims of this crisis should not be just driven by an exercise in image management, but take the larger humanitarian and political view. The humanitarian case for providing some kind of safe haven for refugees is too obvious to be stated. Surely the real test of ‘Vasudhaiva Kutumbakam’ is not opportunistic displays of noblesse oblige, it is adherence to basic norms of decency…”

The RSS-BJP rulers who miss no opportunity to declare their love for the dictum ‘world is a family’ have refused entry to mass of Christians, indigenous tribes (who worship tribal gods/goddesses) and some Buddhist refugees forced to leave Myanmar due to military repression. The Government of India ensured the Indian police and army manning the Myanmar borders thwart any attempt by the refugees to seek shelter in India. It was heartening to note that Mizoram chief minister refused to oblige.
Importantly, the persecution in Myanmar exposes the huge chinks in the much-hyped Citizenship Amendment Act 2019 which gave right to Indian citizenship to persecuted non-Muslim minorities in the neighbouring Muslim countries. It, shockingly, betrayed persecuted Tamilians in Sri Lanka and now India would not come to the rescue of non-Muslim minorities in Myanmar.

Mussolini and Hitler alone have not been favourites of the RSS ideologues. In fact, diverse totalitarian ideologies and regimes of the 20th century have been their favourite. One of the most ruthless ruling gang, the junta which is ruling Myanmar today, has always been their darling. According to a report in the official organ of the RSS, “Organiser” (February 28-March 5, 2000), filed by its own correspondent in Burma:

This report appeared with three photographs. In one photograph five military Generals, including the second in command of the military junta, Lt Gen Tin Oo, are seen standing on the stage in the midst of SDSS leadership wearing khaki shorts (the RSS attire, which is changed to brown trousers now). In the other photograph, leading lights of the Burmese military junta were seen sitting in the front row of the auditorium.

The Vishwa Hindu Parishad website describes Sanatan Dharma Swayamsevak Sangh as its main Hindu organization in Myanmar. The other being Central Hindu Board.
With these old links with the Myanmar military rulers the inimical attitude of the RSS-BJP Indian rulers towards the persecuted Rohingyas in Myanmar was neither accidental nor sudden. The Indian government led by Modi falling in line with the Myanmar rulers refused to admit that genocide of the Rohingyas is taking place. Thousands of persecuted Rohingyas who escaped to India to save themselves from genocide are being forced to leave India.

#India - Suicide and Malnutrition among weavers in Varanasi #healthcare
Urgent call to the International Olympic Committee (IOC) in solidarity with Istanbul
A year after NHRC ruling, patients await state compensation in Maharashtra
Did Vedanta PR Firm access NGT order before publication : How deep is the Rot ? #mustshare