Ruskin Bond – A writer at work 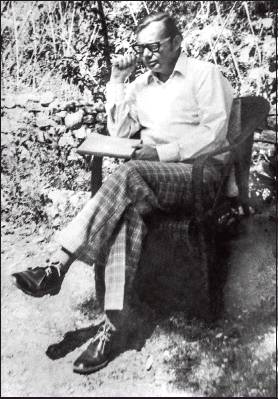 In his just released memoir, Ruskin Bond reminisces about the time he decided to have a writing room of his own

A natural writer, one born with the gift, should be able to write anywhere — in a city slum, or a dingy attic room, or a noisy railway station, or the deck of a rolling ship — but it certainly helps to have a room of one’s own, a private corner, with a desk for one’s papers, a bed or settee on which to lie or dream, and a window to enable one to look upon the world from time to time.

The world outside is just as important as the world inside, and the two in harmony bring out the best in a writer’s creative spirit.

My first real writing room was that tiny room on the roof, a barsati on top of a rambling old building in Dehradun, which had once been the Gresham Hotel and later the Station Canteen and was now occupied by various tenants, among them my mother and stepfather and my three small brothers and sister, not forgetting an Alsatian and a dachshund.

I’d come down from school, having just given my final school-leaving exams (called the Senior Cambridge in those days), and I had several idle months before me. It was intended that I should go to England by the end of the year. I was going to be a writer, I knew that, of course (I had all the overconfidence of a sixteen-year-old), so why not make a start? And why not be professional about it?

There was an old Remington typewriter in my stepfather’s automobile showroom, and nobody seemed to be using it, so I brought it home, or rather carried it up to the barsati, which was at my disposal.

This barsati became my citadel; I slept in it, wrote in it, even entertained my few friends in it. It opened on to the roof, and sometimes I was visited by crows and mynas and bats and cats, but they didn’t stop me from pounding out little stories and articles on that typewriter and sending them off to magazines throughout the country. Most of them came back to me with editorial regrets. Fair enough. It was juvenile stuff.

Still, some of it went into a little pocket-sized magazine called My Magazine of India, published from Madras (now Chennai). They sent me a five-rupee money order for each story published. Well, with five rupees I could see three films, or buy two paperbacks, or treat myself to a bottle of beer, so it wasn’t to be scoffed at.

And then I sold a story to The Illustrated Weekly of India, the country’s premier English magazine, edited by CR Mandy. It was a trifle, a school story or skit called My Calling, but it brought me fifty rupees, a princely fee in those far-off days (August 1951). I gave a party for my friends — Somi, Chottu, Haripal, Kishen, Ranbir and Co. — and declared myself to be a fully established writer, although it would be several months before I sold another story.

At the same time, I was keeping a journal, an almost daily account of my activities and excursions with the abovementioned friends; this I was writing by hand, using school exercise books for the purpose. My friends went into it — Somi, a Sikh boy of 14, and his brothers; Kishen, who lived in the same building with his beautiful mother and alcoholic father; Ranbir, another next-door boy; and various other friends, neighbours and families. I had not intended that this journal should become a book, but I felt it was important for a writer to keep a journal — and I had already read Somerset Maugham’s A Writer’s Notebook, Sterne’s Sentimental Journey, and the diaries of Samuel Pepys, so I knew the importance of a journal or diary from a literary point of view, but I also wanted to keep one in order to preserve the memory of my friends. I knew I would be going away soon and might never see them again.

And that, of course, is what happened. The train took me to Bombay (now Mumbai)…; a ship took me to England and the Channel Islands. And there, on the island of Jersey, at my aunt’s house, I found myself in another attic room, with another borrowed typewriter, making a tremendous effort to get published while working by day, at first in a grocery store and then in the office of the Public Health Department.

And how I missed India and my friends and the hills and forests around Dehra, where I had found love and companionship. But of course, I had those diaries with me.

I gave up my job in Jersey — a secure government job — and went to London, the mecca for all aspiring writers.

There were many rooms in London — somehow I was never long in one place — and only one of them had a window, which looked out upon a small cemetery. I did not mind the cemetery. I had, after all, grown up on the stories of MR James and Walter de la Mare. But the landlady did not allow visitors, and I had student friends from India, Vietnam and Thailand, and did not want to discourage them from coming to see me. So I moved to Belsize Avenue, where there was an absentee landlord. I made friends with some West Indians — Jamaicans, who loved to sing and dance and drink buckets of rum — but as I wasn’t doing much writing there I moved again, to Haverstock Hill, where a kind Jewish landlady gave me breakfast along with the room, and there I finished my novel which I called The Room on the Roof, after my barsati in Dehradun.

This third and final draft had been written at night, after my return from the office where I was working as an accounts clerk.

I had friends now, but I still missed India. I missed the fragrance, the smells, the colours. I missed the texture of the earth, the soil and its various shades. I missed its smell after the rain. I missed the grass coming up, and the crested hoopoe on the lawn, leisurely snapping up insects. I missed the early-morning grass, drenched with dew, as I trod upon it. I missed the scent of jasmine, the fragrance of mango blossoms, of neem pods bursting underfoot, of cow-dung smoke, buffaloes slumbering in village ponds, boys chewing sugar cane, farmers tilling their fields with long wooden ploughs, girls with lips stained with jamun juice, steam engines shunting, railway platforms, railway bookstalls with timetables and astrological magazines, aloo-puri on leaf platters, the sun going down, babblers making a racket in the banyan tree, twilight and dusk and the jackals howling in the night, the sun coming up, parrots flashing by as if by magic, an inquiring squirrel pausing on my windowsill… All this and more I remember and long for . . .

And what do I do about it?

I go down to Kew Gardens, south of London, and bask in the tropical warmth of the huge hothouses in which they grow plants and shrubs from Asia and Africa. I can be practical at times.

And what did I like about London? The theatres and the specialist cinemas — the Everyman in Hampstead, where I saw old films, and the Academy in Leicester Square, where I saw French and continental films. And Foyles Bookshop, where I could browse and pick up unusual books. But none of this was home.

And so, when finally I received a £50 advance for my novel, I bought a passage on the MS Batory, a cheap Polish liner (£40 for the voyage), and sailed for Bombay.

The Beauty of All My Days: A Memoir

by Ruskin Bond, published by Penguin

Ruskin Bond working on his Olympia portable typewriter, which he had bought in 1964. He still uses the machine to file his tax returns