What Indian farmers really need: A total overhaul of fundamental economics of agriculture

Generate Enquiries for your Business by Listing on Economictimes.com

The mother gives milk only when the child cries. The child is now crying hard,” says Shiv Kumar Sharma, better known as Kakkaji, who shot to national fame as the man leading the farmer protests in Madhya Pradesh.

If six farmers died in police firing during protests in Mandsaur a week ago, 10 had committed suicide at last count, at least two of them in Madhya Pradesh Chief Minister Shivraj Singh Chouhan’s home district of Vidisha.

“Everyone knows why the kisan is unhappy. The government knows it better than anyone else,” Kakkaji, who heads the Rashtriya Kisan Mazdoor Sangh, told ET Magazine from Bhopal. “The farmer has reached the brink of despair. We have just two options now: andolan (agitation) or suicide.”

Grim Reapers
Kakkaji is not the only farmer leader saying this. A battalion of farmers from Tamil Nadu turned April into a violently angry month at Delhi’s Jantar Mantar as they brandished the skulls of those who had committed suicide, shaved their heads, walked around naked and even drank urine, demanding attention to their severe debt problems.

The Tamil Nadu farmers, who protested for 41 days, had barely gone back after an assurance of a drought relief package worth Rs 40,000 crore from their chief minister, E Palaniswami, when things started spiralling out of control in Maharashtra. Farmers, emboldened by the decision of the Uttar Pradesh government to waive loans worth Rs 36,000 crore, demanded a waiver in their state as well. Vegetables and milk supplies to Mumbai were cut off by agitators, and the Devendra Fadnavis government had to give in by assuring that their demands would be met.

“Right from the time India got freedom, the farmer has been exploited, harassed and punished. They all have debts and are not able to repay them. The agitation is currently on in 11 states, it will spread to all 29 states in the country,” says Kakkaji. 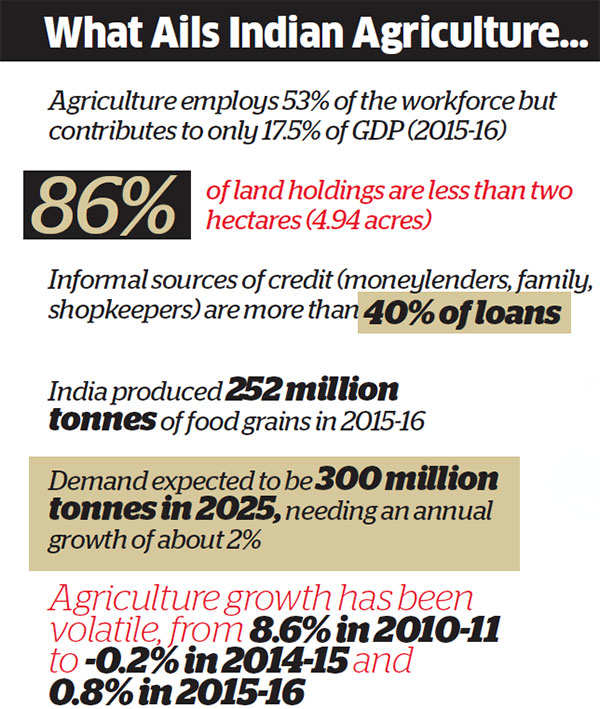 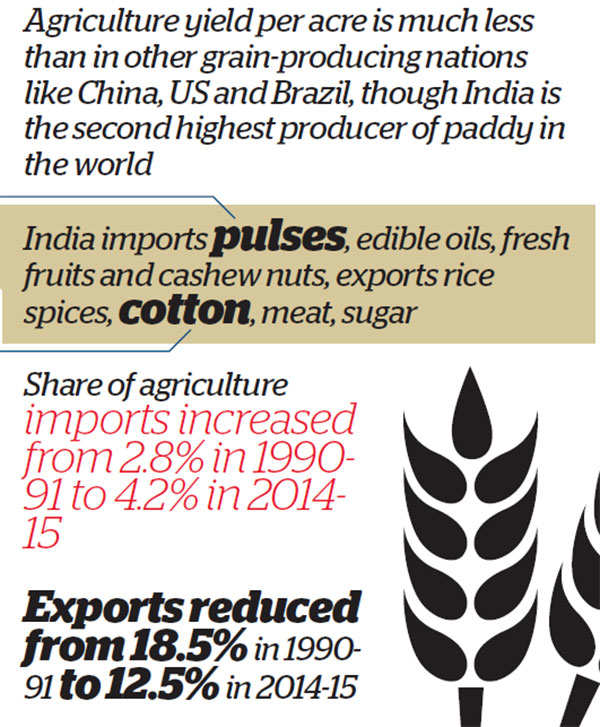 Mohini Mohan Mishra, secretary of the Bharatiya Kisan Sangh, a body affiliated to the Rashtriya Swayamsevak Sangh (RSS), is inclined to agree with this assessment. However, he disputes that loan waiver is the answer to the problem. “All farmers are not asking for that, though I admit some are. The UPA gave a loan waiver, So did VP Singh. Real farmers know this is vote-bank politics, a lollipop that will not pull them out of debt,” he contends.

About 15-20% beneficiaries of such waivers are fake, says Mishra. And 25-30% of genuine victims are left out. “What we need is not waiver but a reduction in input costs and good returns on the crop,” he says.

Draw a Roadmap
Mishra has a multi-pronged programme that he wants Prime Minister Narendra Modi to implement. The prongs include: one, give all input subsidies, including those on fertilisers, farm implements and seeds, as direct benefit transfer to farmers’ accounts rather than to companies.

Two, put a limit on the prices that intermediaries can charge, reducing the huge gap between farm prices and consumer prices. Three, give interest-free loans to farmers, like in Madhya Pradesh and Karnataka, and charge them interest only if they get to sell their crop and still don’t repay the loan. Four, give local farmers a place in budget discussions and planning.

Five, convert at least 15 of the 70-odd agriculture universities in India to organic ones that will work on reducing input costs and improving yield. And, six, make and implement strong laws to punish violators of agriculture contracts, like sugarcane factories or tomato contractors that don’t pay up their dues.

“The PM should call a special session of Parliament to discuss the agrarian crisis. There should be no politicking and blame game. The political class should seriously future of agriculture. We will also participate and assist them,” says Mishra. “If this is not done, we have no option but to hit the streets.”

Social scientist Narendar Pani, who teaches at Bengaluru’s National Institute of Advanced Studies, however, points out that this year’s situation is vastly different from the usual issue of drought and distress. “The problem we are facing this year is overproduction of agricultural commodities, resulting in crashing prices,” he says.

Farmer associations are demanding the implementation of distress formula proposed by agriculture scientist MS Swaminathan and the National Commission on Farmers: minimum support price (MSP) that is the cost of production plus 50%. Kakkaji even wants adjustment for inflation. “This will not work,” says Pani, “as it will price the produce beyond international rates and close even the export market.”

Pani explains that the situation is created as each farmer opts for crops based on prices at the time of sowing. “This results in all farmers going for one crop that is priced high at that point. It leads to overproduction, a price crash and huge losses to farmers. This used to be called the sugar cycle of glut and shortage, but now it affects every second commodity,” he adds.

New Models
Intervention through MSP or loan waivers, he feels, has limited impact and doesn’t solve the actual problem. “If all states go for waivers, it will cost an estimated Rs 2,70,000 crore, which means investment in other areas will drop. Loan waivers also discriminate between farmers who have paid their loans and those who cannot take loans,” he says.

“What we need to do is reduce input costs and find a way to predict prices of commodities for the farmers.” The model that Pani suggests is decentralised futures markets by agri-entrepreneurs. “They predict a price and if the farmer is willing to sell his produce at that price, he will grow that crop. If the prices fall below that rate, the farmer should get the price quoted; if the prices are higher, the entrepreneur gets the profit,” he says.

Several such models are in place across India, particularly under the UPA-initiated Integrated Agriculture Development and Integrated Horticulture Development public-private-partnership schemes, which the NDA has also aggressively supported. These schemes, however, are far too few to support the estimated 11.87 crore farmers and 14.4 crore agricultural labourers, as reported in Census 2011.

Individual agri-entrepreneurs like techie-turned farmer SC Madhuchandan, who is working with a farmers’ cooperative in Mandya district in Karnataka, offer solutions. “Forty years ago, farming families were not poverty-stricken. They grew all the food that they ate, and made in their homes all the inputs needed for crops in their fields,” says Madhuchandan.

“They had seven to eight children, but there was sufficient money for all their needs. Each house even had its own tijori (strong box).”

The causes that Madhuchandan identifies for farmers’ poverty are similar to what most agriculture experts and economists state: fragmented land holdings, high input prices, non-remunerative prices for crop and spiralling debt traps. His solution, however, is to go back to the basics. “My farmer friend Mahadev spent just Rs 750 an acre for his paddy crop. He has earned Rs 50,000 an acre from it. Next year, he won’t spend even that much as he is harvesting his own seeds, like our ancestors did. All his fertilisers are home-grown and organic. He has naati (local) cows and uses their dung for the crops, in the traditional style.”

Madhuchandan says that PM Modi’s plan of doubling farm incomes will not work unless this kind of a self-sustaining model is adopted for farming. He also advocates growing pesticide-free vegetables in kitchen gardens, ensuring better health and bringing down expenses. He has set up women’s groups in 120 villages in Mandya, all of whom are growing and eating their own organic vegetables, and selling the surplus for better prices in markets.

“Agriculture is still giving the same returns as earlier. But farmers send their children to private, English-medium schools and spend about Rs 5,000 a month on education. Each family spends about Rs 20,000 a year on medicines and health problems. How can agriculture, with increasing input costs, sustain this level of expenditure?” asks Madhuchandan.

His simplicity model and back-to-basics approach have sceptics and will have to be demonstrated on a larger scale before the fertiliser-higher yield models are given up by the farming community at large.

Government policies at both the state and Central levels are still tied up in subsidies, waivers and MSP models. A beacon of hope has been the integrated emarket that Karnataka has set up which, according to a NITI Aayog report, has given farmers a 38% increase in prices. The Centre, putting politics aside, has opted to replicate this nationally, and farmer organisations are looking to it as a means to better returns.

There are, however, no quick-fix solutions to the ongoing agrarian crisis. Pani feels even an integrated market can only ensure standardisation of prices across the country and not yield higher returns. “If there is a shortage in a commodity that could lead to price rise and better returns for the farmers, that would be countered in the integrated e-market because people will opt to bu y at lower prices elsewhere. The result is the farmer will only get the lower price for his produce, whether there is a glut or a shortfall,” he explains.

There has been some analysis by economists that the November 8, 2016, demonetisation has contributed to the spiralling agrarian crisis. Pani says the impact is due to the shortage of currency notes as the Centre has not fully remonetised the economy. Mishra says while demonetisation, in itself, did not impact the farming community, the enforced digitalisation without sufficient infrastructure, like banks and ATMs, in rural areas caused serious problems.

A Way Forward
A Bengaluru-based company called Pace Wisdom, along with UK company Sat Sure, is carrying out a pilot project in Andhra Pradesh’s Srikakulam district at the behest of Chief Minister N Chandrababu Naidu to apply technology to help farmers and the government predict actual crop production, soil fertility and soil nutrient requirements. The company is also in touch with the Gujarat government to try out a similar experiment there.

Pace Wisdom director Bharath Jatangi told ET Magazine:
“Imagine if the government can predict the exact tonnes of production of all crops, tell farmers about fertile and nonfertile lands and insure accordingly so that there would be zero crop loss? We are able to do that by using algorithms that combine satellite imagery with weather and location data and correlate the outputs with economic datasets.”

The algorithm helps farmers with details on what to sow, the soil condition, approximate yield in quintals or tonnes. It also helps them understand futures market better and monitor soil nutrients throughout the day and get correct insurance, Jatangi added.