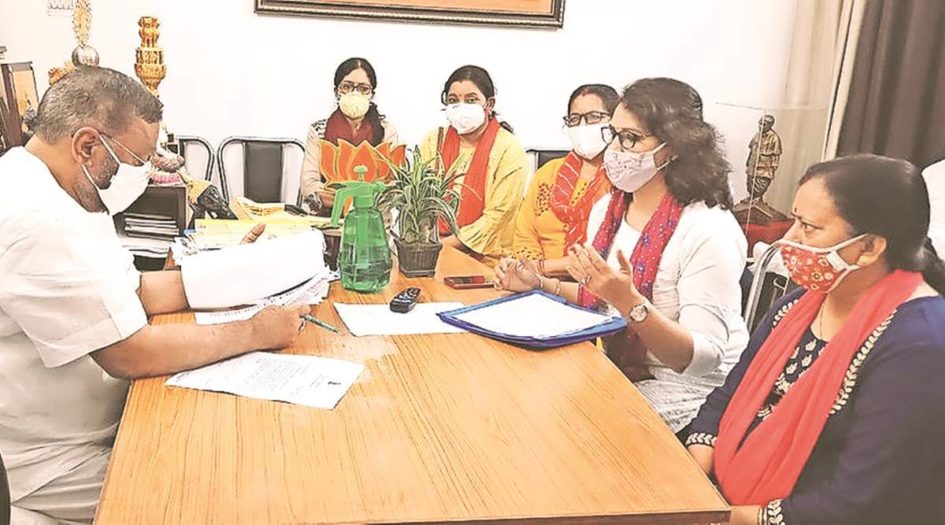 Teachers at a meeting with UP Labour Minister Swami Prasad Maurya. (Express)

The association, which was formed around six months ago, already has a presence in 50 of the state’s 75 districts.

A newly formed association of women teachers in UP has launched a campaign seeking three-day ‘period leave’ every month, given the poor condition of toilets in government schools across the state.

As part of the campaign, led by women teachers of Uttar Pradesh Basic Education Department, members of the Uttar Pradesh Mahila Shikshak Sangh have met ministers of the state government and are now reaching out to public representatives, telling them why they should be heard.

The association, which was formed around six months ago, already has a presence in 50 of the state’s 75 districts.

Talking about the campaign, association president Sulochana Maurya says, “In most schools, teachers share the toilet with over 200 to 400 students. There’s hardly any cleaning that happens. In fact, a lot of women teachers tend to suffer from urinary infections because they don’t drink water to avoid using the washroom. Often, the choice is between using the unhygienic washrooms in schools or going to the fields. It’s difficult, especially when we have our periods, because some of us have to travel 30-40 km to reach schools in far-flung villages.”

On the need to form an association, Maurya, who is the headteacher of a primary school in Barabanki district, says, “Over 60 to 70 per cent of primary school teachers are women. While we may be given token posts in teacher associations, these are usually dominated by men and they don’t take up these issues (of menstrual leave). But for us women, this is a major concern.”

Speaking to The Indian Express, Ruchi Saini, who teaches in a primary school in Bareilly and who is now head of the association’s district division, says that while the situation of toilets has improved a lot ever since the state government launched the ‘Kaya-Kalpa’ project earlier this year to give government schools a makeover, with most schools having separate toilets for girls and boys, the toilets are mostly dirty from overuse and are rarely cleaned.

Saini says that apart from social media campaigns, they have started placing their demand before public representatives.

“After the success of our social media campaign, which saw several male teachers supporting us, especially those whose wives face similar problems, we have now started meeting political leaders to seek their support. We have already submitted a representation to Uttar Pradesh Basic Education Minister Satish Dwivedi and other ministers, including Swami Prasad Maurya and Deputy Chief Minister Keshav Prasad Maurya. Next, we will approach MLAs of our regions and ask them to speak up for us. We haven’t been able to meet the CM yet, but we have submitted a memorandum by post.”

Saini adds that while menstrual leave is among the first few campaigns that the association has launched, they will soon take up issues related to the security of women teachers as they have to travel long distances to reach rural schools.