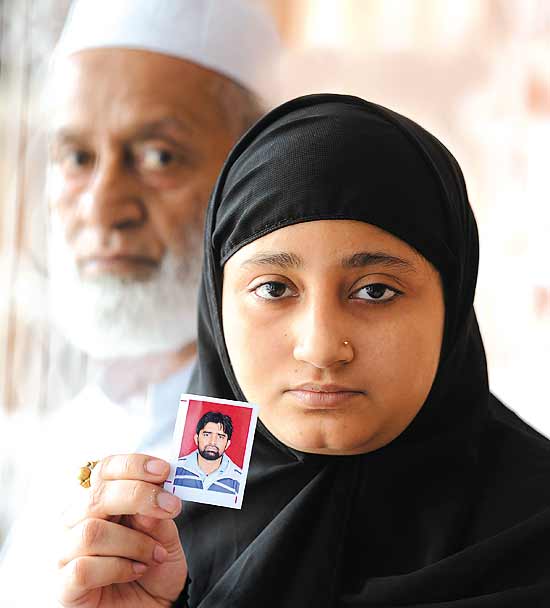 Tribhuvan Tiwari
“I’ve knocked at the doors of every agency, ministry… MHA, MEA, NIA, CBI, ATS asking about Fasih’s whereabouts. None of them have an answer.” Nikhat Parween, Fasih’s wifeFasih Mehmood, 29
terror in darbhanga
Only A Bad Name Lives In Barh Samaila
A village in Darbhanga, Bihar, is haunted by the ‘terror’ tag
Panini Anand

It’s the village no one speaks of. When asked the way to Barh Samaila, the old lady doesn’t utter a word, simply points to the north, a clear discomfort in her face at the mere mention of the place. The workers toiling in the neighbouring fields too refuse to talk about the place to strangers.

So what is the curse of Barh Samaila village in Darbhanga, north Bihar? Well, it’s the latest “terror village” in India. As happened with Azamgarh in Uttar Pradesh, Bhatkal in Karnataka and Malwa in Madhya Pradesh, the terror tag has come to drag down the name of the village and its residents. 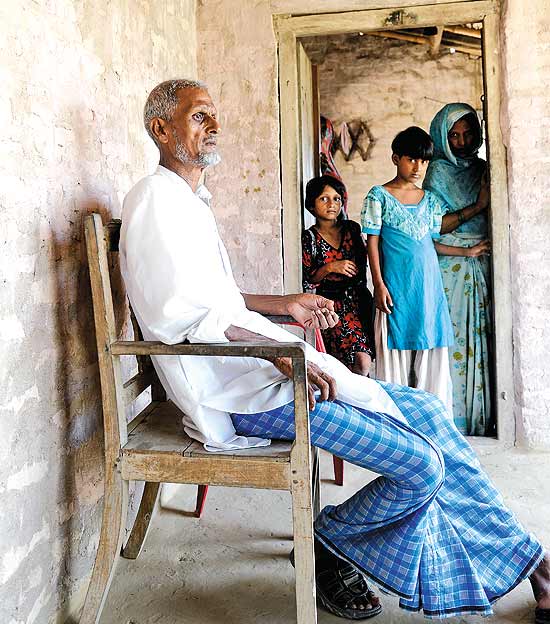 “When we got his body, his fingers and nails were crushed and his forehead bore marks of electric shock.” Zafeer Siddiqui, Qateel’s father

Barh Samaila has acquired the label as five Muslim men have been arrested from here over the past year on charges of being involved in terror plots. Kafeel Akhtar, 26, was arrested by the Karnataka-Andhra police on May 6 last year; Qateel Siddiqui, 27, on November 19 last year (he died in custody in Pune’s Yerwada jail on June 8); Gauhar Aziz Khomaini, 31, picked up by the Delhi police on November 23, 2011; Fasih Mehmood, 29, arrested in Saudi Arabia by Saudi and Indian sleuths on May 13 last; and Abu Muskat Akhfal, 23, who was detained on June 2 by the Mumbai ATS. The most famous “Darbhanga terrorist” is of course Fasih, on the verge of being delivered to Indian agencies by the Saudis. Union home minister P. Chidambaram has already declared so, and presumably he’s been fully briefed about this new terror zone in the nation.

In Barh Samaila, though, there is only fear and anger. None of the five men had criminal records in the local thana, so one can’t blame the residents if they believe that their boys are innocent and that their village is just the latest hunting ground for our anti-terror agencies.

They might have a case. For these men from a tiny village in Darbhanga are being linked to even minor blasts from 2010 in places as far away as Bangalore’s Chinnaswamy Stadium and Delhi’s Jama Masjid. If the police narrative is to be believed, this nondescript village is where a number of sinister plots were hatched. A four-hour drive from Patna and 15 km from town, Barh Samaila is now a preferred destination of police, ATS and intelligence agencies from across the country. The fear is such that today the village barely has any young men left. They have all mostly fled fearing for their lives. The only people left are the children, women and the old. The streets of the Muslim quarters are empty and there are no jokes to be cracked at the chai shops. Every outsider is looked at with suspicion, questioned about their visit and motives. The few young men remaining refuse to divulge their names or talk openly.

“Welcome to the home of the Indian Mujahideen”—that’s how Zafeer Siddiqui, the dead Qateel’s father greets us, pointing to the inside of his house with its unplastered brick walls, mud floors and windows without grills. “My son was our family’s only hope out of poverty. After seven months of continuous torture, they got nothing, So they killed him,” he says. Qateel was arrested on suspicions of being an IM member and of involvement in the Chinnaswamy stadium and Jama Masjid attacks in 2010. He died in custody, even before his case came up in court. Strangely, on June 6, father Zafeer had got a call that his son would be released in 2-3 days. Two days later, the family got to know through TV that their son had died in custody. No one from the administration, the ATS, the local police, or the Maharashtra and Bihar governments cared to inform them. His mother Gulshan Ara, half-hidden and weeping behind the door, asks, “Can you bring back my son? Please bring him back.” Father Zafeer can’t hold back his anger, “Look at our starving family, the girls waiting to be married, Qateel’s pregnant wife. Do we look like terrorists? It’s as if we are lepers now, condemned to live in fear.” 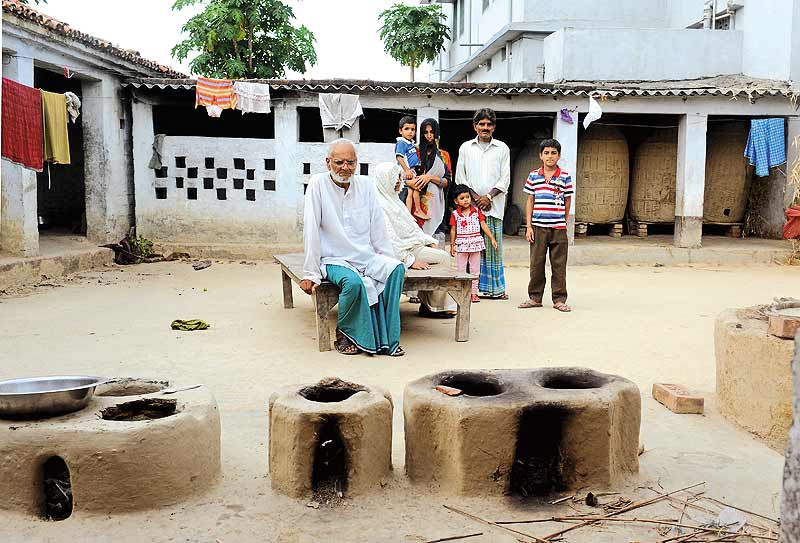 “They say he was involved in some blasts in south India; my son has never been out of Darbhanga.” Abdussalaam, Kafeel’s father

Of the 2,000-odd families in Barh Samaila, around 600 are Muslim. Farming is the mainstay here and the village is well-known for its mango orchards. But many of the young have begun migrating outside for jobs, contributing to the village’s modest prosperity in pockets. In fact, before the terror taint, the village was known for its share of engineers and government officials. There is an interesting similarity here with Sanjarpur, the village in Uttar Pradesh’s Azamgarh district that was also labelled a “terror village” after the Batla House encounter in 2008 (the boys killed in the Delhi encounter were from there). Both in Sanjarpur and Barh Samaila, the level of education among the Muslims is high.

Firoz Ahmad, Fasih Mehmood’s father, is a doctor. He has a heart problem and has been pacing the floors since he heard about his son’s arrest in Saudi Arabia. “My father was a freedom fighter and a member of the Congress party but we are being treated like orphans now. Not one political party is willing to take on the tyranny of the anti-terror squads (ATS). They want to make Darbhanga into another Azamgarh and the media too is helping them along. Please stop it,” he pleads. Fasih’s wife Nikhat Parween, currently in Patna busy fighting a long-drawn battle for his release, adds, “I always believed the media stories earlier of terrorists…but after my husband’s case, I have been studying many past ones. In most of them, the case was found baseless, the accused acquitted.”

Not far from Fasih’s place is Kafeel Akhtar’s house. He was arrested on May 6 last year by a joint operation by the Karnataka and Andhra police and is currently lodged in Bangalore Central Jail. Abdussalaam, Kafeel’s father, says, “After picking him up, they allowed us to speak to him on phone often. My son asked us not to protest or demonstrate against the arrest because he was going to be released soon as they had not found anything against him. Even a police official told me that he was going to be released soon but we are still waiting.”

The few youth Outlook talked to in the village admitted that police from different states had questioned them. One of them, on condition of anonymity, says, “There are many more like us who have been questioned but we are scared to admit it publicly. Akhfal’s case is only the latest to come out in the open.” Abu Muskat Akhfal was taken in for questioning by the Maharashtra ATS and then tortured to force a ‘confession’. He was finally released when he refused to give in. His father, Abul Warqaat, a 68-year-old retired teacher, can’t hold back his tears: “During the interrogation, he was given electric shocks in his private parts and forehead. He didn’t want to tell us but we saw the torture marks on his body.” 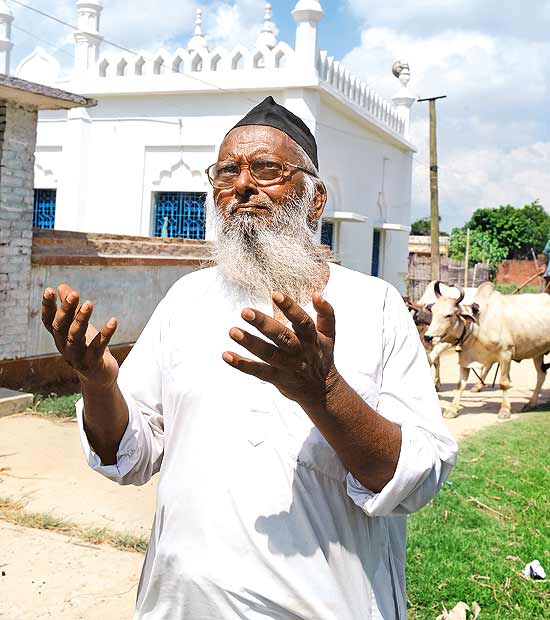 “He was picked up for questioning in the day and sent home at night. He got electric shocks on his forehead and genitals.” Abul Warqaat, Abu’s father

So what are the interrogators looking for? Some admit they are asked questions about neighbours, about those who have been arrested, about Yasin Bhatkal whom the agencies describe as the Indian Mujahideen mastermind and some “faltu” questions. Some of the boys still can’t get over the humiliation. One of the youngsters even blamed the media for their fate: “The media has made our condition worse and the ATS does not leave us in peace. They have spoiled our lives, our careers. We are isolated in our own society.” Mohammed Bariq, an old man from the village, asks, “Who will marry our girls now? What have you done to our reputation and tradition? This land once belonged to the writer Mazhar Imam, Sahitya Academy award winner from Darbhanga, and the progressive poet Baba Nagarjuna.”

Munidhar Jha, a retired government official from nearby village Vijay is a bit more circumspect. He says one can’t rule out terror group activities in the otherwise peaceful region of Mithilanchal because it is a border region and could have been used as a hideout. But as he puts it, “The victimisation of an entire area or community is wrong and unfair. Terrorist yahaan paida nahi ho rahe hein, ho sakta hai ki panaah le rahe hon (Terrorists are not born here, though some may have sought refuge in this region)”. The stereotyping has even impacted Muslim youngsters in Darbhanga town. One of them who has never even been to Barh Samaila says, “If we go to Bangalore or Delhi today for studies or jobs, we are going to be left out. Darbhanga has become a curse for us.”

The recent arrests in Darbhanga may also have wider repercussions in Bihar politics as Muslims begin questioning the ‘secular’ credentials of CM Nitish Kumar. The problem has become acute with recent incidents in Araria district in northern Bihar. Two Muslim women were raped in Batraha there by Sashastra Seema Bal (SSB) personnel in November 2010. When locals went to complain at the local SSB office, they were fired upon and two men died. In another incident, four people were killed when the local police fired upon protesters of an industrial unit that had blocked the main entry into their village in Forbesganj in Araria. Patna-based political analyst Arshad Ajmal says, “Not only is the Bihar police targeting their own people, they are unable to stop or intervene when the ATS or police of other states come to pick up people here.” Nitish has written a letter to the Karnataka government expressing his “displeasure” that their state police made arrests in Bihar without informing them. But Nikhat Parween, a burqa-clad woman who is putting up a spirited fight for her husband, says these are mere crocodile tears. “The first time the CM said he was unhappy, the next time he was sad. Now it seems we are soon going to see some tears in his eyes.”

How the Indian media reported on rape in January 2014 #Vaw
How the "Pro-Life" Movement Puts Women Behind Bars
Dalit woman accuses police of taking bribe
Is Just garlanding of portraits is honoring Ambedkar?