The rise and fall of nuclear power, in 6 charts

Nuclear power is slowly going out of style. Back in 1996, atomic energy supplied 17.6 percent of the world’s electricity. Today that’s down to just 10.8 percent — and it could drop even further in the years ahead.

That’s according to the World Nuclear Industry Status Report 2014, which charts the rise and fall of nuclear power over time.

The upshot is that significantly fewer nuclear reactors are in operation today than was the case in 2010 — in large part due to the shutdown of 48 reactors in Japan after the Fukushima disaster. On the flip side, only China currently has plans to massively ramp up reactor construction. And new reactors in many countries, from Finland to Vietnam, are falling victim to delays and cost overruns.

That’s not encouraging news for efforts to tackle global warming. The proportion of energy that the world gets from carbon-free sources has stagnated since 1999 — in part because of the nuclear industry’s struggles. And the Intergovernmental Panel on Climate Change has warned that reducing emissions will be significantly more expensive if nuclear power’s not available.

Here are six key charts from the report:

1) Nuclear energy production has been falling since 2005 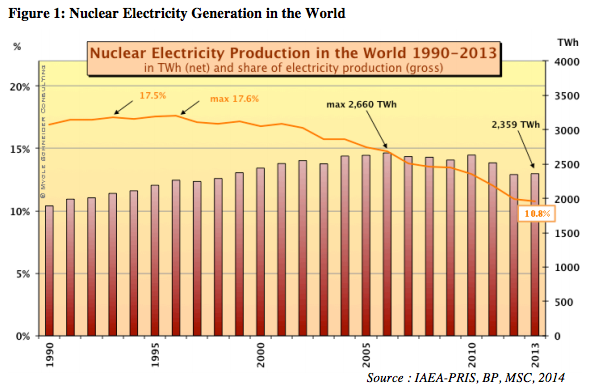 Nuclear electricity generation kept rising during the 1990s until it hit a peak of 2,660 terrawatt-hours in 2005. But then it started falling — and generated just 2,359 Twh of electricity in 2013.

What’s more, nuclear power has been eclipsed by other energy sources — particularly coal and natural gas. Back in 1996, nuclear power provided 17.6 percent of the world’s electricity. Today, that’s down to around 10.8 percent. 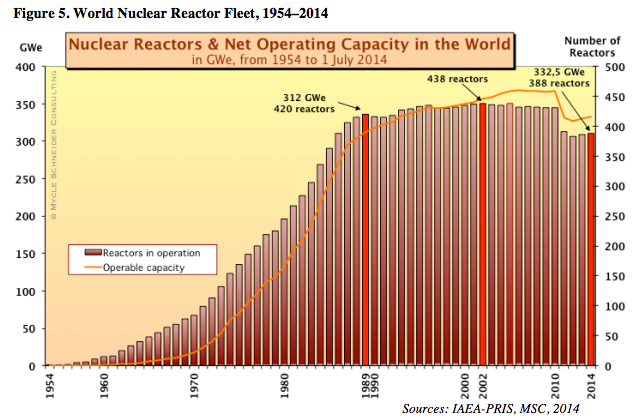 The biggest reason for that drop is due to the long-term reactor outages in Japan after Fukushima. Japan has 48 nuclear reactors, but only 2 have generated electricity since 2013, and none have produced any electricity since last fall.

That could conceivably change in the future — Japan’s nuclear regulators are currently inspecting 17 reactors and have declared two plants in compliance with upgraded safety rules. But it’s not clear how many reactors will actually restart, since nuclear power still faces sizable public opposition in Japan.

Meanwhile, Germany is in the process of phasing out its nuclear power program in the wake of Fukushima. The country closed 8 of its nuclear reactors in 2011, and has plans to shut down the remaining 9 between 2015 and 2022. (In the meantime, old-fashioned coal is making a comeback in Germany.)

The United States has also seen the early retirement of 5 nuclear reactors since 2012 — in Florida, Wisconsin, Vermont, and two in California. Some of those reactors were simply too pricey to keep open in the face of rising maintenance costs and competition from cheap natural gas and wind power. 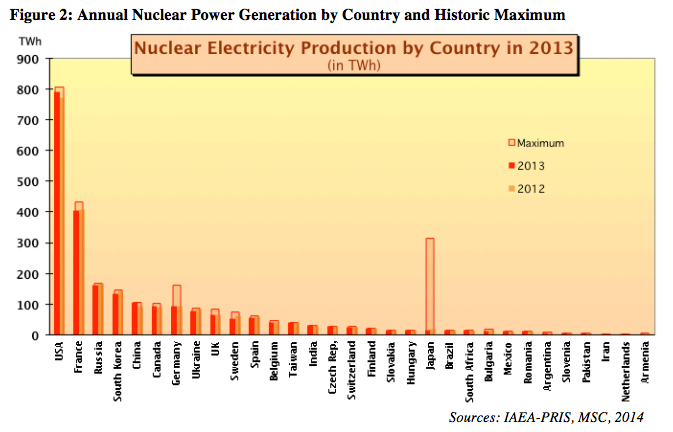 The United States still generates more electricity from nuclear power than any country in the world — about twice as much as France.

France still gets 75% of its electricity from nuclear power

Note that most countries are generating less electricity from nuclear than they have at their historical peak — particularly Germany and Japan. 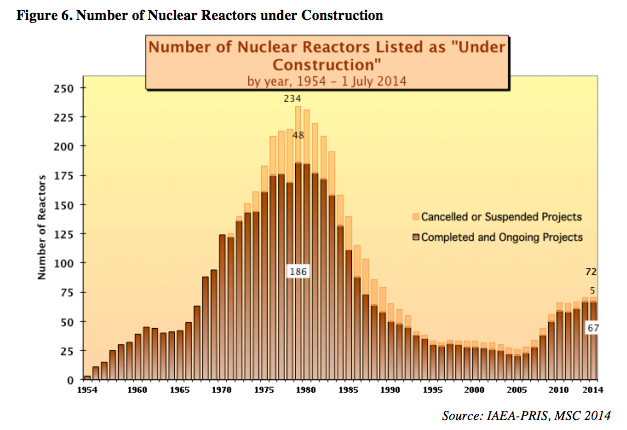 49 of the 67 reactors under construction have faced delays

It’s also worth noting that this number can mask many of the difficulties in building new reactors. Eight of those reactors have been “under construction” for more than 20 years — including the US Watts Bar Unit 2 project in Tennessee, which began in 1972, was stalled for years and then restarted recently, missed a deadline in 2012, and is hoping to get connected to the grid by 2015.

All told, the report notes that 49 of those reactors under construction have met with significant delays, ranging from several months to several years. Nuclear reactors are expensive and take a long time to build. They can face all sorts of obstacles in the meantime — from cost overruns to complex licensing processes to regulatory hurdles to popular opposition (the latter recently blocked construction of two reactors in Taiwan).

“Past experience shows that simply having an order for a reactor, or even having a nuclear plant at an advanced stage of construction, is no guarantee for grid connection and power production,” the report notes. 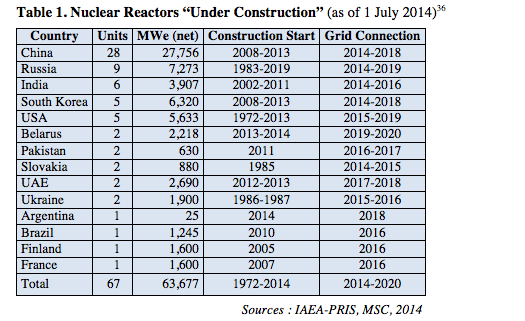 The report notes that four-fifths of new construction is taking place in Asia and Eastern Europe. China is the only country on a nuclear reactor building spree, with plans to build 28 new units by 2018.

‘next generation’ reactors have run into problems

A few countries, including France and Finland and China, are working on “next generation” reactors with higher efficiency and advanced safety systems. So far, however, those projects are bogged down in delays and overruns — the Olkiluoto project in Finland is three times over budget and 9 years late, while the Flamanville project in France is 4 years late. China’s two next-generation Taishan plants have run into fewer problems, but they’re expected to be more than a year late and won’t be online until at least 2015.

6) Without further action, nuclear power could vanish in 50 years 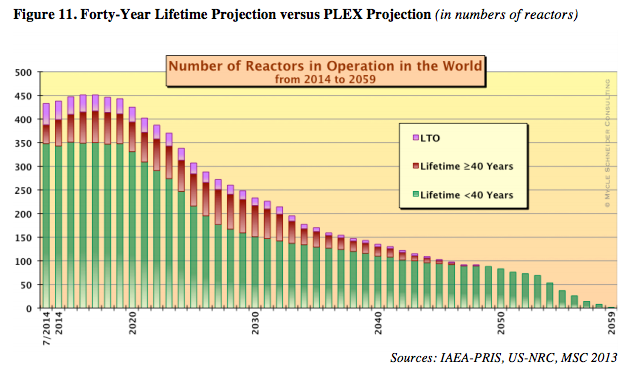 The chart above shows how long the world’s existing reactors are likely to last in the decades ahead. By 2059, most of them are likely to be retired. That means, unless the world goes on a frenzy of new construction, nuclear power will nearly vanish by mid-century.

Here’s how the authors figure: Without new construction, the average age of the world’s nuclear reactors has now reached 28.5 years. Many reactors may shut down once they hit 40 years, although some will likely get extended for longer than that (at a cost of $1 billion or more).

It all depends on the country. In the United States, many reactors were initially licensed to last 40 years, although they can apply for a 20-year extension — and, so far, 72 of the 100 existing reactors have received government permission to keep operating for 60 years.

Eventually, however, all of the world’s current reactors will have to retire — as the chart above shows, the report pegs this date at sometime in the 2050s. That means the world will have to build around 394 additional reactors between now and then just to maintain existing capacity. And if nuclear power is to expand above current levels, we’d have to build more than that.

That’s a daunting task. A variety of reports on climate change have suggested that a major increase in carbon-free nuclear power will be crucial to reduce global greenhouse gas emissions and avoid drastic temperature increases. But, right now, the world isn’t even building enough reactors to maintain existing capacity — let alone ramping up.