Two-child Policy and other disincentives should go. We need more babies, not less 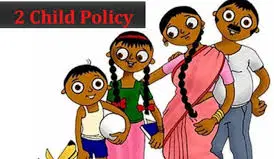 The BJP administrator of the Lakshadweep Islands has created a furore through proposals such as prohibiting anybody with over two children from contesting local elections. Similar prohibitions exist in Assam, Odisha, Maharashtra, Rajasthan, Telangana and Andhra Pradesh. This is silly. India and the world face not excessive but insufficient births.

China once enforced a single child policy, later allowed two children, and now encourages three. Its working age population is falling so it desperately needs more workers to boost GDP. For a stable population, the total fertility rate — children born per woman — should be 2.1. This will not immediately stop population growth: future mothers have already been born. So, population typically rises for two decades after reaching 2.1 and then flattens.

India’s fertility is plummeting. It must abandon bogus fears of excess population and prepare for a future with fewer and fewer people of working age (15 to 65 years old) and skyrocketing aged dependents. Improved medicine is raising life expectancy towards 90 years. New techniques keep prolonging life but at a high, rising cost. Societies need far more workers to finance care for the aged. Hence many countries have introduced incentives for more children. Alas, none has worked well. The cost of good child upbringing has shot up, so couples cannot afford even two children. Many countries are proposing free childcare, longer maternity and paternity leave, free child healthcare and other such incentives. Yet their fertility keeps falling.

India’s fertility rate has fallen from 3.4 children in 1992-93 to 2.2 today, and is projected to fall to 1.93 by 2025. This is not because of penalties like bans on standing for elections. It is because an aspirational middle class wants fewer children.

Far from having excess population, India is heading for the global trap of insufficient fertility rates, insufficient people of working age, and a huge excess of aged people needing costly medical care. Why then do so many BJP and RSS leaders (notably Mohan Bhagwat) worry about excess population? Mainly because of their paranoid belief that Muslims avoid birth control so the Muslim share of the population will rise and create Muslim-majority regions, threatening Hindu supremacy. A BJP leader is reported to have said the Hindu policy of “hum do hamare do” (we are two and have two children) has been converted by Muslims into “hum panch hamare pachees” (we are five and will have 25). The BJP stokes fears of Muslim immigrants from Bangladesh, whom Amit Shah has called “termites”.

Muslim population growth has long exceeded Hindu growth, but religious conversion has been a negligible factor. A major reason is traditional Hindu prohibition of widow remarriage. Second, many Hindus are migrant labourers, spending months away from their home. Third, Muslims are on average poorer than Hindus, and poor people have more children. Fourth, some of their religious leaders oppose birth control, even though most Muslim countries now encourage family planning. Selective abortion of female fetuses (detected by sonograms) is common among Hindus but forbidden by Islam.

The Muslim share of India’s population is up from 10% in 1951 to 14.2% in 2011, a slow growth over 75 years. But Muslim fertility is falling fast with rising incomes. It was just 1.4 in Jammu and Kashmir in 2016. India’s Muslim population share will rise slowly for some decades before stabilising, probably well below 20%. This carries no threat to Hindu dominance. Bangladesh’s fertility rate is down to 2, below replacement level. Its per capita income now rivals India’s. The economic rationale for migrating to India is gone.

What lessons flow for India? Abolish all disincentives for large families including bans on standing for local elections and penalties in entry and promotions in government services. Abolish rules reducing benefits for families with more than two children, including healthcare for mothers and children and nutritional supplements for pregnant women. Legislate male parental leave to make it easier for mothers to work. Upgrade anganwadis to proper pre-schools where feasible. Increase security for women and cut other barriers to female work participation, which is among the lowest in the world. Breed more workers and ensure work for them.

Swaminathan S Anklesaria Aiyar is consulting editor of The Economic Times. He has frequently been a consultant to the World Bank and Asian Development Bank.