Varanasi farmers use their blood to writer letter to PM Modi 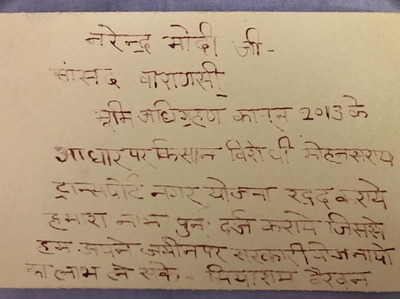 VARANASI. Thousands of farmers have decided to write letters in their blood to PM Modi to get their agricultural land back.
It started yesterday with more than 50 farmers using their blood to compose a letter. The farmers would continue writing letters till April 8 and would then send all these letters to parliamentary office if PM in Varanasi.”I am writing this letter with blood, do not mistake it for ink. I want my land back, don’t think I am a beggar,” read one such letter by farmer Mewa Patel.

In 2003, under transport nagar policy (TNP) in Varanasi, using land acquisition, lands of 1192 farmers were forcefully acquired. Farmers allege that due process wasn’t followed, and the lands were taken away from them and “illegally” registered in the name of Varanasi development authority. The work on TNP is yet to begin till date.

Deprived of due benefits from government, these farmers have been agitating for long. On Sunday, they assembled under the banner of Uttar Pradesh kisan khet majdooz Congress in Barwan village.

The farmers claimed that they have been compelled to write letter in bloods as they got no relief from PM Modi despite repeated appeals.

The farmers threatened to lay down their lives if government fails to return their lands constitutionally.