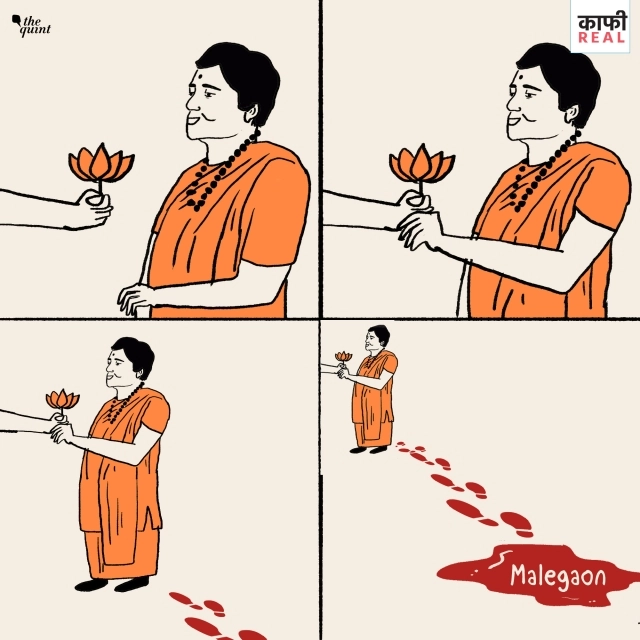 Whether you like khadi jewellery or pineapple on your pizza, Sharad Pawar or Ajit jokes, you have to give it to this government, they wear smart pants. While the appointment of Pragya ‘Go Godse Go!’ Singh Thakur has set the proverbial billi among the tukde-tukde qabutar, what the government has done is hit the proverbial pair of birds – pigeons again, one could assume – with one stone.

Like for earlier governments, for this government too, most institutions are quite proverbial – that is, to be used like proverbs to one’s advantage. The parliamentary consultative committee of the ministry of defence (MoD), which Thakur now finds herself a member of, is a statutory body. And that alone gives it its importance. But what exactly does a parliamentary consultative committee do?

The ministry of parliamentary affairs – and one knows the quality of its affairs almost every time one turns on the news when Parliament is in session – chalks up a list of MPs from both Lok Sabha and Rajya Sabha attached to a ministry and arranges that they meet in an Oprah Book Club fashion. As the term ‘consultative’ may suggest, they then chat about issues pertaining to the subject at hand, performing more the role of a ‘tank’ than dealing with ‘think’, and discuss, in a manner of speaking, government policies and their implementation.

Last Thursday, the 21-member consultative committee on defence was announced with defence minister Rajnath Singh heading it. Apart from Pragya-ji, the committee members include: BJP MP from Sasaram, Bihar, Chhedi Paswan; still detained under the Public Safety Act (PSA) in his home in Srinagar since the Centre suspended Article 370 in Kashmir, former J&K chief minister, National Conference MP and avid golfer Farooq Abdullah; former communication and IT minister in the Manmohan Singh government – best known for his alleged involvement in the ‘2G spectrum scam’ for which he was acquitted in 2017 – and DMK MP Thiru A Raja (the ‘Thiru’ stands for ‘Mr’, confusing people like me from immediately identifying him with the more familiar ‘A Raja’); BJP MP and businessman from Chikkodi, Karnataka, Annasaheb Shankar Jolle; Trinamool Congress MP from Dum Dum, West Bengal, and parliamentary committee veteran Saugata Roy; Congress Rajya Sabha MP and former J&K chief minister, as well as former parliamentary affairs minister, Ghulam Nabi Azad; NCP chief, former Maharashtra chief minister, Union defence minister and agriculture minister, Rajya Sabha MP and uncle of Ajit Pawar, Sharad ‘I have the numbers’ Pawar, who has been busy with other consultations and meetings of late involving politics, rather than statecraft.

You get the picture. In this mix, Pragya Singh Thakur’s name has been thrown in.

Now, she is, indeed, a toxic representative of the people – and i underline the toxicity of the people who voted her in without undermining their mandate. She was castigated by Prime Minister Narendra Modi publicly when she proclaimed Nathuram Godse to be a patriotic Indian. She remains an accused in the Malegaon blasts case.

But her real claim to fame – and golden ticket from ‘fringe’ to ‘mainstream’ – was her defeating ‘hyper-secular’ former MP chief minister and Congress leader Digvijaya Singh in the Lok Sabha elections.

So, while Thakur’s ‘elevation’ to the consultative committee on defence seems to give out all the wrong signals about the kind of politician this government values, the truth is probably a mix of this government parking her in an attic for later populist use, while making her inclusion certainly look, smell and feel like a promotion – thereby raising the cheer of her supporters, and goading her detractors to gnash their teeth with panache. On the bigger political canvas, this amounts to bringing delight to her supporters from witnessing her detractors gnashing their teeth – ‘polarisation’, for the wordy-wise.

But Thakur’s inclusion in the parliamentary committee is not the real scandal. It simply underlines the importance our governments have, over time, given to the ritual of MPs meeting to discuss matters of national import – especially this government, especially to issues like defence that, frankly, are decided elsewhere, by others.

So, making Pragya Singh Thakur a member of MoD’s parliamentary consultative committee is not a shocker. It’s not as if it’s Delhi Gymkhana Club.