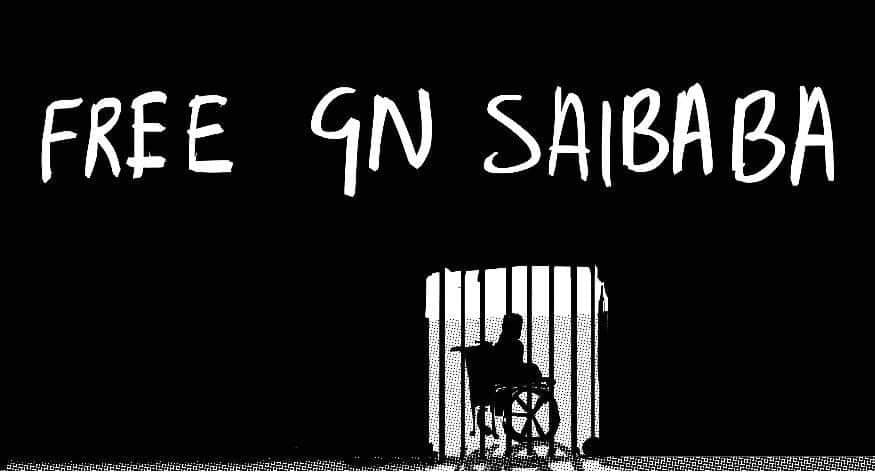 Prof GN Saibaba bail application, on medical grounds in the wake of Covid-19 in the Nagpur Central Prison, has been again rejected on 28 July 2020 by the Mumbai high court bench at Nagpur. The first bail application on medical grounds was rejected by the Mumbai HC bench at Nagpur in March 2018, and after that, his parole application has also been rejected. On 2 April 2020 we submitted an application to Divisional commissioner of Prisons, Nagpur, Maharashtra Home Department seeking release Dr. G.N. Saibaba on parole for 45 days on his health grounds under the severity of pandemic COVID-19 and also to visit his mother who is seriously ill from February 2020 suffering from Lymphoma cancer. The Parole was rejected by showing his brother’s place is in a containment zone, a fact which is not true.

Currently, his mother’s condition is critical, where cancer has been spread to her brain and she is not expected to survive for more than a couple of days based on the predictions made by the doctors. In the recent order rejecting his bail on 28.07.20, the prosecution suggests that since there is already one younger brother taking care and visiting the ailing mother, this reason cannot qualify Dr. Saibaba to go visit his mother on her deathbed. Even in this dire condition, it does not look like the Honourable Court will allow Dr. Saibaba to see his mother for the final time and mourn her circumstances.

Yesterday on 28.07.20, the Honourable bench cited that the circumstances about the case since the first bail rejection in 2018 have no changed, so they will follow the initial rejection order. The reasons for given by our counsel, Saibaba’s increasingly detrimental health and COVID-19 breakout in Nagpur Prison that threatens his life, have been casually dismissed by the court. They say he has not cited positive and is being kept in the highly confined Anda Cell where he cannot contract the disease. They also say that he has been provided 2 helpers.

Now, in the volatile environment of COVID-19 breakout in prison, he gets his meals and help from the outside sources, beyond the so-called ‘ COVID-19 safe’ anda cell. So clearly, it’s not a contained zone. Also as described by Saibaba in his phone calls, the helpers are being coerced and have submitted multiple applications to the Jail authorities, saying that they are not in the mental condition to volunteer for helping him. Saibaba described that he has been living absolutely unhygienic conditions without anyone to support his basic needs and requirements.

It seems as if the court underestimates the gravity of the situation, especially with regard to the spread of the virus in the overcrowded prisons. Saibaba will be shifted to Hyderabad
Beyond that, they claim the only source of the deteriorating ill health is the applicant himself and the medical officer in Jail assures that he is being given all the treatment. Now the court hasn’t provided the family any of his multiple medical documents and reports from his frequent trips, often emergency, to the hospital.

We have no way to get the reports and verify it with our family doctors and consultants. Moreover, we do not even know the conclusion of these reports. They were not even provided to the patient in question when he wanted to enquire about his health. Meanwhile, the doctors from the Government Hospital did specify previously a treatment routine for the different ailments, but this routine, including physiotherapy, couldn’t be conducted within the jail premises.

Thus, even according to the government doctors he has been under consultation, the conditions of incarceration make it impossible for him to receive treatment. The prosecution still claims that he is being provided treatment, but in that case, the treatment is not stabilizing his health condition. His health sees no improvement, evidenced from his frequent trips to the medical bay in jail as well as to the hospital. The court has turned a blind eye to these factors, seemingly only taking the words of the prosecution at value. On his phone call on 11.07.20 Saibaba informed us of the terrible situation in the prison personally. He is unable to move his left hand and even his right hand constantly shivers right now. He has been getting frequent block outs and fainting spells, alongside with his severe back and body aches. Since we do not have any reassurance from the words of the prosecution claiming his alleged well being and condition, we requested for the scans and reports from the Government hospitals in order to consult with our personal medical consultants, a request which was not granted. Thus, in this situation, we are still not aware of the real condition of Saibaba’s health.

The last time we had access to the Medical reports was in early 2018, where a dangerous cyst in Dr. Saibaba’s brain was identified, perhaps responsible for his continued ill-health. But no further investigation on this matter was pursued.
The court’s decision to reject Dr. Saibaba’s bail in this condition is an extremely apathetic decision. On his phone call, he told us that if he does get COVID-19 they will not help him at all. No one in the barrack will come close to him and he cannot survive on his own, without the helping hand of inmates. He said that they will leave him to die in that scenario.

The politicians and ardent supporters of the ruling dispensation like Swami Aseemanand, Sadhvi Pragya Thakur etc. were not only granted bail but Sadhvi Pragya was granted bail specifically on health grounds, though she was found perfectly fit for election campaigns and later function as a full time parliamentarian. Comparatively herein is a case of an already 90 percent disabled – wheelchair bound person, whose condition has so worsened in the solitary confinement that a dozen ailments has circumscribed his being, and still in the threat of COVID 19 Pandemic.

Under these severe health conditions and based on the merits of the case of Prof. G.N. Saibaba, I request to everyone national and internationally to raise your voice for the release of GN Saibaba to appeal to the  Central and Maharashtra Governments.

I request to all kindly help him to secure his life as per the Nelson Mandela Prison Rights and Disability Rights.