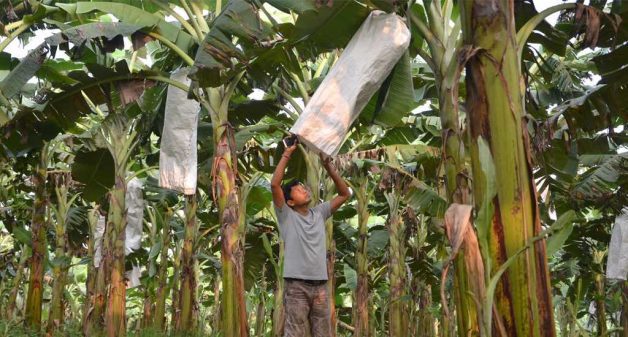 Debabrat Rabha in his banana plantation in Goalpara district. (Photo by Abdul Gani)

Rudra Kanta Rabha, a tribal man in his late 30s, in a sleepy village in Goalpara district of Assam, used to hide from people and police to carry out his job some 15 years ago. But today Rabha is seen smiling and talking to the people in his neighbourhood as he works in his banana plantation. Now he is one of the busiest persons in the locality.

“I’m glad of what I’m doing now. I regret what I did in the past,” a thoughtful Rabha told VillageSquare.in while working in his plantation near the insurgency hit Assam-Meghalaya border. Rabha is a reformed man now who used to work for a rebel group for several years. “I used to work as a link man. I don’t want to live like that anymore. Now I’m happy with my work and also earning good money,” added Rabha, who lives with his wife and mother.

Decades-long insurgency has hit the northeastern states badly. Thousands including civilians, security personnel and journalists have been killed. “The northeast region has been witnessing conflicts for several decades, with some groups and organizations chasing rebellion either for their identity or seeking separation from India or demanding a separate state,” senior journalist Sushanta Talukdar told VillageSquare.in. “As some conflicts have remained unresolved, the region has been gripped by insurgency and counter-insurgency.”

Not just Rabha, there are other youth in the locality who have reformed themselves to be better human beings. Paban Das had been jailed several times before coming to the mainstream. The prime mover is Debabrat Rabha, who motivated dozens of youth to give up arms and join the agricultural revolution.

Debabrat, who was born in a lower middle class family now owns more than 60,000 banana plants spread across 120 acres of land. His annual turnover is around Rs 9.7 million. “I reached this position after working relentlessly over several years. And it’s more satisfying when you can motivate others with your work,” Debabrat, a native of Madang village dominated by Rabha tribes, told VillageSquare.in. “I feel proud helping other youth who want to work and prosper.”

Debabrat started in a small way in 2009 with his nephew Hiran Rabha. Initially he tried growing sugarcane but later shifted to banana cultivation. He planted just 1,000 banana plants to begin with. The local youth gradually came to know about his development through social media and other means. Many of them approached him for help. “Some of the local youth including reformed rebels came to me. I saw their interest and so I assisted them with technical and financial support to begin with. They are doing well now,” Debabrat added.

Paban Das, now a reformed man, said that Debabrat helped and motivated them to grow banana and lead a decent life. “I was a bit reluctant to come out from my past deeds. But now I don’t need to depend on others to earn my livelihood,” Paban Das, who looks after his son and wife besides his old parents, told VillageSquare.in. “We didn’t have much idea about how to go ahead. Debabrat has been helpful.” Paban Das cultivates paddy also to get some additional income. 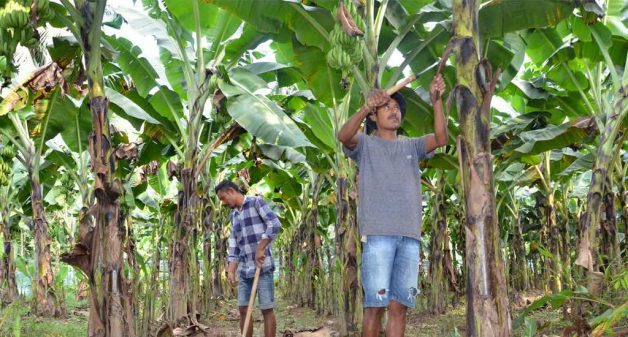 Rudra Kanta Rabha and Paban Das have joined the mainstream with a new livelihood. (Photo by Abdul Gani)

The reformed Rudra Kanta Rabha and Paban Das have earned nearly Rs 1 million last year selling their first generation bananas along with other members of their group. Debabrat Rabha said that there are more than 300 banana farmers now in their locality who have planted more than 200,000 banana plants. “It’s a good sign. It’s a banana revolution,” said Debabrat.

Talukdar said that the insurgency has deterred investments in the region resulting in lack of job avenues for youth, leading to rising unemployment. “It also pushes a section of youth towards rebel groups and the vicious cycle continues,” said Talukdar, editor of NEZINE, an online magazine with a focus on the northeast.

“There were disturbances like extortion and kidnapping in these areas from various insurgent groups. But things are changing. We are very happy to see some of the youth who had joined the insurgent groups come back to the mainstream. We are eager to help them,” Bhabesh Chandra Rabha, 52, who teaches at Khekapara MV school, told VillageSquare.in.

Bhabesh who is also the secretary of Purbanchal Rabha Samaj, a local body of Rabha tribes, said that they were extremely happy to witness the change among their youth. In fact, the Purbanchal Rabha Samaj, has helped, by lending their land to Debabrat for banana cultivation. Bhabesh said almost 60% of the local youth who were with militant outfits have given up arms and started a new life. “Some of them take up other works, while others engage themselves in banana cultivation,” he added.

Abdul Gani is a journalist based in Guwahati.