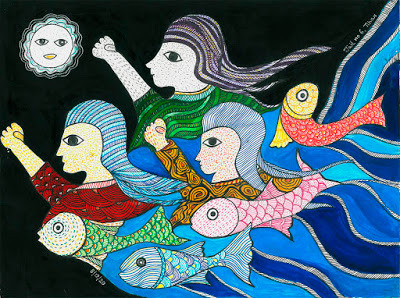 “Once a people arise, they never go away.” -James Baldwin

To mark over a year of the unlawful incarceration of Devangana Kalita and Natasha Narwal under the draconian UAPA, Kalita and Narwal’s friends, family members and other members of the society met together in a session titled ‘Azaadi ki Justajoo – In Pursuit of Freedom’ on June 13, 2021. Kalita and Narwal were arrested in relation to anti-CAA, anti-NRC protests for which they were granted bail. Immediately after their bail they were arrested again for serious charges of allegedly instigating crowds in what led to the communal violence in northeast Delhi in February 2020. Their attempts at receiving bail have been denied except for an interim bail for Narwal after she lost her father, Mahavir Narwal, due to COVID-19 in May 2021.

Chaired by Vani, the session began with Astha, a speaker from Pinjra Tod – the women’s collective of which Narwal and Kalita are members. In speaking about Pinjra Tod’s politics, Astha pointed towards the many recent government legislations such as CAA-NRC, abrogation of Section 370 in Jammu & Kashmir, the Transgender Persons (Protection of Rights) Bill of 2019, etc which work towards designating whose bodies can or cannot be citizens. What does it mean to be in jail is a question that needs to be engaged with not only by those who are in the institution but also by those who stand outside it. Kalita’s partner Andre Ling and Narwal’s Nikita spoke about Kalita and Narwal – their strength, their politics, their memories and their activism within the confines of prison. As Narwal wrote in their published letters from jail – “… Basically prison is an extension of the logical end of all the unfreedoms in the society one has been fighting against, everything meant to crush one’s autonomy. But I have seen—even in a place like this which is meant to strip away one’s autonomy and humanity, reduce people to bare life—people still manage to retain some, hiding them in nooks and corners, hiding them from always prying eyes.”

Poet Sabika Abbas Naqvi then took over to recite three of her nazm. The first sentence from her first nazm titled ‘Pinjra Tod’ can perhaps be used to summarise the essence of the session – ‘Aaj hum apni besharmi ki baatein karenge…’ (today we’ll talk of our shamelessness). The first theme of the session was ‘Women Fight Back’. Lyla Mehta of the Institute of Development Studies where Kalita studied spoke of the relevance of fighting back through the lens of Kalita’s commitment towards Human Rights and Social Justice from early stages of her academic life. Jagmati Sangwan of All India Democratic Women’s Association (AIDWA) located Narwal’s activism in the socio-political context of Haryana and the activism of her father, grandfather and aunts. This was followed by the poetry of Soibam Haripriya, a Postdoctoral Fellow at the Department of Conflict & Development Studies, Ghent University. Narwal’s brother, Akash, then spoke of his sister’s tenacious sense of justice, her love for children and how she continues to engage, along with Kalita, with matters of social justice from within prison.

The event moved forward with its next theme titled “Global Crackdown on Activism”, and it was initiated with Professor Mary Lawlor, who is currently the United Nations Special Rapporteur on the situation of human rights defenders. She reminisced how the past year has been particularly challenging for the human rights defenders of India due to the added circumstance of the pandemic. Lawlor went on to criticise draconian laws like the UAPA and how the mandate to scrap it has not been taken forward by the authorities. She also mentioned Safoora Zargar’s arrest and stressed on the importance of the continued dissent outside jail which is the only ray of hope for jailed activists.

Lawlor’s address was followed by world renowned activist and cofounder of women’s organisation Naripokkho in Bangladesh, Shireen Huq. Huq highlighted the similar atrocities by the state that take place in Bangladesh and how the license to execute such activities can be traced back to similar draconian laws from the colonial period. She threw light on the custodial violence, judicial and extra judicial killings of journalists and activists, enforced disappearances of dissenters and other state-driven problems of Bangladesh. Huq shared her motivation behind founding Naripukkho and reiterated how misogyny manifests itself in similar forms beyond the confines of the territoriality of a nation-state. The second theme ended with Huq advocating for more independent platforms to challenge the state atrocities.

The third theme, titled “Challenging the carceral state” was led by a gut-wrenching anecdote of life in prison by member of Jan Jagran Shakti Sangathan (Aria, Bihar) and trans activist Tanmay, who recalled the time he and his other two companions Nivedita and Kalyani were taken 250 km from their home district to jail in Samastipur because they insisted the police to allow a gangrape victim’s complaint be read out to her as she couldn’t read. Tanmay described his experience in prison as ‘dehumanising’ and pervasive. He questioned the titular name of prisons being “correctional facilities” and pointed out the irony in the name. He mentioned how his gender dysphoria heightened due to constant misgendering and pervasive security checks. Despite the traumatic attacks on prisoners’ mental health throughout the prison, he ended his address by mentioning how they would get together every night to sing and dance in order to contain even the slightest semblance of sanity to keep them standing.

Poet Akhil Katyal presented three poems that he wrote remembering the activism and arrest of Narwal and Kalita. Suchitra Vijayan of The Polis Project condemned the carceral nature of the state and how it is trying to reform the fundamental idea of the nation. Vijayan pushed for the need to educate the youth regarding the state’s treatment of the dissenters and how everyone’s rights are at stake.

Black Lives Matter activist and Kalita’s friend Joshua Virasami talked about his own experience as a working class and racially discriminated man living in Britain and pushed for a radical politics of care when it comes to reforming the prison systems as well as other institutions with a carceral attitude towards citizens.

The concluding address of the third theme was taken over by feminist and Historian Dr Uma Chakravarti. She expressed her anger and anguish towards the current condition of the system of rights and justice of India; how the judiciary has become the spokesperson of the government; and how chaotic the state of affairs has been since the past few years. She questioned whether this situation is what the freedom fighters had in their minds while fighting for the country’s independence from colonial rule. Dr Chakravarti appealed for massive support for Narwal and Kalita’s petitions from the rest of the country.

The session came to an end with Kalita’s mother Dr Kalpana reading out a few letters from her and showcasing her support and pride for both the women.The session was recapped by Shambhawi Vikram, a member of Pinjra Tod, which was followed by the final wrap up of the session through a powerful recitation of the poetry Sab Yaad Rakha Jayega by poet Amir Aziz himself.

: * Isheeta is a features writer and a student of Gender Studies at Ambedkar University, Delhi. She enjoys dissecting popular culture through a gendered lens, adding new books to her overflowing book rack and sipping coffee in quiet corners. She is currently an Intern at Kractivist.org.

*Vaidehi is currently pursuing her master’s degree in Gender Studies from Ambedkar University Delhi. She is interested in politics, public policy, gender, pop culture, and loves to stay caffeinated and revisit basic mathematics from her school days. She can be reached out on [email protected].  Presently she is interning at kractivist.org.