Berta Cáceres, the Honduran activist who was murdered on Thursday, is one of at least 1,000 environmental and land protesters who have been murdered since 2002 and the deadly trend is rising. The NGO Global Witness say 2015 is likely to have been the deadliest year on record. 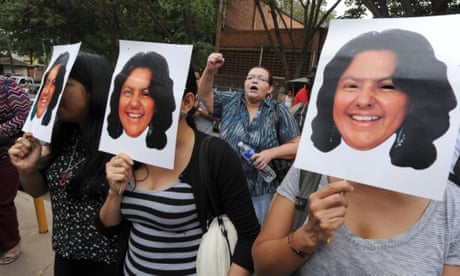 Remembering Berta Cáceres: ‘I’m a human rights fighter and I won’t give up’

Around the world in 2014, the latest data available, the killings averaged two a week, according to Global Witness. The deaths result from conflicts over mining, hydropower dams, plantations and logging, with three-quarters of the lives lost being in South America.

“We are seeing an upsurge in the scramble for land and natural resources, which means more and more companies are encroaching further and further into the lands of indigenous people,” said Billy Kyte, from Global Witness.

Honduras is the most dangerous place to protest against developments, with more deaths per capita than any other country: 101 between 2010 and 2014, according to Global Witness’s report How Many More? At least three of Cáceres’s colleagues, also protesting against the Agua Zarca cascade of four giant hydropower dams, had been murdered previously. “They follow me. They threaten to kill me, to kidnap me, they threaten my family. That is what we face,” said Cáceres in 2014.

Brazil, South America’s biggest country and containing much of the vast Amazon rainforest, suffered the greatest death toll of people defending their lands and the environment, with at least 454 killings from 2002 to 2014. But the violence pre-dates the records assembled by Global Witness, with the infamous murder of Chico Mendes by a rancher occuring back in 1988.

Other Latin American countries have seen dozens of murders, with 80 deaths in Colombia from 2002 to 2014, 57 in Peru and 45 in Mexico. Outside this region, south-east Asia is the riskiest place, with 84 recorded deaths in the Phillippines and 21 in Thailand during that time.

Global Witness regard their estimates of killings as very conservative, due to the difficulty of verifying reports and the fact that some murders will not be reported at all. The group highlights scant data in much of Africa and areas like China, central Asia and the Middle East, where there is limited civil society monitoring and the media are often suppressed. “Our estimates are certainly the tip of the iceberg,” Kyte said.

About 40% of the victims recorded by Global Witness in 2014 were indigenous people, who frequently have little political power or access to the media with which to oppose developments in their homelands. The victims are often very vulnerable as they live in remote communities, far from law enforcement authorities. Cáceres was a member of the Lenca indigenous group, the largest in Honduras, and whose lands are threatened by the dam project.

“There is also high levels of impunity, which means people get away with murder,” said Kyte. In Honduras, official figures released in 2013 found 80% of killings there went unpunished, with local groups putting the number for activists even higher.

Across the world, where the suspected perpetrators could be identified by Global Witness, paramilitary groups, the police, private security guards and the military were implicated. “The true orchestrators of these crimes mostly escape investigation, but available information suggests that large landowners, business interests, political actors and agents of organised crime are often behind the violence,” says the Global Witness report.

The Inter-American Commission for Human Rights (IACHR) can demand precautionary measures from states in the region, requiring them to provide police protection for activists at risk. “But the problem is that it is not being implemented on the ground,” says Chris Moye, also at Global Witness. Cáceres had no police protection at the time of her murder, despite having received many threats.

The improvement of legal protections are also slow. In Honduras, a law to protect activists has been drafted but has not been passed, according to Moye.

In an IACHR report on Honduras released in February, the commission’s president, James Cavallaro, said: “We are particularly concerned that these violence and insecurity levels are exacerbated by the lack of public policies to address the inequality and social exclusion that affect large segments of the population.” The report said: “The high levels of violence faced by Honduran society have a particular impact on human rights defenders [and] indigenous peoples.”

“The true authors of these crimes – a powerful nexus of corporate and state interests – are escaping unpunished. Urgent action is needed to protect citizens and bring perpetrators to justice,” said Kyte. “Land, no matter what the commodity prices are, will always be a source of conflict.”

Separate data compiled on the murder of wildlife park rangers, who face death for protecting animals from poachers and militias, shows that in 2013, more than 100 rangers died, according to the International Ranger Federation, while 140 have died in one park – Virunga in the Democratic Republic of Congo – in the last 20 years.

Activist and community leader Hitler Ananías Rojas Gonzales, 34, was shot five times in his home in Yagen, Cajamarca district on 28 December, the day after he was made mayor of his village. He had been protesting against the construction of the 175-metre-high Chadín II dam planned for the Marañón river in the Amazon basin, which will displace about 1,000 people. According to local reports, Rojas Gonzales had been the subject of multiple death threats and had told locals he was prepared to defend the river with his life, choosing not to employ bodyguards. Even though he was attacked by several gunmen, only one man has been convicted of the murder, receiving a six-year prison sentence for the crime. The Chadín II dam is one of 151 new dams that are planned in Peru in the next two decades.

Human rights activist and anti-mining campaigner Teresita Navacilla, 60, died in hospital on 30 January, three days after being shot by two gunmen in King-King village, southern Mindanao. She had been protesting against the $2bn King-King copper-gold mining project, recently approved by the Filipino government. The army were blamed for the killing, a claim it denies. Her organisation was protesting about the impact the open-pit mine would have on local people and biodiversity. Navacilla was one of five activists killed in the Philippines in January.

Farmer and adviser to the Chico Mendes Institute for Biodiversity Conservation, Raimundo dos Santos Rodrigues was shot 12 times and attacked with a machete in an ambush when returning home on a motorbike with his wife in Bom Jardim, Maranhão, on 25 August 2015. According to local reports, two assassins fired at the couple as they crossed a bridge, hitting both. Dos Santos Rodrigues died but his wife survived. He was renowned for denouncing illegal loggers working in protected indigenous reserves and had received numerous death threats for his activism. His murder remains unsolved.http://www.theguardian.com/environment/2016/mar/04/berta-caceres-environmental-activists-murdered-global