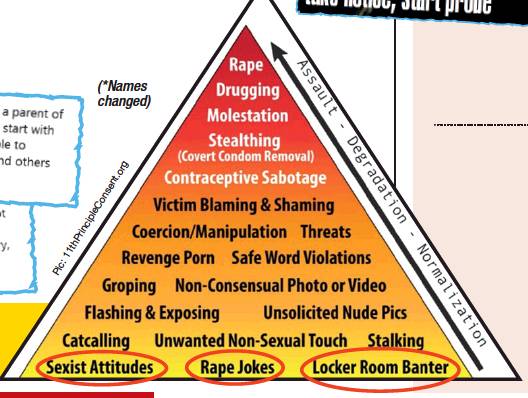 Toxic masculinity starts young,” Swara Bhasker tweeted on Tuesday, referring to the Instagram group Bois Locker Room, that’s been trending on Twitter since May 3. A proof of just how young toxic masculinity starts, the group consists of mostly teenaged schoolboys from prominent Delhi schools. The primary objective of the group was to discuss the anatomy of girls who were fellow students or acquaintances, share objectionable images of mostly minor girls without their consent and pass lewd statements. After a group of girls and a couple of boys decided to leak the chats of this group on Sunday, ‘locker room talk’ and its role in propagating rape culture became a hotly discussed topic.

Many have pointed out that while the case is appalling and the content lurid, it has not shocked them. For such ‘locker rooms’ are all around us. From private social media groups and WhatsApp chats in colleges to informal offline gatherings at workplaces, many boys – and men –discuss and objectify women as a recreational activity.

HOW THE LOCKER ROOM CULTURE STARTS

MALE ROLE MODELS: The first introduction to this kind of behaviour comes from male role models. “They have seen the men in their own homes make remarks about, ‘How tight her a** is’ and ‘How deep her cleavage is’. Men talk abut how many women they’ve hooked up with, associating it with manliness,” says clinical psychologist Dr Varkha Chulani.

PEER PRESSURE: “Social acceptance among peers means everything to youngsters, and they can go to any extent to become a part of the ‘cool group’,” says Dr Ratna Sharma, psychologist.

‘SEX IS TABOO’ MINDSET: “We have always shied away from talking about sex and sexuality. Hence, we see youngsters refer to misinformation available on web instead. What do we see in pornography? It is not an act of sex but of torture. These sites are easily available to teens and that’s their sex education 101,” says Dr Shalini Sharma, a physiologist. “As far as schools are concerned – and I cannot stress upon this enough – sex education and mindfulness has to be an integral part of the curriculum,” says Dr Ratna, adding, “They need to learn to not objectify the body of the opposite gender.”

THE NUMEROUS ‘BOYS LOCKER ROOMS’ THAT ARE ALL AROUND US

‘LACK OF ACTION IS DISHEARTENING’

Rashika Kumar, a research scholar, says, “In college, a guy friend told me about a private Facebook group in which our batchmates would share pictures of girls from the college and rate them. My friend eventually called them out on it and they kicked him out of the group. When I complained about it, they did pull up the boys but the tone of the rebuke was very mild. I clearly remember one teacher smirked and said, ‘These boys!’ The tone was of amusement. It was so disheartening.”

‘OBJECTIFYING WOMEN IS A RITE OF PASSAGE’

Devika*, an aspiring fashion designer, had to transfer to another college after her morphed pictures were posted in a WhatsApp group by classmates. She says, “Unfortunately, objectifying women is almost a rite of passage for most men. Such behaviour is seen as something boys will do. People say they will learn when they are older. But how will they learn if you don’t punish them? The behaviour and culture needs to be called out, not just the act.”

‘TECHNOLOGY IS JUST A MEDIUM’

Abeer Sharma, a 32-year-old software engineer, who admits to have been privy to many such groups over the years, says, “First in school and later at work, I would see guys just sitting around and talking about women in the crudest of terms. In school, this guy had some pictures of a girl from class – hard copies – and he distributed it among the guys. The technology is just a medium.”

‘IF YOU OBJECT, YOU AREN’T ONE OF THE GUYS’

Ravi Sharma*, a management executive, recounts, “I was part of a WhatsApp group where guys would share pictures of colleagues and friends and body shame them or pass lewd remarks. I left the group but yes, I never objected to what was being shared there. You can’t do that because then you are ostracised. Suddenly, you aren’t one of the guys anymore.”

‘AT OFFICE PARTIES MEN WOULD DISCUSS THEIR CONQUESTS’

Niti Bansal*, who used to work with a consultancy, “At office parties, a group of about 8-10 men, who called themselves the Big Boys Club, would go into a room and talk about women. This conversation included talks of their ‘conquests’ and objectification of the women around them. All of these were grown men, some of them in their 40s with kids – even daughters – of their own.”

‘WOMEN WHO CALL THIS OUT ARE UNCOOL’

Prerna Ashok, who works in the hospitality industry, saw several of her friends turn against her in college when she called out some of her old collegemates for circulating her pictures on a similar group. She shares, “Just like in this case, I would see women jumping to the defence of their friends, boyfriends, or brothers when they were called out for being sexist. The ones who would oppose them would be labelled ‘psycho-feminists’ and ‘uncool’. I once had a classmate ask me, ‘Why can’t you be more chill like those girls?’”

A statement issued by the Delhi Police says, “A case FIR under relevant sections of the IT Act and the IPC was registered at PS Special Cell and investigation has been taken up by CyPAD Unit. The concerned platform, i.e. Instagram, has been asked to provide the details of the alleged accounts involved in the group. The details are awaited. As of now, about 10 members of the group have been identified. The identified members who are major, are being examined. The minor members of the group are being dealt with as per the provisions of Juvenile Justice Act. The devices used to engage in the offensive, vulgar communication have been seized from the identified group members.”

SHOULD GIVE STRICTEST PUNISHMENT: DCW

Swati Maliwal, the DCW chairperson, says, “Right now, one boy has been arrested and police is questioning others. All of them will be arrested, and as per law whatever is the punishment it should be given. But they should get the strictest punishment. The fact is that the harassment has not ended and they are threatening the girls who exposed them.”

Rakshit Tandon, who conducts cyber security training in schools, says, “After this news surfaced, I started receiving panicked messages from parents and students. In 24 hours, I received over 300 messages. Participants of the group and their families are also getting threats on social media. We should let law take its course.”

“We are a group of seven girls whose pictures were shared on the group. One girl received a call from the mother of one of the boys. She was crying and asked for forgiveness. She further said that since there were 26 boys in the group, the blame should not be entirely on her son. She added that she understands that her son did wrong but she would do anything to save him. She repeatedly asked the girl to take back the case,” says a 19-year-old girl who is one of the victims. She adds that the boy’s mother got the girl’s contact because they both are from the same school in Delhi.

WHAT TO DO WHEN DEALING WITH A LOCKER ROOM SITUATION

21-year-old Haris Khan, a resident of Defence Colony, is reportedly among the first one who found out about this group and shared the screenshots of the chats. “A minor boy was randomly added in this group on Friday. He did not know a single person in the group. After he saw the conversation and pictures on the group, he took screenshots and sent it to a friend whose pictures were shared in the group. She then shared the screenshots with me and I was absolutely taken aback… We tracked down eight girls whose pictures were circulated in the group, five of whom were minors. I suggested we should file a police complaint or at least report the boys’ accounts. I also thought we should first have permission from the underage girls if they are comfortable taking this up with their parents,” says Haris.

So what should you do if you find yourself a part of a similar toxic group? “No matter how overwhelming it may be, you have to reach out to parents or relatives you trust. Simply quitting the group is not the solution. We always suggest that youngsters do not take screenshots or forward those messages to anyone, even if their intention is to inform or warn others. Hand over the phone to guardians, teachers, or parents, who can reach out to the police. They need not worry or be scared if they haven’t indulged in such conversations. The sooner you raise an alarm, the better,” says Rajendra Kumar, a cyber security expert.

WARN YOUR CHILD IF YOU SEE HIM INDULGING IN TOXIC BEHAVIOUR

If a parent has discovered that their child has sent such lewd messages and/or has been part of such a group, what is the best way to tackle the situation? Dr Varkha replies, “The key is to educate and teach the kids the consequences of what they do. Ask the child to sit down, show their phone to you, and explain what he was thinking. Have him delete the photos in front of you, send out an apology to the person concerned and stop associating with friends who encourage this behaviour.”

One of the victims of the current case tells us, “I was very scared to confide in my parents as I felt that they would be furious with me. I finally did tell them, only to be met with a hug from my mom. She told me that it is not my fault and that she and my father will stand by me.” She adds, “Though we are getting a lot of support on social media, it is only making the boys more aggressive. They have been blackmailing us and they have now created another group, where they have started sharing morphed pictures of us as well. They also hacked into one of the girls’ accounts after this incident.”

Rakshit Tandon, a cyber security advisor to police departments, who also conducts cyber security training in schools, says, “Report the account immediately under the right section – bullying, nudity, non-consensual image sharing, etc. This is important because then the social media platform can easily investigate and block the account. If the section is wrong, they will not take any action. You should also report it to cybercrime.gov.in. You can report anonymously too. Do not contact the person who shared your photos.”

Rooheen Kalra, advocate, Delhi High Court and District Courts, says, “Under Section 228A of the Indian Penal Code, a victim gets protection against revealing of his/her identity, and those examining the case – police, lawyers, and attorney – cannot reveal the name of the person in question on a public forum.”