The idea of “vegetarian” diet has spread throughout the world, thanks to many Hindu and Jain immigrants in the USA and the UK and the popularity of yoga. However, not all Hindus are vegetarian. In fact, most aren’t. Since vegetarian practices distinguishes Hindus from other communities, and was seen as “quaint” in western societies until recent times, it has become the defining trait of Hinduism, statistics notwithstanding.

Hindus can be vegetarian and non-vegetarian. Hinduism is a plural religion, an umbrella term for many jatis, sampradayas and paramparas, some of whom may be vegetarian some of the time, or not at all. There is no such thing as a Hindu commandment telling Hindus what to eat or not to eat. This obsession with reducing Hinduism to a single behaviour is common amongst two groups of people: loud Hindutva radicals and their sworn enemies, the Hinduphobes. There is no such thing as a Hindu commandment telling Hindus what to eat or not to eat. (Credit: pinimg.com)

The story of a Tamil saint reveals Hindu attitudes towards food. Two kinds of devotees visited a Shiva temple: a vegetarian priest who followed all the rituals and a tribal hunter who did not know any ritual. Every dawn, the priest would conduct the rituals as prescribed by the scriptures. At dusk, the hunter would reach the temple and give the deity there all that he had found in the forest that day: flowers, water from mountain springs and the best portion of the game he had hunted that day. The hunter carried the flowers in his hair, and the water in his mouth (which he spat out). The game he would chew to make it tender and offer it to the deity. The next dawn, the priest would find the meat, the bones and the dried flowers inside the temple and would be filled with revulsion. This cycle continued for weeks. On Mount Kailash, Shakti asked Shiva who was the favoured devotee?

Shiva decided to test the priest and the hunter. The Shiva-linga in the temple sprouted eyes. When the priest saw this, he felt it was a sign of divine blessings. But then one of the eyes started to bleed. Thinking this to be bad luck or a sign of divine rage, the priest ran away. The hunter, however, on seeing the bleeding eye, tried to heal it using forest herbs. Unable to stop the bleeding, he decided to cut out one of his eyes and give it to the deity. That stopped the bleeding in one eye, but then the other eye started to bleed. So the hunter decided to cut out his other eye. But that would make him blind and he would not know where to spot the deity with the bleeding eye. So to mark the spot he put his foot on the bleeding eye that needed to be replaced with his eye. Just as he was about to blind himself, Shiva appeared and stopped the saint. 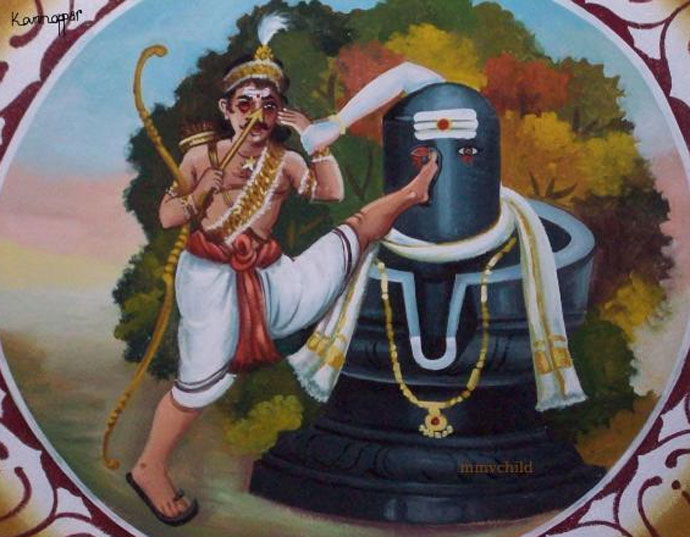 An image depicting the tale of a hunter who is being stopped by Shiva as he tries to cut out his second eye. (Credit: Photos.wikimapia.org)

Through this fantastic story, we are being told that what matters to the divine is our underlying emotion, not our ritual behaviour? God does not care about social hierarchies, our ritual notions of purity and contamination. God only cares about the human ability to love: the ability to overcome our own insecurities to take care of others in pain. Aham (ego) makes us think we are purer and superior to others. The journey to aatma makes us think that no one is impure or inferior, that everyone is valid and worthy of respect. What matters is not the ritual worship of the priest, but the love of the hunter. Rituals need to be an expression of love, not a mechanistic practice, or a tool to indulge the ego by dominating others.

Different communities in India have different food habits. And there is no one rule. For example, many people think all Brahmins are vegetarian. That is not true. In Bengal, Brahmins eat fish, and sacrifice goats and buffalo to Kali as part of Shakto tradition. In Kashmir, some Brahmin communities offer meat to Bhairava, a form of Shiva. In South India, Brahmins are vegetarian. Highly educated, well-versed in mathematics, they migrated early to urban centres across India as accountants, journalists and bureaucrats. Exposure to them created the classical “Madrasi” stereotype in Bollywood films, who eats only veg food. This eclipses the vast non-vegetarian traditions of south India.

Some of the most successful businessmen of India are from the Jain community and the Vaishav communities of Gujarat and Rajasthan. They are strict vegetarians. Since many foreign businessmen deal with them, they assume that all Indians are strict vegetarians. Jains are not Hindus (they do not worship Shiva, Vishnu or Brahma), though they fall in the larger framework of rebirth traditions (sanatan dharma). This Marwari and Bania culture also eclipses the vast non-vegetarian traditions of north India.

In Hindu Puranas, Vishnu is a strict vegetarian god, but Shiva eats whatever he is given and the Goddess loves blood. Again this is not a strict rule. For when Vishnu descends as Ram, he hunts deer for food (an idea that many vegetarian Hindus reject rather violently). In Jain scriptures, Krishna is shown as participating in a wedding banquet of Nemi-nath, where animals are slaughtered. Also as Narasimha, the man-lion avatar, Vishnu drinks blood. Shiva being a hermit accepts whatever he is offered. In his Gora-Bhairav gentle form, he is offered fruits and milk. In his Kala-Bhairav fierce form, he is offered blood and alcohol. The Goddess is associated with nature’s most elemental actions – sex and violence. She is offered blood. In Varahi temples of Odisha, she eats fish. Yet, many Goddess temples where she is closely associated with Vishnu, she is vegetarian: as in Kolhapur Amba-bai temple in Maharasthra, or the Goddess on the Hills of Punjab and Jammu. So again, no fixed rule, even for the gods.

Some people equate vegetarianism with ahimsa or non-violence. Ahimsa is a fundamental principle of Jainism and yoga. However, ahima is a very complex idea. It means not hurting any living creature in body (tann) or mind (mann). But this does not extend to the act of eating. For all the quest for food involves violence. Farming is a very violent activity involving the killing of many animals, not least the pests. Also ahimsa is closely linked to anekantavada, or plurality, and aparigraha, not clinging to any thing or thought, and to syada-vada, embracing uncertainty. Many soldiers are vegetarian. Many corrupt politicians and crony capitalists who destroy the ecosystem with their industries or exploit workers in their factories are vegetarian. That is hardly non-violence! Many hermits give up meat to become spiritually pure. They have linked meat and blood to contamination. This is a dangerous idea: it forms the idea of “untouchability” that renders certain people “unclean” based on their traditional vocation which brings them in contact with flesh and blood. Turning “blood” into contamination is the reason why women are seen as “unclean” during periods and at the time of delivery. This disdain for blood as part of ritual purity fuels prejudice of the worst kind. We must be wary of it. Many vegetarian hermits think they are superior to meat-eating householders. This competition reveals delusion created by the ego. We must be wary of it. We must keep reminding ourselves how the Goddess Kali demands blood sacrifice. Does it make the goddess impure? Nature cannot be made impure and all of nature is the Goddess.

Many Hindu supremacists are trying to reframe Hinduism using Abrahamic templates, and so are trying to deny Hindu pluralism. They want to create a checklist of Hindu behaviours. They assume the practice of some dominant Brahmin and trading (Bania) communities as universal. They see “non-vegetarian” as inferior and “vegetarian” as more evolved, a belief that is less scientific and more designed to massage the ego. They deny the meat-eating practices of various non-dominant communities. We must not forget that as per food census, 70 per cent of India eats meat in some form or the other. We must not forget that Hinduism is not what some Brahmins and Banias decide it is, or should be. Brahminism is but a tiny subset of Hinduism, and not all Brahmins are vegetarian.