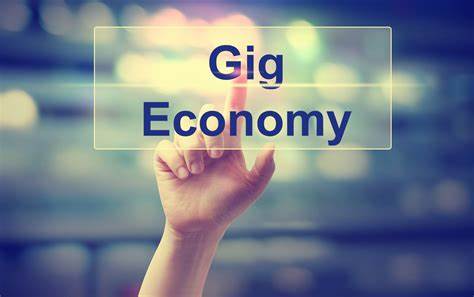 A gendered lens is important when collecting data on gig workers.

The panel was a follow-up discussion in relation to a policy brief titled Engendering the Gig Economy in India published by ISST. The gig economy here is referring to labour market activities which are coordinated through digital platforms. These include freelance work, on-demand work and part-time work. Most of these jobs are seen as non-standard forms of employment. This non-standard employment includes contractual work which uses the digital platform as an intermediary. Here we notice a blurring of the line between self-employment and dependent employment.

Post this, researchers from ISST, Anweshaa Ghosh, Risha Ramachandran and Mubashira Zaidi spoke about their policy brief and its findings. The panel discussed many aspects that impact women workers in the gig economy. They looked at platform-based employment, the skills developed in the gig economy, the working conditions and the collectivization of women workers, among others. In the kind of skill developed through these employment opportunities it was noticed that there was a focus on grooming and soft skills or on emotional labour. Many women who were employed in cab driving faced challenges pertaining to learning to drive and even getting the permission of the family in order to drive. Government sponsored training programs seemed insufficient in providing quality training in a competitive market. Further women in the gig work economy face challenges because of the unpaid care work they have to put in both at their homes and workplaces, the lack of access to resources, restriction on mobility, lack of job opportunities, etc. In such scenarios collectivization is also not possible for gig workers who do not have shared, uniform spaces for interaction as workers. There is a certain alienation from their co-workers. The invisibility of the management in these platform-based companies also impacts the women workers’ bargaining powers.

During the COVID-19 pandemic many gig workers have faced fall in wages and commissions and many women had to migrate back to their hometowns due to the lack of work. Many of them also faced harassment by the police while delivering their services in areas with partial lockdown.

Aayush Rathi and Ambika Tandon spoke about the typologies and design of the platforms for domestic care work. Platform-based employment also leads to certain discrimination and surveillance which become major causes of worry as far as individual rights are concerned. Amrita Gupta from Non Traditional Livelihoods Network spoke on why there is a need then to have an intersectional approach to gig economy workers. A gendered lens is important when collecting data on gig workers. They also need to be recognised as ‘employees’ rather than as ‘independent contractors’ which might allow for more flexibility but less security. Unionization within the gig economy becomes important because of the unorganised nature of worker relationships. This would ensure inclusion of different workers and their specific needs while ensuring a basic structure of healthy working conditions that guarantee safety and wellbeing.

: Isheeta is a features writer and a student of Gender Studies at Ambedkar University, Delhi. She enjoys dissecting popular culture through a gendered lens, adding new books to her overflowing book rack and sipping coffee in quiet corners. She is currently an Intern at Kractivist.org.

Why is India's wealth inequality growing so rapidly?
Failing to set up an IC to protect against Sexual Harassment can lead to Penalties
Press Release- Civil Society rejects Tehelka's response as dishonest #Vaw
Maharashtra's slum rehab scheme is a gold mine for builders