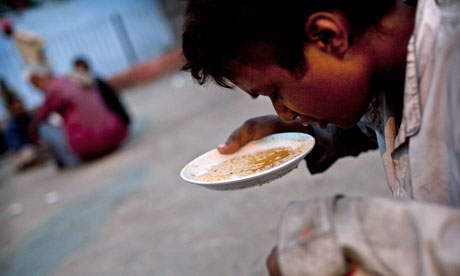 An Indian boy eats food distributed by a charity outside a temple in Delhi. Photograph: Kevin Frayer/AP

Human rights are the most powerful tool to ensure efforts against hungerand malnutrition tackle structural causes and are not reduced to short-term strategies, civil society groups said in a report published on Tuesday.

Who Decides About Global Food and Nutrition? – Strategies to Regain Control argues that it is impossible to combat the causes of hunger while keeping existing power relations untouched.

“Food and power are related. It is almost impossible to find one person among the powerful in society and politics worldwide who does not have enough to eat,” said Huguette Akplogan-Dossa, regional co-ordinator of the African Network on the Right to Food (ANoRF). “The tendency is for exclusion from economic and political decision-making to go hand in hand with incidences of hunger and malnutrition.”

The report expresses particular concern about the increasing influence and control of agribusinesses and financial companies over food and nutrition.

“Far too often, agribusinesses and nutrition companies use their weight and influence to increase their profit margins, and to manipulate the rules to their interests and convenience, without regard for the best interests of small-scale food producers and the survival of their communities – let alone the moral and legal requirements of the human right to food,” said Peter Prove, executive director of the Ecumenical Advocacy Alliance.

The report points to a faultline in how to deal with food security – access to safe and nutritious food. There is the “mainstream approach” favoured by governments and international organisations, such as Agra, Alliance for a Green Revolution in Africa, and backed by the Gates Foundation, which focuses on technocratic approaches – better seeds and technology – to boost productivity and access to markets. This week, Agra is holding a forum in Arusha, Tanzania, on plans for developing Africa’s agricultural sector.

However, the civil society groups behind the fifth annual report on the right to food and nutrition put the emphasis on a rights-based approach. They say an agricultural system that features large US and EU farm subsidies, along with a concentration of power among a few grain giants such as ADM, Cargill and Bunge (the main corporate beneficiaries of US food aid), contribute to food insecurity in poor countries.

“Allowing decision-making to be in the hands of a powerful but reduced group has led to a centralised model of food supply, which in many cases results in famines, political abuse, or infringement on the state’s basic obligations when it comes to human rights: to respect, protect and fulfil them,” the report says.

The report sees negative corporate influence at work in the Scaling Up Nutrition (Sun) initiative, involving a $2.9bn plan to promote good nutritional practices with $6.2bn on preventing and treating malnutrition with special foods. Backed by the UN, the scheme has the support ofGain, the Global Alliance for Improved Nutrition. Gain’s partners include food giants such as PepsiCo, Kraft and Danone.

The UN special rapporteur on the right to food, Olivier de Schutter, while welcoming the progress on Sun, has pointed out how the private sector tries to use technical solutions for what are fundamentally social problems. De Schutter has called on countries committed to scaling up nutrition to begin by regulating the marketing of commercial infant formula and other breast-milk substitutes. He has also noted the tension between a strategy that promotes processed foods, enriched with nutrients to the point that diets become “medicalised”, and one that promotes local and regional food systems, as well as a shift towards less heavily processed and more nutritious food.

A chapter in the report, written by Marcos Arana Cedeño and Xaviera Cabada, cites the vigorous promotion of soft drinks on school premises in Mexico by companies – endorsed by many school authorities, which provide space for sales and advertising in exchange for school supplies or financial benefits. They note the serious problems in Mexico’s regions with large indigenous populations, where obesity rates are growing faster within the poorest quintile.

“It is precisely in these indigenous regions where the most aggressive and unregulated marketing practices of sweetened soft drinks take place,” the authors write. These practices include a 35% price cut, promotion in Spanish and indigenous languages, and numerous sales outlets within and around schools.

Civil society groups are making themselves heard on the issues surrounding food security and hunger. After years of negotiations involving governments, international organisations and civil society groups under the UN’s Committee on World Food Security. The body officially endorsed the voluntary guidelines on the responsible governance of tenure of land, fisheries and forests in the context of national food security.

The guidelines promote secure tenure rights and equitable access to land, fisheries and forests as a means of eradicating hunger and poverty, supporting sustainable development and enhancing the environment. They contain provisions to protect local communities, indigenous peoples and vulnerable groups from land speculation and land concentration.

“With the reform of the Committee on World Food Security, an innovative way of inclusive governance has been established. It has been a breakthrough for those civil society groups that traditionally have been excluded from decision-making processes on all levels,” said Flavio Valente, secretary general of advocacy group Fian Internationa