IIT- Bombay , Sexism, and the Failure of ‘Due Process’ #Vaw

At IIT-Bombay, your day starts with casual sexism and ends with chauvinism
MAITREYEE SHUKLA
At IIT- B, your day starts with casual sexism and ends with chauvinism, punctuated only by moral policing. I remember, at my orientation that happened a few months ago, we were shown a video about life at IIT. The video started with peppy music and a map of IIT-B on the screen. A little dot starts moving from the main gate, going inside the campus it crosses a hostel- a girls’ hostel- comes back, whistles in front of the hostel, and moves on.
In the presence of the Dean, faculty members, and the entire Women’s Cell, this pathetically sexist thing happened, and no one winced. I heard a few laughs, and it was clear that from the moment you enter the campus, you submit to the male gaze and give in to institutionally sanctioned sexism. Our orientation into the culture of IIT had begun.
Like every other technical institute in the country, IIT’s gender ratio is terribly skewed; so much that out of 16 hostels, only 3 are for women. This domination of men in public spaces itself limits the accessibility for women. Besides, the absence of any autonomous sensitizing body such as GSCASH means that the majority of men remain oblivious to the sexist overtones in their behavior. Although, in all fairness, IIT does have a Women’s Cell which is supposed to tackle issues of harassment and gender sensitivity.
However, their attempts at doing the same remain limited to one presentation followed by pamphlet distribution at the beginning of the academic year.
The sexism of IIT reaches its peak during its festivals. Mood Indigo, apart from the incredibly objectifying performances catering to the male gaze, is known for the ‘Hariyali’ (literally, greenry), IIT’s lingo for the lush crop of women it hosts during the fest. For IIT-B’s annual dance festival, AIDS, the entire campus is plastered with posters saying “Chalti hai kya Hostel se Convo” and “Basanti in kutton ke saamne zaroor naachna”. 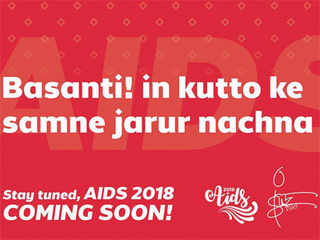 What’s even more disturbing is that they are on full display, online and offline, and even fluttering obnoxiously right in front of the girls’ hostels despite strict regulations on posters inside the campus. Recently a group of students who pasted some posters about importance of democratic elections in campus received a mail from the dean, telling them to stop defacing the campus. In a campus where a few handwritten posters are closely monitored, open display of these posters clearly implies that they have institutional sanction. The girls’ hostel councils are yet to express any concern over this.
Sadly, it appears that even the Women’s Cell is either not bothered by these posters, or it is not within its powers to take any action against them. It’s important to clarify here that before making these claims, I tried to interview the conveners of the Women’s Cell, however, they are yet to reply to the mail seeking an appointment.
Its also worth noting that the website of Women’s Cell hasn’t been updated since long. The contact details given are of conveners who have finished their tenure and the last annual report available is that of 2014.
Power and privilege provided with apathetic institutional mechanisms in IIT force victims into silence. Generally, I have seen that women advice each other to not go to the Women’s Cell for complaints regarding issues such as catcalling, indecent remarks, stalking or unsolicited sexual advances because the Women’s Cell is known to either dismiss them as non issues or demand viable proof.
As per the annual report of 2014, the Women’s Cell considered only five complaints. Out of which, in a case against a faculty member by a student, no action was taken because “the complaint was made after six months”. The scary truth hits you in the face. The ‘due process’ crusaders, while wagging their fingers at us for putting careers and reputations at risk, were in fact protecting this very power structure.
As a result of the larger feminist movement and certain policy changes, instances of violent sexual abuse have been controlled to a certain extent, but they do not ensure absolute eradication of sexism. IIT is failing at protecting its women from it. If not in the form of violence, it manifests itself in the form of micro- aggressions, moral policing and casual sexism.
It shows in the rape jokes you overhear, in the friendly advices to take it as a compliment, in the look men exchange when a woman passes, in the way the security guards look at you when you take a male guest to your room, in all the jokes about women’s inability to do science, in the way men pursue you until you say that you have a boyfriend, because let’s face it, they won’t acknowledge your agency but they’ll sure as hell respect another man’s territory.
These trivialized micro- aggressions coupled with institutional sanctions act as a silencer for women and alienate us further from the public space of the institute. The classrooms of IIT, with their bro- culture, casual sexist banter, and ignorance towards male privilege create a generation of liberal, ‘woke’ men who are all for ‘equality’ but think of feminism as the worst F word ever. The men who feel entitled to our time, space and bodies simply because they were nice enough to not be an outright predator.
These things seem harmless by themselves, probably that’s why we let them slide. But the harms of ingrained sexism are multi layered. To begin with, women who reach institutes of higher educations- to reduce it to very simple terms- get there by overcoming gender, caste and class barriers. These practices push these women to margins in spaces which, ironically, are supposed to be sites for empowerment. Against the general perception that casual lad- banter is something unrelated to violent sexual assault and harassment, they are highly interdependent. Casual sexism provides legitimacy and normalcy to to sexual assault, and in fact, it often directly leads to assault.
Which is why combating this culture becomes imperative.
While mechanism like GSCASH, workshops or seminars for sensitization are obvious requirements, women of this campus need to take the reins and assert themselves. We should let go of the fear of alienation and call out our friends over their sexist jokes. One genuine ally is anyway more valuable than any number of sexist friends. Let’s define our own boundaries and never shy from seeking a safe space for ourselves.
We should never stop looking out for each other, and warning other women about sexual predators is the best way to do so. We have to own our agency, and most importantly, know that we don’t owe our time, space and bodies to anyone.
Let’s refuse to get oriented into the ‘culture’ of IIT.
Let’s reclaim our campus.