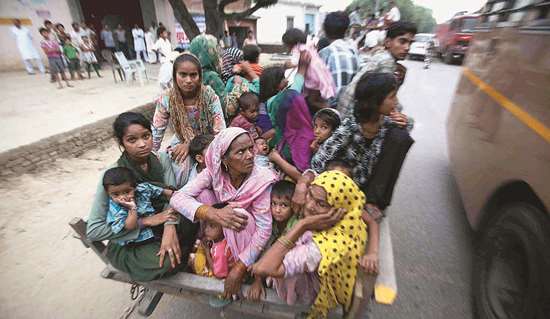 Pawns in a game Muzaffarnagar victims
Cobrapost Investigation
Working Out The Riot Math
From setting off a bomb to creating panic, it’s all fixed, Outlook Magazine

How do you engineer a riot digitally? Ask Bipin Pathare, who runs Om Consultancy Service in Andheri East, Mumbai. Pathare tells Cobrapost’s undercover camera that he has “designed” software which gives access to boothwise data of voters, according to their language, region and religion, so as to approach them differently. As an example, he shows us details about Adiba, Booth No. 112, in Mumbai, saying, “So if you want to see how many voters there are in Booth No. 112…yes, there are 1,141 voters.” Negative propaga­nda against Netaji’s opponent is “the right strategy”, says Pathare, “this is what we manage fully”. He is nonchalant as he claims to have helped one Praveen Jara win an election using intimidation against a particular community, by detonating a crude bomb in their locality. “Praveen Jara won here…. There were some Muslim votes in a locality, and we knew Muslims would not cast their vote in his favour. There were 60 per cent Muslim votes. You know what we did? We created a riot, exploded a little hand-bomb taking help from their own fellows. No one among their community ventured out. Their 60 per cent vote was secured thus…we have all these kinds of strategy.”

The detailed data with Pathare outlines exactly who lives where. This is useful if somebody wants to spread a rumour or stop the minority voters from venturing out on polling day. “Yes,” says Pathare, “this helps us know how many Muslims live on which road. We have to set an atmosphere so that they don’t enter in the area, that there is some disturbance. Our men will have to spread a rumour that there is some disturbance out there so they don’t venture out.” He also offers the routine service—to design a server overseas for negative publicity and send out smses. “And, no, nobody will be able to find out my server,” he assures us.