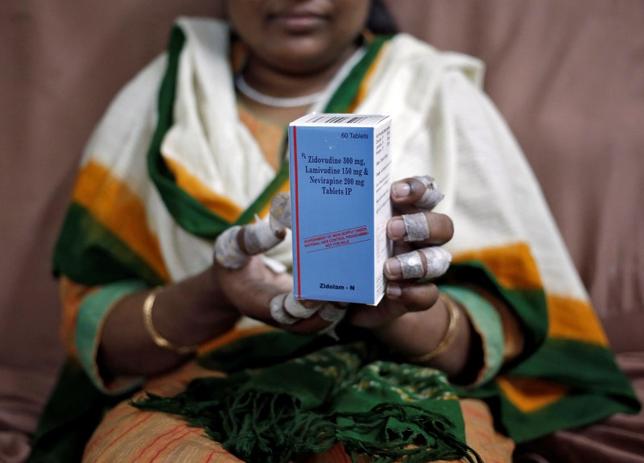 A patient displays a bottle of medicine at an office of HIV/AIDS activists in New Delhi in this file photo dated October 13, 2014.
REUTERS/ANINDITO MUKHERJEE

India is dismissing dozens of foreign-funded health experts working inside the government, a move seen as part of a broader clampdown on the influence of non-government organisations (NGOs) on public policy.

The loss of these professionals, most of whom are Indian nationals, has raised concern that signature programmes to combat HIV/AIDS and tuberculosis may suffer just as they face funding shortages due to slow bureaucracy.

A shortage of technical experts has for years forced India to turn to the World Health Organization (WHO) and aid groups like the Bill & Melinda Gates Foundation to manage large-scale public health schemes.

Of the nearly 140 people who run India’s HIV/AIDS programme, 112 are consultants seconded from foreign organisations. Some are engaged in planning and monitoring of prevention activities in high-risk Indian states.

Last week, Prime Minister Narendra Modi‘s government ordered 45 of them to be removed from service by June as they had served more than three years, according to health ministry officials and a document seen by Reuters.

By December, 70 of these experts will leave, while others, who have worked for less than three years, face a government screening committee to decide whether they are still needed.

“It’s like questioning our integrity just because we are foreign-funded,” said an HIV/AIDS consultant who worked in the health department for three years and is now looking for a job.

Two other finance ministry officials said the move was driven by fears that foreign agencies could use their consultants to influence policy in New Delhi. “Their loyalties would be divided,” said one of the officials.

Security of information was also a concern, the other official said.

More than 500 consultants work across the Indian government, about half in the health sector alone. Some are from Britain’s Department for International Development (DFID) and the United Nations agency UNICEF.

A spokeswoman for the Bill & Melinda Gates Foundation did not comment on the government’s decision, but said it would adhere to the directive. A DFID spokesman said the department had “not received any complaints from the government of India about data theft or undue influence on policies.”

The WHO’s India office said it had not been approached by the government. “We are aware of the matter. It is too early for us to comment on how it may impact our work,” Henk Bekedam, WHO’s India representative, told Reuters on Tuesday.

UNICEF did not respond to a request for comment.

The move against consultants employed by government departments but who get their salaries from their parent organisations comes at a time when the government has tightened controls on foreign NGOs operating in India.

Last year it froze funding and cancelled licences of thousands of non-profit organisations for not declaring international donations. The government said it was seeking to bring transparency to the functioning of these entities.

The new rules apply only to government workers financed by global aid agencies, and not to all those associated with international groups.

A senior government source said the new policy on consultants working in the government would help streamline the older, loosely regulated system and ensure they have proper approvals.

Nearly 70 experienced consultants in the tuberculosis programme risk losing their jobs following the government order. India accounts for almost a quarter of global TB cases and the most deaths – 220,000 in 2014.

Keshav Desiraju, a former health secretary, said consultants play a vital role in running public health schemes but are not involved in policy formulation. “Consultants do a lot of data work, and it will be immature to suggest they can influence government policy,” he told Reuters.