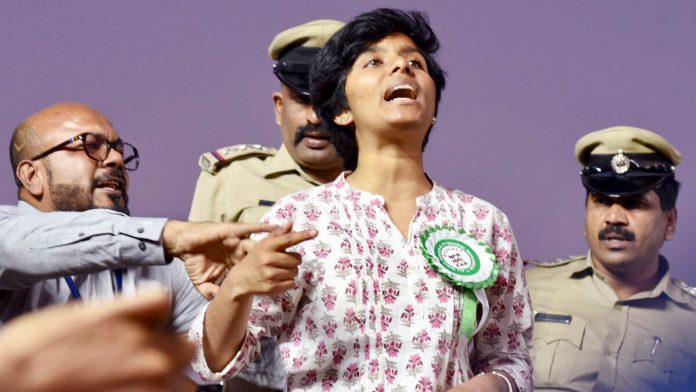 Last week, 19-year-old Amulya Leona Noronha was arrested for sedition for saying, ‘Pakistan Zindabad’, at a rally against the Citizenship (Amendment) Act and National Register of Citizens (NCR) in Bengaluru. Her own father and the rally organisers disowned her views and apologised for her ‘unpatriotic’ language. Amulya’s family house at Shivapura in Karnataka was vandalised by a right-wing mob.

Alas, she has, in effect, been figuratively lynched by a mob uninterested in hearing her, proving her guilt, or resisting the outrageous current fashion of calling all dissent treason. Here is what Amulya wrote in Kannada on Facebook on February 16, shortly before her arrest. Her friends say she sought to repeat these words at the rally but was shouted down and arrested.

Whichever country it is — zindabad to all countries.

You teach the children that nation is its soil. We children are telling you — nation means it is its people. All people should get their basic facilities. All of them should be able to avail their fundamental rights. Governments should take care of the people of these countries. Zindabad to everyone who serve the people.’ Please join me in applauding Amulya’s wonderful sentiments! How well a 19-year-old girl has cut through today’s miasma of hate and suspicion to ask all countries to empower their people to assert their fundamental rights, and to wish long life — zindabad — for all those that do. There is nothing remotely treasonable or seditious in this, nothing that stokes violence or hate.

Tactically, she erred in starting with Pakistan instead of putting it later in her ‘zindabad’ list. But this is no reason for politicians, TV channels and social media to metaphorically lynch her.

The police say they are investigating her possible links to Maoists insurrections. I suspect this is the usual twaddle to justify arbitrary arrest. Even if she has Marxist leanings, so do millions of other youngsters. The world over, youngsters have long been seduced by Marxism’s promise of a popular revolt against oppressors. I have battled Marxism most of my life. When the Soviet Union collapsed, I called Indian Marxists lifelong supporters of murder and torture in pursuit of a bankrupt ideology. Yet, I defended to the hilt their freedom to express their dubious views. Student agitators galore have evolved into solidly middle-class professionals. So, it is ridiculous to treat their youthful revolutionary rhetoric as a national security threat.

‘Urban Naxals’ are even more contemptuous of Pakistan’s quasi-military authoritarianism than of Indian democracy. To accuse anybody who says ‘Pakistan Zindabad’ of also being an ‘UrbanNaxal’ is a farcical self-contradiction.

Go one step further. How can wishing any country a long life be sedition? India’s sedition law was enacted by the British raj to suppress any Indian dissent. This colonial relic cries out for abolition.

The Supreme Court has repeatedly declared that this law must be used only in really serious situations. In the 1995 Balwant Singh case verdict, the court said, ‘The casual raising of slogans once or twice by two individuals alone cannot be said to be aimed at exciting or attempt to excite hatred or disaffection towards the government… Section 124A IPC (the sedition law), would in the circumstances of the case have no application whatsoever.’ Saying ‘Pakistan Zindabad’ does not, in any way, call for the violent overthrow of the Indian State. ‘Zindabad’ merely means ‘long live’, an expression of goodwill that can surely be extended to all countries, including those India has serious problems with. The US and Britain supported Pakistan for years on the Kashmir issue. At that time, would saying ‘USA Zindabad’ or ‘Britain Zindabad’ have been grounds for arrest? Absolutely not.

Some view Pakistan as a mortal foe with whom friendly relations are impossible. Others in both countries think bridges can be built and wish to keep doors open and dialogues going. Peaceniks on both sides may be naïve, but those from Pakistan saying ‘Hindustan Zindabad’ and those from India saying ‘Pakistan Zindabad’ are really aiming for peace. And that is not sedition.

France and Germany fought three successive wars — the Franco-Prussian War in 1870, World War 1 in 1914-19, and World War 2 in 1939-45. But after the mayhem, peacemakers in France and Germany were determined to replace the ‘murdabad’ approach by a ‘zindabad’ one, developing such close interlinkages that another war would become impossible. The peacemakers were not arrested for sedition. They are now revered as among the greatest statesmen in history.

Jesus Christ taught that it is not enough to love your friends. You must also love your enemies. Had he preached his gospel in India today, he could been arrested for sedition, amidst applause from the viewers of many a television news channel.

Ask him about being ‘seditious’: ‘Lokmanya’ Bal Gangadhar Tilak