India – The Bizarre Story of Aadhaar and EVMs 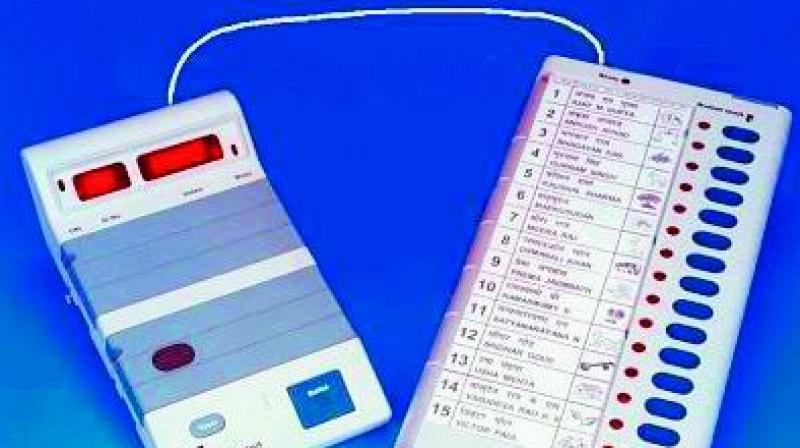 NEW DELHI: The Election Commission of India on its website has provided an answer to a question about the “system of numbering EVMs”.

It states “Each Control Unit has a unique ID Number (UID), which is painted on each unit with a permanent marker. This ID Number will be allowed to be noted by the Polling Agents and will also be recorded in a Register maintained for the purpose by the Returning Officer. The address tag attached to the Control Unit also will indicate this ID Number.”

A careful perusal of UIDAI documents reveals that it is linked to the electoral database too. A confidential document of UIDAI titled ‘Creating a unique identity number for every resident in India’, leaked by Wikileaks on November 13, 2009 reads: “One way to ensure that the unique identification (UID) number is used by all government and private agencies is by inserting it into the birth certificate of the infant. Since the birth certificate is the original identity document, it is likely that this number will then persist as the key identifier through the individual’s various life events, such as joining school, immunizations, voting etc.”

The proponents of the world’s biggest citizen identification scheme aims to converge the electoral photo identity card (EPIC) numbers of electoral database, the UID/Aadhaar number database called Central Identities Data Repository (CIDR). In their myopia, political parties in particular and citizens in general have failed to fathom its ramifications for voting by electors in a democracy.

In a letter dated June 7 2011, the Director General and Mission Director of Unique Identification Authority of India (UIDAI) wrote to Chief Election Commissioner saying, “The Election Commission of India (ECI) may also like to leverage Aadhaar infrastructure in cleaning/ updating their existing electoral data base. Aadhaar numbers issued by the UIDAI can also be included in the list of valid proof of identity (POI) and proof of address (POA) documents of the Election Commission during the polls for identity verification.”

The file notings by ECI on the UIDAI’s letter reads: “How can Aadhaar number be used as proof of address”. The reply from ECI dated June 17, 2011 on the letter from UIDAI stated “Aadhaar numbers can be seeded into EPIC and electoral roll databases to clean those databases and also to bring standardisation and uniformity in the Election Commission’s databases across the country. UIDAI does provide necessary technical and financial support under its information and communications technology (ICT) infrastructure scheme for integration of Aadhaar number with database of concerned Ministries/ Departments to make them UID compliant. However, the process and schemes to use Aadhaar numbers for their applications are to be defined by the concerned Departments themselves.”

The notification of January 28, 2009 that set up UIDAI, provides the terms of reference (TOR) for its work. There is no reference to the collation of UID number database with electoral database in the TOR. But the TOR does refer to “collation and correlation with UID and its partner databases.” If this reference to ‘partner database’ included the electoral database, the UID/ Aadhaar enrolment form never revealed it and took Indian residents for a ride.

UIDAI has argued, “Aadhaar database is restricted to the name, date of birth, gender, address, facial image, ten fingerprints and iris of the resident. The data fields are based on the recommendation of the Demographic and Data field Verification Committee headed by N Vittal, former chief vigilance commissioner (CVC). Since the Aadhaar database contains absolute minimum information of a resident necessary to establish identity, it is not possible to include EPIC numbers in the Aadhaar database. However, the ECI should seed Aadhaar numbers in the electoral database as clarified above.”

The Election Commission in its letter dated March 4, 2013 to UIDAI on the subject of “Seeding of Aadhaar number in Electoral Database” wrote: “Commission feels that it would be better that EPIC no. is collected at the time of enrollment for Aadhaar and put in the Aadhaar database…ECI has already issued instructions that Aadhaar cards can be used as alternative identity documents at polling station…It may be mentioned here that Ministry of Home Affairs has also agreed to print EPIC no. on smart card as issued by Registrar General of India…Under the circumstances, it is once again requested that EPIC no. may be made mandatory for enrollment in Aadhaar.”

In its letter dated 29 October 2012, the ECI had argued that “including EPIC no. as mandatory field in UIDAI database would enable better integration between UIDAI database and electoral database, which will make Aadhaar numbers more useful.” This enthusiastic endorsement of illegal UIDAI’s database and its inexplicable eagerness to merge EPIC no. and electoral database with a database that faces robust legal challenge merits rigorous scrutiny.

In a letter dated 16 April 2012, RK Singh, the then secretary, ministry of home affairs (MHA), currently MP from BJP wrote to Dr SY Quraishi, the then Chief Election Commissioner (CEC), with reference to latter’s letter dated 4 April 2012 “regarding inclusion of Electoral Photo Identity Card -EPIC number in the Aadhaar database.”

It is intriguing as to how Election Commission has failed to comprehend the adverse consequences of such convergence. There is nothing in the public domain to suggest that implications of such a merger have been examined.

The then secretary, MHA informed the CEC that there is mutual agreement between the MHA’s RGI and ECI that “there is a considerable potential to synchronise the two databases and set up a unified platform for future updating of the same and sought CEC’s advice to take it forward. Does the Election Commission realize that synchronization of the two databases is happening as per the design of Wipro’s document and is beyond the mandate given to UIDAI and RGI?

It may recalled that one of the earliest documents that refer UIDAI is a 14-page long document titled ‘Strategic Vision: Unique Identification of Residents’ prepared by Wipro Ltd for the Planning Commission envisaged the close linkage that the UIDAI’s Aadhaar would have with the electoral database. The use of electoral database mentioned in Wipro’s document remains on the agenda of the proponents of Aadhaar.

The reply of the Prime Minister’s Office (PMO) dated April 1. 2014 transferring the right to information (RTI) application to Election Commission seems to indicate that linkage of UIDAI with the Commission has already been established.

In such a backdrop, PMO’s reluctance to share all the file documents and correspondence relating to Nilekani and right up to his resignation appears quite sensitive and deserves scrutiny.

Nilekani referred to the current “three-member UIDAI Committee under J Satyanarayana, the former IT secretary”. Satyanarayana is currently a part time Chairman of UIDAI since September 6, 2016. He has been on the Board of NISG. Notably, Satyanarayana has been the member of the Task Force for preparation of the Policy Document on Identity and Access Management under National e-Governance Programme (NeGP).

This Task Force was constituted by Office Memorandum dated October 31, 2006, which was supposed to submit its report by December 25 2006. Coincidentally, the Processes Committee of the Planning Commission which was set up in July 2006 commissioned the task of preparing “Strategic Vision: Unique Identification of Residents” to Wipro Ltd during the same period.

This report talked about “Citizen Identities” and “Owner of identities”. This report states, “The Identity Information is stored by multiple agencies in multiple documents like Ration card, Driving License, Passport, Voter’s card, Birth Certificate etc. The purpose of the Project unique ID (UID) initiated by the Planning Commission is to create a central database of resident information and assign a Unique Identification number to each such resident (Citizens and Persons of Indian Origin) in the country….The appropriate Identity Aggregations and Synchronization should be used to integrate systems to share their identity information.”

This April 2007 report reveals that “National UID Project: This project has been initiated, with Voter ID Numbers and BPL households in the first instance.” It is evident that long before the arrival of Nilekani in July 2009 as Chairman of UIDAI, the UID/Aadhaar project was already unfolding. He just came and claimed credit for it. This report also discloses that each registered judicial court has a unique identification (UID) number at Sub ordinate Courts, High Court and Supreme Court. This effort seems to be part of profiling and surveillance of judicial institutions.

Given the fact that some 91,000 of USA’s classified pages reached the website of Wikileaks in August 2010 reveals that claims of security and privacy are mere empty claims with no privacy law in the country.

The Ministry of Planning, the nodal ministry for UID/aadhaar informed the Parliamentary Standing Committee that concerns sharing of data, surveillance and profiling is being addressed by a proposed legislation on privacy. The committee observed that the enactment of such data protection law is a “pre-requisite for any law that deals with large-scale collection of information from individuals and its linkages across separate databases.”

This promised law has not been enacted till date. Notably, till date there is no data protection and privacy protection law in the country. Thus, the claim of UIDAI and Nilekani remains a bogus claim.

Contrary to the claims of the promoters of biometric Unique Identification (UID)/Aadhaar like Nandan Nilekani that “Millions of people without any ID, now have an ID”, the fact is that of all the Aadhaar numbers issued to Indian residents till date – 99.97 per cent had pre-existing identification (ID) documents.

This has been revealed in a reply to an application under Right to Information (RTI) Act by Unique Identification Authority of India (UIDAI), Union Ministry of Electronics and Information Technology (MeitY).

The enclosed reply reveals that out of the 83.5 crore UID/Aadhaar numbers issued till then, only 2.19 lakh residents (0.03 per cent) have been given numbers based on the introduction by the introducer system because they did not have a pre-existing ID. This proves that that ‘an inability to prove identity” has not a major barrier to access benefits and subsidies.

Contrary to claims of the promoters of UID/Aadhaar about there being a cumulative saving of 50,000 crores that was being diverted from genuine beneficiaries, as per the minutes of the meeting of Committee of Secretaries (CoS) held under the Chairmanship of Cabinet Secretary on 23 November, 2015 on the subject of “Implementation of DBT in Government Schemes”, there was an annual subsidy saving of Rs 91 crore. DBT stands for Direct Benefits Transfer. The minutes of the meeting is dated November 30, 2015.

A bizarre situation is emerging where citizens chose a government that was supposed to represent them but their government is undertaking the task of coercively biometrically authenticating whether or not those it represents are indeed those who they claim to be. It ends up breaking the sacrosanct social contract between the citizen and the State in an unprecedented act of breach of trust. The attempt to undertake convergence of all the sensitive databases of Indians and the confidence of promoters of UID Aadhaar in the irreversibility of their efforts has thrown as yet an unmet open political challenge to the opposition parties and citizens.