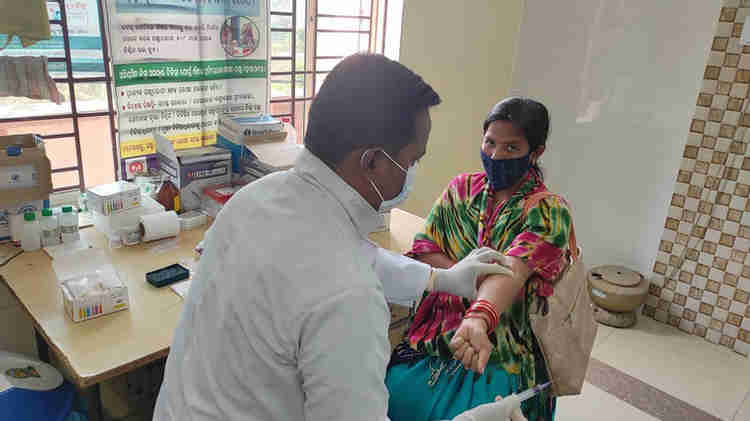 The Supreme Court said India’s current vaccine policy of registration via CoWIN will leave out ‘significant’ numbers of Indians. Our research shows 1.04 of 1.38 billion Indians don’t have smartphones, 685 million have no Internet access. Women, particularly in rural areas, are especially disadvantaged.

Varanasi: “A vaccination policy exclusively relying on a digital portal for vaccinating a significant population of this country between the ages of 18-44 years would be unable to meet its target of universal immunization owing to such a digital divide. It is the marginalized sections of the society who would bear the brunt of this accessibility barrier.”

This Supreme Court order of 31 May 2021 by a three-judge bench headed by Justice D Chandrachud said the use of CoWIN, an internet application, to organise India’s vaccination drive, could potentially imperil the constitutional right to equality and the right to health.

While Prime Minister Narendra Modi, responding apparently to widespread criticism of his government’s vaccine policy, announced major changes on 7 June after pressure from the Supreme Court, media and the opposition, he made no reference to reviewing the policy of booking a vaccination appointment only through the CoWIN app.

Our research, based on the latest available data, puts numbers to the “accessibility barrier” that the Court referred to: 1.04 billion of 1.38 billion Indians have no access to smartphones required to access the CoWIN app. Women are the most disadvantaged, with 86% (570 million) of India’s 663 million women without smartphones and 49% (325 million) without any kind of mobile phone. Just 34% of rural women have ever used the Internet.

The Supreme Court order was a recognition of frequent concerns (here, here, and here) that the effort to vaccinate about 1.3 billion Indians, which the central government has promised will be completed by December 2021, is unlikely to succeed unless we have in place a universal vaccination programme that is independent of internet access.

The CoWIN portal is built for an English-literate and internet-friendly population, posing a serious challenge to the country’s vaccination drive, experts have said.

Women Are Already Falling Behind In Vaccination

By 5 June 2021, 98.34 million men in India had received at least one dose of a Covid-19 vaccine, compared to 84.43 million women, according to cumulative vaccination data available on the CoWIN dashboard.

The female to male vaccination ratio in 29 states and union territories remained under 1, according to district-wise data till 3 June. In these regions, for every 10 men, the number of women vaccinated was found to vary between 6 and 9, as per the Centre for Economic Data and Analysis, Ashoka University. Only seven states—Kerala, Karnataka, Chhattisgarh, Himachal Pradesh, Uttarakhand, Meghalaya, and Telangana—had vaccinated more women than men.

By 5 June, 3.3% of Indians were fully vaccinated while 13% had received one dose, according to Our World in Data. By comparison, 42% of those in the US, 40.2% in the UK, 10.7% in Brazil, and 0.8% in South Africa had been fully vaccinated. By this Bloomberg estimation, at the current pace, no more than 75% of India’s population will be vaccinated by April 2024, leaving the country vulnerable to more waves of Covid-19 infection.

The Supreme Court order was based primarily on data about the number of households that had computer and internet connections from the National Statistics Office and on wireless subscription to internet data from the Telecom Regulatory Authority of India. These data sources reveal that digital access in India is sharply divided along gender lines.

While these data alone are enough to raise questions over the accessibility of vaccines to women and whether accurate, scientific information is available to dispel fears, the statistic worsens when the urban-rural divergence is factored in.

The CoWIN dashboard does not yet carry the number of men and women vaccinated in urban and rural areas separately. However, data and reportage by various media indicate that vaccination rates in rural areas are much lower than in urban india.

Moreover, the spread of rumours and the lack of information in many rural districts has led to some of India’s highest rates of seropositivity, or infection levels, and high levels of vaccine hesitancy.

An Internet-dependent approach to vaccination brings into question the government’s plan to deal with future outbreaks of potentially more contagious variants in rural areas where there is little to no healthcare infrastructure—a risk that has been pointed out by health experts repeatedly (here, here, and here).

Of greater concern, said experts, was the fact that the government does not appear to have a plan to reach millions without a smartphone or Internet access.

The solution that solicitor general Tushar Mehta offered before the Supreme Court on behalf of the government was that those without internet access could seek help from NGOs and Internet-access points for government services at Common Service Centres (CSC) in villages to book slots. This solution was echoed by R S Sharma, chief executive officer of the National Health Authority and CoWIN.

“All common service centres are being activated and partnering with us to book slots, registration of people in rural areas,” said Sharma. “People can come at (sic) panchayat headquarters and get themselves registered for the vaccine.”

But, as the Supreme Court noted in its 31 May order, while referring to the annual report for CSCs for 2019-20, at least 13,000 or 5% of gram panchayats in India do not have a CSC that can provide Internet access for those unable to register through personal devices.

Other issues related to CSCs include slow Internet connectivity, low awareness of their existence and time and travel costs to reach these centres, and no guarantee that a request will be fulfilled.

“Our years of experience working with underserved communities informs [us] that people have to often visit CSCs multiple times to get even basic things like a death certificate,” said Osama Manzar, a founding member of the Digital Empowerment Foundation (DEF), an advocacy group that works to empower marginalized communities, so they can access, consume and produce information online.

While the Internet can now be accessed on most feature phones, Internet use is typically much more efficient and regular on smartphones. This makes men more likely to be able to use a platform such as CoWIN to register for vaccines or download the vaccination certificate.

Even if Internet use was to be considered more broadly and not only through mobile phones, the gap between the worst-served section, which is rural women, and the best served, urban men, is substantial.

Only 34% of rural women had ever used the Internet, according to the National Family Health Survey released in December 2020. The figure was 55% for rural men, 56% for urban women, and 73% for urban men.

The GSMA report says women are 51% less likely to use the Internet than men in South Asia. The women surveyed cited affordability as the most important reason for not accessing the Internet.

Looking at the data for smartphone ownership is important because it indicates the degree of autonomy in decision-making as well as familiarity with technology.

The GSMA report found that 90% of men who owned smartphones in India purchased their own devices, while the figure was 63% for women. This lack of financial autonomy and, consequently, control over devices also impacts Internet access, because of the strong link between smartphone ownership and digital inclusion.

“So, all the decisions, like when to use the smartphone, for what purpose, is often dictated by the patriarchal head,” Manzar said.

Rural Women Use, Know About Internet The Least

Gaining access to the Internet does not ensure that women are able to use it optimally.

Familiarity and knowledge are equally important to understand why rural women as a demographic lag behind the rest of the country when it comes to internet usage, experts have said.

India has the world’s widest gender disparity in mobile phone usage. According to the GSMA report, men tend to have wider uses for their mobile phones—to make calls, check emails, watch a video—than women, who tend to use their phones for more basic functions, such as making calls and sending texts.

So, government campaigns targeted at spreading awareness about the vaccine are more likely to reach men than women, a significant fact at a time when the pandemic has restricted physical movement and much of government messaging is carried through the Internet.

In the absence of targeted messaging aimed at reaching those without scientific know-how or media reportage, fears about vaccines are more likely to increase vaccine hesitancy in women, compared to men, especially among those at high risk of infection, such as pregnant women or lactating mothers.

The Impact Of The Technology Divide

As for the government solution to bridge the digital gender divide, even where there are CSCs, mobility for rural women is a concern, as are tardy responses at the centres themselves and the ability of women to find the time to travel.

Women in India spend 352 minutes a day on average on unpaid domestic work, relative to 52 minutes spent by men—a difference of 577%, with the divide much steeper in rural India, according to 2019 data from an Organisation for Economic Co-operation and Development survey.

Finding the time to travel to first register and then go for vaccination is more difficult for rural women than it is for men.

For instance, the CSC in Babita’s village Beema, in Nuh, near Mewat has a working Internet, but she said that getting women to take the Covid-19 vaccine was harder than other immunisation campaigns that she has been a part of, because while men only needed to be convinced to make a trip to the CSC, it was not so simple in the case of women.

“Women say that they will need male members of the family to accompany them, and taking out the time to make the trip is often difficult for them, given everyday chores,” said Babita, adding that women also explain how if they had side effects, there would be no one to look after children and home.

“Some even protest that they barely leave the house anyway, and so they do not require the vaccine,” said Babita. “We need vaccination drives with on-the-spot registration in every village so that some of these issues can be solved.”

“For women to step out, either for registration or vaccine, is altogether a mammoth task,” said Manzar. “This is because they not only have to take permission from the male members of the family, they also have to be accompanied by men for travelling.”

While local officers and grassroots health workers try to increase awareness, detailed district plans and the social mobilization necessary for reaching vaccination to underserved populations, such as rural women, are currently missing.

(Shubhangi Tiwari is a student of political science at Ashoka University and an intern at Article 14.)