Kerala: Into the wild to attend online classes 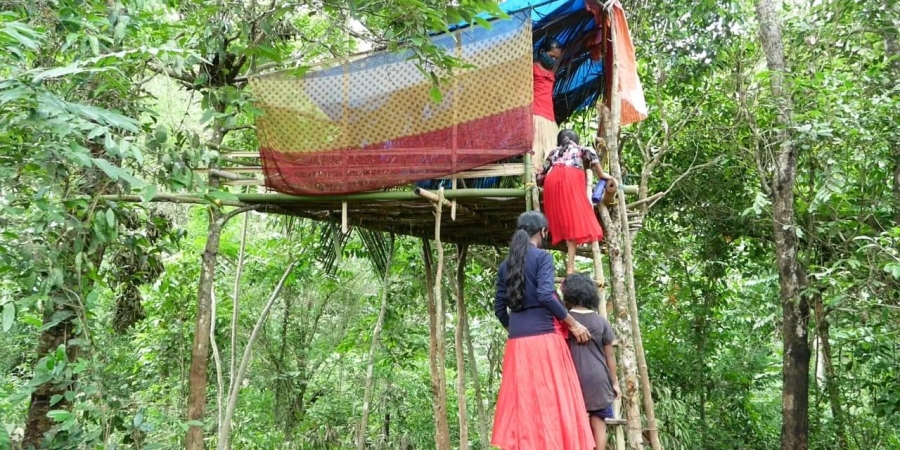 The aim is to climb atop the temporary tree houses (erumadom) parents have built for their children in the forest because that is the only way to get internet connectivity and attend classes.

KANNUR: Around half an hour ahead of their scheduled online classes, around 70 students of Panniyode tribal colony near Kannavam take their books and start their daily walk to the forest nearby.

The parents tag along as the group treads the forest fearing for their lives, with the threat of wild animals looming large.

“Some of us had to stop going for work to protect our kids,” said Preetha Sajeevan, 39, mother of Anjana and Thanmaya. “The path can be dangerous because there is no proper road leading to the forest. We have to find our own ways to get to the place where the treehouses are being set up,” she said.

Despite all these efforts, however, network issues persist even inside the erumadom, she pointed out. “But it is still far better up there.”

Last year, the families had taken up the issue with the tribal officer in charge of the colony. “He made arrangements for a teacher to come and conduct classes for the students. But this too stopped soon and nobody cared to enquire after it. This year, nobody has taken any initiative to help our kids so far,” Preetha said. There are 170 houses in the colony, in which people belonging to the Kurichiya tribe live.

“As of now, the situation is manageable. But once the monsoon gathers strength, the situation will become too difficult for us,” said Usha P R, 42, another woman from the colony. Besides those in Panniyode, some other colonies in the neighbourhood have also set up erumadoms in the forest to facilitate a study space for their kids. “We have heard that people of Poozhiyode and Chennappoyil colonies have also set up tree houses,” she said.

Meanwhile, District Collector T V Subhash said it was the administration’s immediate priority to resolve the issues faced by students while attending online classes. “These students’ problems will be addressed as an emergency case. I will see to it that the issue is resolved at the earliest,” he said.

The collector said he would ensure that the students have necessary gadgets as well. “I am looking into these issues, case by case,” he said, further stating that the district administration would consider opening up a common facility centre in the colony for the benefit of the people in Panniyode.