Media Trial: Stooges of the Establishment target Teesta Setalvad yet again, peddle canards in the name of Debate

This is a response to the bile spread by an electronic channel that claims for itself the label of ‘independent journalism’. Specifically the ‘The News Hour’ Farce of  Times Now on Monday night. 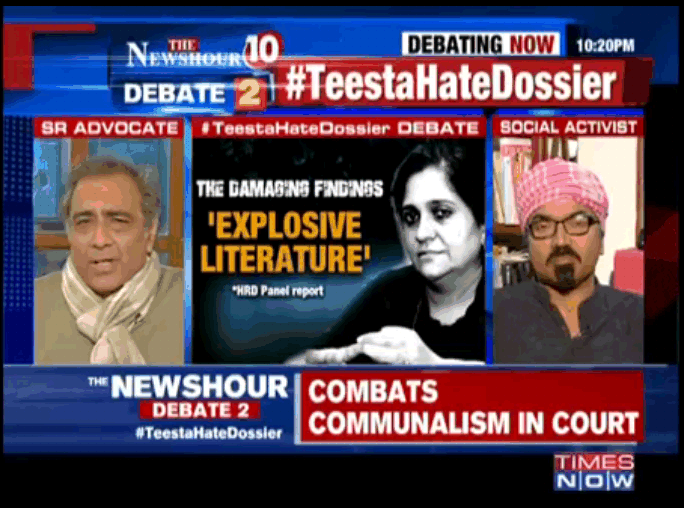 All of us at Sabrang Trust and I personally would like to emphatically refute the bilious allegations that we believe are being spun or flung from the very highest echelons of the government at me/us. We also find it pitiable that journalists and channels are playing the role of echo masters of the regime.

The work that the KHOJ project has been involved in, since the 1990s, deals with the crucial issues of incorporating the Indian constitutional vision into the school curriculum and through teacher training manuals and workshops. The work that was possible through the grant from the MHRD between 2010-2014 was but an extension of the dedicated work being undertaken by the KHOJ team, with eminent historians, for close to three decades. To label our work as ‘hate mongering’ is pathetic, given especially that senior and prominent persons in this government, cabinet and also Members of Parliament have used hate speech and hate writing as tools to divide the Indian population while occupying prominent positions in government and Parliament since 2014.

At the outset, we would like to state that we express our serious concern over being asked to respond to allegations against Sabrang Trust/Teesta Setalvad supposedly based on a report prepared by an MHRD panel which we have yet to see (The Bari Committee Report).

We question the professional ethics of a section of the media which expects responses from us to the report’s alleged findings but is unwilling to share the full report with us.

In October 2016 another news channel, NewsX indulged in a similar exercise, today it is Times Now. Both electronic channels had copies of the report which ironically is not available in the public domain.

Following intermittent and threatening media reports of the possibility of yet another false criminal complaint against me, this time instigated by senior echelons of the government, I, Teesta Setalvad had written to the Minister for Human Resources Development (MHRD) Mr Prakash Javdekar, on the issue (attached here is a scanned copy of the letter). Unfortunately even the newspapers that had carried ‘exclusives’ about the possibility of a criminal complaint did not see it fit to carry our request to the minister for a copy of the said report (see links of newspapers)

Dear Sir,
Good Morning. Attached is a letter for Hon MHRD Minister, Mr Prakash Javdekar which I would request is placed before him at the earliest.
The letter (scanned and attached) has been dispatched in the original by registered post and also faxed to the Ministry. 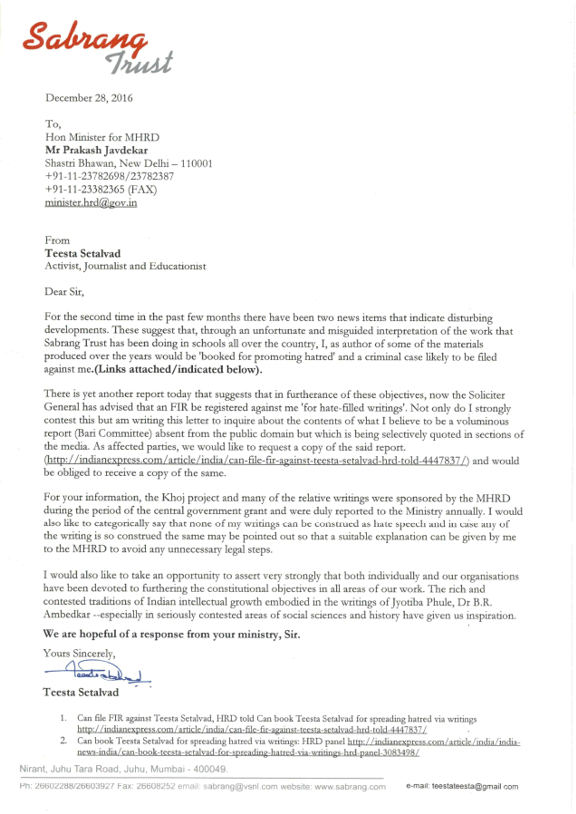 In response to the ‘charges’, the facts are as follows:

This is close to a two-year old story. In March 2015, around the time that the bid of the Gujarat government to have us arrested failed (over yet another false criminal case where Javed Anand and I were both sought to be implicated), the overzealous Smriti Irani announced an MHRD probe against a project that Sabrang Trust had received for the KHOJ Education for Plural India programme. This project ran between 2010-2014 after receiving one extension. In typical proto-fascist style allegations have covered the infamous ‘misappropriation of funds’ to now spreading hatred. The charge of misappropriation obviously could not be proven and so it is now down to Teesta Setalvad ‘s views on the RSS and Murli Manohar Joshi according to the Indian Express!

What has also conveniently (and quietly) escaped public comment or notice that each and every false criminal complaint against me (Teesta Setalvad) after the Zakia Jafri case began to get traction (2010, 2011, 2013, 2015), were instigated by a former disgruntled employee of CJP, Raees Khan who has since been rewarded by the Modi regime with a position on the Central Wakf Board.

(In February 2016, in her inimitably inaccurate style the minister Irani even said that a Teacher’s Reader authored by Teesta Setalvad and used in 2001 should be put down to the MHRD project under Mr Kapil Sibal when in fact the MHRD project only began in 2010!)

In any case, the KHOJ rendering of Shivaji, Jyotiba Phule, Babasaheb Ambedkar is one that has been inspired by India’s best historians that have traced Shivaji’s non-Brahmanical origins especially the hostility Shivaji faced when he could not be coronated due to his birth into the peasant castes.

Motive
It seems apparent that with the Gujarat police having failed to substantiate its allegations of misappropriation of trust funds by Teesta Setalvad and Javed Anand, despite our having submitted over 20,000 pages of documentary evidence, and with the Union Home Ministry having instigated a 22-hour raid on the office and residence of the above mentioned by the CBI, yet another ministry has been tasked with maligning Sabrang Trust and hounding Teesta Setalvad on bogus charges.

There have been three sets of vindictive actions emanating from Delhi since the Modi regime acquired power. Before that Teesta Setalvad faced vindictive criminal cases within the state of Gujarat. First is the false criminal case by the Gujarat Crime Branch; second is the vindictive hounding by the Ministry of Home Affairs (MHA) and the subsequent revocation of the FCRA renewal after it was first granted to both CJP and Sabrang trusts), the third is the criminal prosecution by the CBI on false charges of violation of FCR Act by Sabrang Communications (few are ever prosecuted on what, even if true is a civil charge and it is not irrelevant that the CBI is directly under the PMO) and now this.

(The earlier false cases and harassment of Teesta Setalvad by the Gujarat Police also continue, especially related to the twitter case despite an immediate apology by her within forty minutes of the tweet).