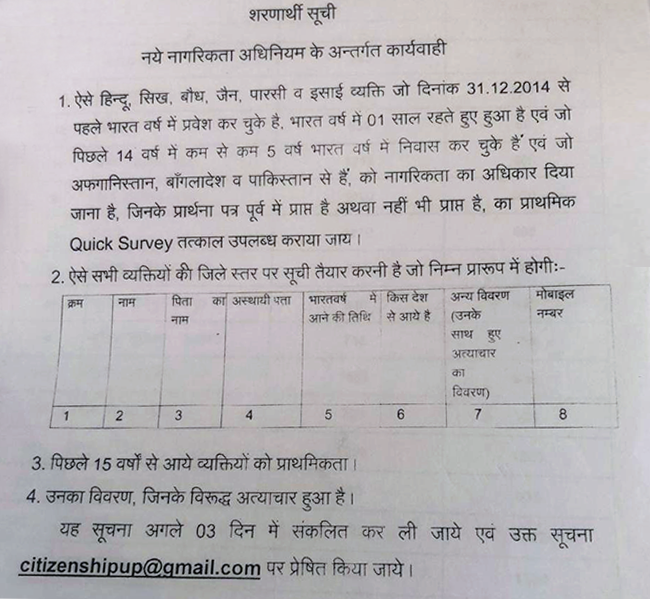 Officials in the district administration told NDTV they had started surveying people last month, even before the bill was notified, on the basis of an unsigned, unmarked, undated document.

by A Mariyam Alavi

It is estimated that there are around 32,000 to 50,000 CAA beneficiaries in Uttar Pradesh12Pilibhit, Uttar Pradesh:

Even as protests against the Citizenship Amendment Act (CAA) continue across India, the Uttar Pradesh government has begun the process to identify potential beneficiaries under the controversial law that promises citizenship to non-Muslim refugees from three neighbouring countries.

No exact figure is available, but estimates range from 32,000 to 50,000 beneficiaries in Uttar Pradesh.

A bulk of them, close to 37,000, have been identified from Pilibhit district, abutting Nepal, where a large number of families from Bangladesh settled several decades ago.

It is unclear, however, how the government is drawing up these lists, given that verification criteria under the Act have not yet been made public.

Officials in the district administration told NDTV they had started surveying people last month, even before the bill was notified, on the basis of an unsigned, unmarked, undated document.

They say the document, meant to collect beneficiary information, came from the state government in Lucknow.

The document has eight columns asking for name, father’s name, place of stay in India, where did they come from and when. It does not mention any requirement of proof, or documents.

It also asks for a description of the kind of atrocities they faced, presumably in their home country.

The feedback email on the questionnaire is a Gmail ID: [email protected]

It also asks for a description of the kind of atrocities they faced, presumably in their home country.

The document has eight columns asking for name, father’s name, and place of stay in India among other things.

When NDTV spoke to several people who made it to the list, they said they were not asked by government representatives for any proof of migration, and only asked to show their Aadhaar card.

The district magistrate of Pilibhit claimed they are checking documents of the refugees, but denied any knowledge of the unsigned document.

However, sources in the administration told NDTV they had indeed received the unsigned questionnaire from Lucknow but insisted that it came with an official, signed cover letter. They however, were unable to locate this cover letter.

A top official in Lucknow claimed that the entire exercise was informal, and only in the nature of a preliminary inquiry. He said no list of potential beneficiaries has been sent to Delhi, as some in the media have reported.

A government explainer put out by the Press Information Bureau says that “no foreigner will automatically get citizenship under the Act. Each application will be scrutinised and only those who comply with the criteria will be granted citizenship”.

It is unclear whether those identified by the Uttar Pradesh government will be able to pass scrutiny, as and when rules are framed.

Jagdeesh Mandal, a 57-year-old beedi factory worker who says he fled from Bangladesh in the 70s, says it will be impossible for him to prove that he came from Bangladesh before 2015, or that he fled religious persecution.

Additionally, many of the illegal migrants NDTV spoke to, and who have made it to the government’s list, have many of the trappings of citizenship. Everybody had an Aadhaar card. Many also had other government-issued documents like ration cards, PAN cards, and have bank accounts. Some even have Voter ID cards, and claim that they have voted as well.

“I have Aadhaar card, Ration Card, Voter ID and bank accounts,” Kalipadh Haldar, who had come to India in 1970 from East Pakistan, said.

Mr Haldar said, that he like many others, gets some government benefits as well. He said had a gas connection and also received some aid to build a toilet.

Dulal Mistry, who says he came in 1968 from East Pakistan but has no documents to prove it, has an Aadhaar card, ration card, and a Voter ID. “I vote also,” said.

Citizenship for these families is also about their identity as pointed out by Sukirti Vishwas, who said her grandfather had come to India at the time of partition but her family is yet to get citizenship.

“We get all the benefits from the government- ration, toilet, help to build houses. But nobody accepts us as Indians. They call us infiltrators… It’s about our identity,” she said.