Modern-day slavery in focus is supported by:

Impoverished migrant workers in Thailand are sold or lured by false promises and forced to catch and process fish that ends up in global food giant Nestlé’s supply chains.

The unusual disclosure comes from Geneva-based Nestlé itself, which in an act of self-policing announced the conclusions of its year-long internal investigation on Monday. The study found virtually all US and European companies buying seafood from Thailand are exposed to the same risks of abuse in their supply chains. 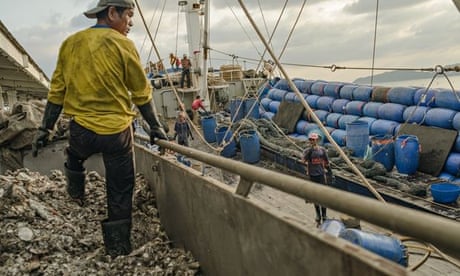 Nestlé, among the biggest food companies in the world, launched the investigation in December 2014, after reports from news outlets and non-governmental organisations tied brutal and largely unregulated working conditions to their shrimp, prawns and Purina brand pet foods.

The labourers come from Thailand’s much poorer neighbours Myanmar and Cambodia. Brokers illegally charge them fees to get jobs, trapping them into working on fishing vessels and at ports, mills and seafood farms in Thailand to pay back more money than they can ever earn.

“Sometimes, the net is too heavy and workers get pulled into the water and just disappear. When someone dies, he gets thrown into the water,” one Burmese worker told the non-profit organisation Verité in a report commissioned by Nestlé. “I have been working on this boat for 10 years. I have no savings. I am barely surviving,” said another. “Life is very difficult here.”

Nestlé said it would post the reports online as well as a detailed year-long solution strategy throughout 2016 as part of efforts to protect workers. It has promised to impose new requirements on all potential suppliers and train boat owners and captains about human rights, possibly with a demonstration vessel and rewards for altering their practices. It also plans to bring in outside auditors and assign a high-level Nestlé manager to make sure change is under way.

“As we’ve said consistently, forced labour and human rights abuses have no place in our supply chain,” Magdi Batato, Nestlé’s executive vice-president in charge of operations, said in a written statement. “Nestlé believes that by working with suppliers we can make a positive difference to the sourcing of ingredients.”

Nestlé is not a major purchaser of seafood in south-east Asia but does some business in Thailand, primarily for its Purina brand Fancy Feast cat food.

For its study (pdf), Verité interviewed more than 100 people, including about 80 workers from Myanmar and Cambodia, as well as boat owners, shrimp farm owners, site supervisors and representatives of Nestlé’s suppliers. It visited fishing ports and fishmeal packing plants, shrimp farms and docked fishing boats, all in Thailand.

Boat captains and managers, along with workers, confirmed violence and danger in the Thai seafood sector, a booming industry that exports $7bn worth of products a year, although managers said workers sometimes got hurt because they were drunk and fighting. Boat captains rarely checked ages of workers, and Verité found underage workers forced to fish. Workers said they labour without rest, their food and water are minimal, outside contact is cut off, and they are given fake identities to hide that they are working illegally.

Generally, the workers studied by Verité were catching and processing fish into fishmeal fed to shrimp and prawns. But the Amherst, Massachusetts-based group said many of the problems it observed are systemic and not unique to Nestlé; migrant workers throughout Thailand’s seafood sector are vulnerable to abuses as they are recruited, hired and employed, said Verité.

Monday’s disclosure is rare. While multinational companies in industries from garments to electronics say they investigate allegations of abuse in their supply chains, they rarely share negative findings.

“It’s unusual and exemplary,” said Mark Lagon, president of the non-profit Freedom House, a Washington-based anti-trafficking organisation. “The propensity of the PR and legal departments of companies is not to ‘fess up, not to even say they are carefully looking into a problem for fear that they will get hit with lawsuits.”

In fact, Nestlé is already being sued. In August, pet food buyers filed a class-action lawsuit alleging Fancy Feast cat food was the product of slave labour associated with Thai Union Frozen Products, a major distributor. It’s one of several lawsuits filed in recent months against major US retailers importing seafood from Thailand.

Some of the litigation cites the reports from AP, which tracked slave-caught fish to the supply chains of giant food sellers, such as Walmart, Sysco and Kroger, and popular brands of canned pet food, such as Fancy Feast, Meow Mix and Iams. It can turn up as calamari at fine restaurants, as imitation crab in a sushi roll or as packages of frozen snapper relabelled with store brands that land on dinner tables. The US companies have all said they strongly condemn labour abuse and are taking steps to prevent it.

Nestlé promises to publicly report its progress each year.

JAM and the Pursuit of Nirvana
Handwara: 16-year-old girl was detained for 27 days. Where's the outrage? #Vaw
6 years ago, I supported UID. Here's why Aadhaar should be destroyed
Killing Gaza- #Film #MustWatch