OBC rural Gujarat Muslim poverty down from 40.5% to 1.9%-“Standard error” in GOI report 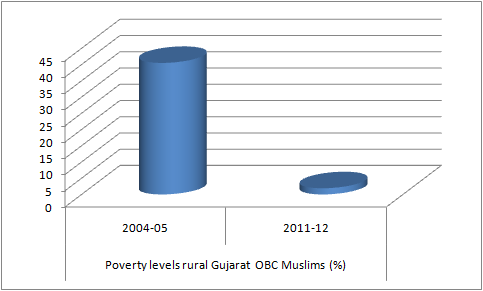 By Our Representative
Facts have come to light suggesting that there is something extremely suspicious with the data in the new report prepared by the Government of India-appointed committee headed by Jawaharlal Nehru University’s (JNU’s) Prof Amitabh Kundu on the condition of Muslims in India. The report is a follow-up of the famous Sachar Committee report of 2006, which had pointed towards negligence of the minorities, especially Muslims, in different social sectors, particularly education and health, and seeks to suggest that poverty in rural and urban Gujarat went down drastically between 2004-05 and 2011-12.

Quoting unreleased National Sample Survey (NSS) poverty data for socio-religious groups, the report seeks to suggest that the in rural Gujarat, the number of Muslims below poverty line (BPL) fell from 31 per cent (about one-third of their population) in 2004-05 to a “measly” 7 per cent in 2011-12. Surprisingly, it does not find things as rosy in urban Gujarat. The report says that comparison of the same period reveals, those in the BPL population in urban areas declined from 42 per cent to 14.6 per cent.
While a copy of the report, submitted to the Union ministry of minority affairs, could not be obtained, the data used in the report, in possession of Counterview, suggests something fishy. The data show, in rural Gujarat, other backward classes (OBC) poverty levels, which were 40.5 per cent in 2004-05, have gone down to just 1.9 per cent in 2011-12! As against to this, the Other Muslims’ poverty levels in rural Gujarat have gone down, during the same period, from 23.2 per cent in 2004-05 to 18.7 per cent.

These data, which form part of a paper prepared by Prof Kundu, give no explanation on why this may have happened. When contacted with the query as whether there was any “typographical error” in the figures, Prof Kundu told Counterview that similar questions have been raised “concerning Gujarat’s poverty reduction”, and he was looking into “the issues of standard error in somewhat greater detail.” He believed, the “standard error in the estimates for different socio-economic groups in rural and urban areas would be high due to small sample size in the NSS.”
Based on these data, which admittedly are ridden with “standard error”, well-known pro-Narendra Modi economist Prof Arvind Panagariya, belonging to the no-liberal school and is with the Columbia University, has declared, “In rural areas, Gujarat leads with the lowest poverty ratio of 7.7 per cent for the Muslims.” The data that he has calculated (despite “standard error”) suggest that overall poverty in Gujarat (rural plus urban) is down from 36.5 per cent in 2004-05 to 11.4 per cent in 2011-12. He just accepts the unreleased NSS data he has obtained on face value, without bothering to question their validity.
Interestingly, one of Prof Panagariya’s closest colleagues, Swaminathan S. Anklesaria Aiyar, an economist and a scholar-journalist known for objective comments on economic matters, has made the following comment, in his article titled “Poverty Falls for Dalits and Muslims” on the data while reviewing Prof Panagariya’s analysis in a working paper, “Poverty by Social Religious and Economic groups in India and its Largest States, 1993-94 to 2011-12”:
“Astonishingly, the rural Muslim poverty ratio is lowest of all in Gujarat, at 7.7 per cent. This is much lower than the urban ratio, and so raises the question whether it is a statistical quirk. Muslims in Gujarat were victims of terrible violence in 2002, and many still feel unsafe.”
Further: “Some caution is required in interpreting the data. First, 2004-05 was a bad monsoon year while 2011-12 witnessed a good monsoon, and this may exaggerate the achievement in this period. Second, the year-wise variations in some states look very steep, and seem to need a pinch of salt. Third, the government has decided to create a new poverty line, and all the data will have to be recast after that.”
http://www.counterview.net/2014/03/standard-error-in-government-of-india.html