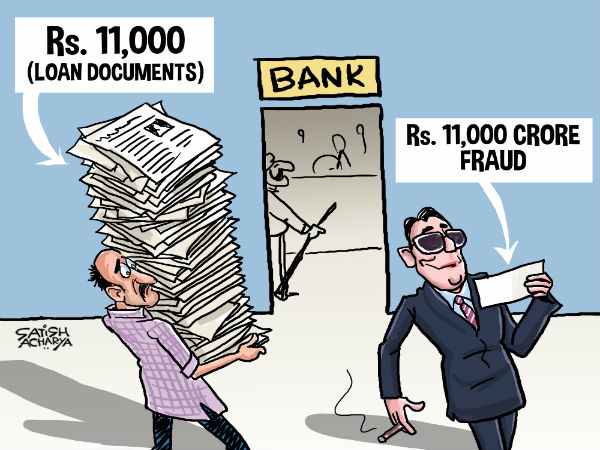 Heartiest Congratulations to the Govt of India. They have allowed the second billionaire who has done the biggest fraud of India to leave the country. Where are those who are charged with the responsibility of keeping an eye on the financial institutions in the country, like the revenue intelligence wings in Banks, RBI, ED and others? Why the Government of the day did not act on the basis of complaints sent by certain individuals or in some case even by Director of Allahabad Bank? When the RBI conducts its audit of the Bank finances how could they not detect it? Scam after scam no one knows what happened, why it happened and how to plug it? No learning, no analysis and also no one to blame except the invisible and dumb system. What a sad state of inequality, fraud and nepotism in one of the largest sham democracies in the world which is being looted by just 100 odd billionaires and politicians on a daily basis while hundreds of millions have no food, no toilet, no healthcare access, no electricity and no water and millions eat from garbage across India. But some billionaires can spend a billion dollars on a house or millions of dollars on a party in one evening.

Like Vijay Malaya in London, Nirav Modi will be sitting in a nice Swiss Chalet enjoying some fine wines while the losers called the tax payers of India enjoy the bullshit media news stories and get robbed every single day by the politician-businessman-banker-police nexus. And enjoy sending Whats app videos all day long else the Gods will be angry on them and not give them money while the billionaires on Earth rob them dry. The super elite who control this world will continue to do whatever it takes to protect their own assets. No one cares about the masses and the while world is in a doom and gloom scenario from corruption scandals, to money printing to massive job cuts. There may be many such cases yet to come to light. Example of Crony capitalism.

All LOUs issued by any bank in India has to be reported to RBI on a quarterly basis. Why is it that when the first LOU was issued way back in 2011, without entering into the CBS, it was ignored by RBI and the PNB top management despite the amounts being so huge. How were the LOU’s honored by the other banks if they were not through CBS and no record of these LOU’s was present in the Banks ledgers. Where these LOU’s issued without any reference number or authorized signature or on plain paper as a hand written note and hence without any printed record? When these LOU’s were presented by the fraudsters to the other banks abroad did they not raise demands from PNB after the payments were made by them? When an LOU is issued by one bank to another, the receiving bank sends a letter of confirmation to the issuing branch and it’s controlling office like Regional or Zonal office. Did Axis Bank and Allahabad Bank do so. If so, then why didn’t anyone in the PNB controlling office raise an alarm. Apart from PNB, the other organization who should be answering a lot of questions in this matter is the RBI...

PMO refused to a RTI petition to inform who are all accompanied PM during his abroad trips. A complaint petition was filed with PMO to look in to the irregularities in PNB as early as July 2016 and why no action was taken by RBI and FM. Nirav Modi’s brother is married to Mukesh Ambani’s niece. Any explanation? The CBI received a complaint from PNB on January 29 and a case against Modi was registered on January 31. However, by the first week on January, Nirav Modi and his family had already fled the country. His brother, Nishal, a Belgian citizen who is married to the daughter of Mukesh Ambani’s sister, left India on January 1. Modi’s wife, Ami, a US citizen, and business partner, Mehul Choksi of Gitanjali Gems, fled on January 6. What has happened to Robert vadhra- DLF investigation. Where is Lalit Modi? Where is Vijay Mallaya? To top it all now we find the father of big scam Massive PNB scam which is to the tune of 110000 crores and it also involves major Public sector banks. What is Rafale deal?

Whenever a SWIFT message is sent it is verified checked and authorised at various checkpoints by personnel in various capacity and heirarchy. Why no one from the forex dept of PNB raised an alarm. This seems more like a top level collaboration than a branch level fraud. Whenever such huge amounts are sent through SWIFT, bypassing CBS, it generates daily reports. Were the concurrent auditors of PNB sleeping for seven years that they could not go through these daily reports. While the PNB management would like us to believe that the whole fraud has been committed by a DGM rank officer or few officials of the bank and the vigilant Directors were able to unearth this fraud now.

How the taxpayers money has been swindled so blatantly- why these same banks have been recapitalized 80000 crores once again without any recovery of earlier NPA. What is the social structure- why in spite of so much of warning Aadhar is blatantly imposed on gullible citizens of the country. PNB and Govt are so broke that they have now decided to sell almost all real estate owned by PNB. This fraud is moving and spreading rapidly. The fatcat billionaires of India have “loans” in thousands of crores EACH that they have siphoned off into their own pockets and nicely run away in connivance with the ruling Govt while average loan of farmers is just 200,000 EACH ($3,125) and 3,000 – 4,000 farmers commit suicide every year.

The political parties on every media channel and even in press have drowned the debate by blame game and rhetoric so that no one can get to the truth. It’s high time to question crony capitalism which has engulfed us in lust of greed and money power ? let us think? or we are beyond repairs. 4 of India’s top jewelers are involved in the largest ever fraud in India’s history. Gitanjali Gems (Mehul Choksi),Ginni (Choksi subsidiary), Nakshatra jewelers (Choksi subsidiary),Firestar Diamond (Nirav Modi and his wife and his brother), All put together they have siphoned off $1.8 billion of tax payer money from India’s banking system. Owner of Firestar Diamond, Nirav was in CBI jail last week for another fraud case of $43m. This is the largest ever scam in India. The wonderful excuse being offered by the banking experts, financial wizards and even bureaucrats is that it is a “systemic failure”. So now we are left to curse the system and let go of these worthies because they are innocent and the bad system is at fault.

#India - Police Brutality Against Agitators At Kathikudam
'Himmat' during the Emergency: When the Press crawled, some refused to even bend
Itishree Pradhan murder case - Open Letter to Gopal Subramanyam
Boycott Mysore Pak this Diwali if it's not renamed Mysore India