Poet of the feminine: The legacy of Subramania Bharati 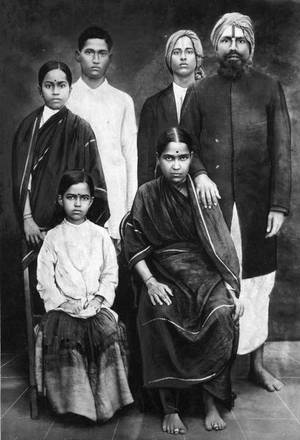 A family photo taken in 1917 with Shakuntala and Chellamma seated left to right. Standing left to right are Thangammal, Ramu and Vijayaraghavan (friends) and Bharati.   | Photo Credit: The Hindu Archives

In the poet’s death centenary year, remembering his advocacy of women. And remembering the women who preserved his rich legacy

When C. Subramania Bharati died 100 years ago on September 11, 1921, he left his literary legacy in the hands of women: his wife and two daughters. There is something deeply and even spiritually satisfying about this fact. Bharati was a champion of women’s rights. As a poet, mystic, and visionary, his advocacy of women reached unique heights. He wrote that women were the propagators of civilisation, not primarily in the sense of propagating human population, but as the preservers and propagators of culture. Accordingly, women must “write the laws” and lead society.

In his English-language essay entitled ‘The Place of Woman’, he writes: “Civilisation is the taming down of man by woman. Men, indeed, have till now been trying, with scant success, to civilise one another by means of the sword and the bullet, the prison cell, the gibbet, and the rack. But it has been the lot of woman to have no other weapon than fables, parables, and symbols in her work of civilising man. … Where woman comes, comes Art. And what is Art, if not the effort of humanity towards divinity?”

But the society of Bharati’s times was not so well-disposed towards women. The notions of women’s property, women’s leadership, and women’s rights were all woefully, fatally underdeveloped in early 20th-century India, which was languishing in the grip of the British colonial administration. The British made a show of improving women’s lot in India, yet they were doing so at a time when women in Britain had still not acquired full “personhood” under the law. The British wielded Western notions of women’s place in society like a blunt-edged weapon, striking down the evil of sati with the same blows that eventually levelled Kerala’s progressive, matrilineal traditions.

As a poet, Bharati simply saw women as equal. While many influences shaped his mind — notably, his extensive reading in multiple Indian languages, including Sanskrit, as well as in English and European languages — his attitude towards women had a visionary quality that transcended even the insights gained from his reading. But he used all of the knowledge and intelligence at his disposal to advocate for women’s social status, and to support his case that the oppression of women was not a necessary or even acceptable part of Indian tradition. To him, it was a wholesale evil. He referred to it as “slave[ry]”, writing:“There is no use shrinking from strong language when we have to deal with terrible facts.”

Bharati’s vision of women’s freedom originated deep within the inexplicable, intuitive wellspring of his poetic talent. It was brought bubbling to the surface by Sister Nivedita. As Swami Vivekananda’s disciple, she had come to India to lead initiatives for women’s education. Bharati was on his way home from the Surat Congress when they met. She welcomed him with the words, “Where is your wife?” He later wrote that she “taught him the meaning of true service to the nation,” and dedicated the first volume of his national songs to her.

For Bharati, words led to action. It was not enough for him to speak and write about women’s equality; he also had to implement this “divine” truth in his own life. Accordingly, he practised equality at home — the true battleground of women’s liberation — telling his wife that she should be prepared to lead a procession on his behalf if he were to be killed by the police. He encouraged his wife and daughter to welcome guests to their home, offering them water to wash their feet as was customary in those days, defying the common practice of relegating women to the interior of the house.

In his poem ‘The Kummi of Women’s Freedom’, taking as its chief symbol the folk dance of Tamil women known by this name, he wrote:

Gone are they who said to woman: ‘Thou shalt not

open the Book of Knowledge.’

And the strange ones who boasted saying:

‘We will immure these women in our homes’—

To-day they hang down their heads. /

Dance the Kummi, beat the measure.

Let this land of the Tamils ring with our dance.

Yet, after his death, Bharati’s wife and daughters would face endless struggles. Chellamma was seven years old when she married Bharati — he was a mere 15 — and Bharati later writes of his strong objection to the tradition of child marriage in India. Chellamma had little access to formal education. In 1921, when Bharati died suddenly, her transformation from young wife — she was then only about 30 years old — to widow was complete and terrifying. Her hair was shorn, her blouse taken away.

Yet Chellamma had acquired formidable, almost superhuman strength from her husband and his life-affirming poetry. Rather than being crushed by her circumstances, she proved to be endlessly resourceful, constantly finding new ways to overcome the oppressive influences that surrounded her. Her primary goal became the publication of Bharati’s works. She intended to publish his complete works and then bequeath them to the people of Tamil Nadu upon her own death. Beginning in 1922, she brought out five volumes of his writing under the imprint ‘Bharati Ashramam’. Chellamma also became his first biographer, in spite of the fact that she herself did not write, dictating his biography to her elder daughter, Thangammal. This book, Bharatiyar Charithiram, has since been republished in a new edition by her granddaughter, a pioneering Tamil scholar who obtained the first Ph.D. on Bharati’s works, Dr. S. Vijaya Bharati, in 2003. 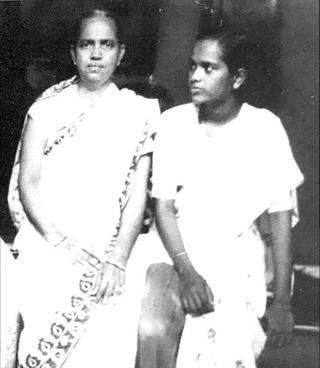 Chellamma’s publication efforts came to an end when she had to pay for her second daughter’s wedding, selling the works to Bharati’s half-brother and ceding her involvement in the publishing endeavour to her male relatives. In the early years after Indian Independence, Viswanathiyer sold Bharati’s copyright to the Madras government. In its turn, the government gave the works to the public as a gift in 1954, at least fulfilling Chellamma’s ultimate intention in this regard.

Throughout this time, Chellamma and Thangammal, and to an extent Shakuntala (who had been quite young when her father died), remained active in propagating Bharati’s ideas and his literary legacy. Without their efforts, no one can say what would have happened to Bharati’s works when he died. Thanks to their involvement, continuity was assured, and, with typical devotion, the preservation of his invaluable literary legacy became the focus of their lives. When Thangammal spoke about her father in Singapore and Malaysia, the newspaper coverage of the time states that she drew crowds second only to those drawn by Mahatma Gandhi. Thangammal, too, became a Tamil writer, writing creative and original work in the form of short stories and articles that were published regularly, and, when necessary, supporting her family with her literary earnings.

Indeed, these women and their children always lived with the spectre of poverty shadowing their lives. After all, Bharati’s works had been proscribed by the British during his lifetime, limiting his earnings as a writer despite the popularity of his work. When the copyright was acquired from Chellamma, her subsistence, and that of her daughters, became their sole responsibility. Even at the best of times, writers can lay little claim to inter-generational wealth, since literary work, in contrast to material wealth, always becomes the property of the public sooner or later. My mother has related how, on her deathbed, Chellamma would cry out to her neighbours in Kadayam, her ancestral village, about her grandchildren: “Who is going to educate these children?”

Yet the ongoing struggles of these women were gradually being sidelined, their contributions neglected. As time went on, little mention was made of Chellamma’s work as the creator of the field of Bharati biography, or of Thangammal’s contributions on her father — or of her own literary efforts, which were eventually collected and published in a book by her daughter, S. Vijaya Bharati, in 2004 (Amudhasurabhi Press). S. Vijaya Bharati’s pioneering work on Bharati was not only marginalised, but, at times, she was also personally targeted by would-be rivals. Her absence in Canada, where she went to live with her husband, an English scholar pursuing graduate work in that country, in 1969, made it easier than ever to ignore or downplay her contributions. They continued, nevertheless, for the next 40 years from overseas, despite the stigma associated with both immigration and emigration at that time. “Ownership” of Bharati was asserted by the men who remained behind. 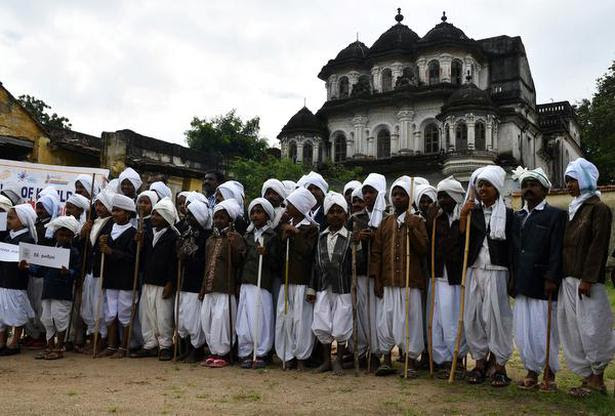 In this process, misinformation took root. The public gradually became distanced from their poet, losing touch with his words, kept from the truth of his personality. This situation was deeply unjust. For Bharati was a genius — a truly multi-faceted, multi-lingual visionary — who wanted the fame of Tamil culture to spread all over India, and who wanted Indian greatness to be celebrated all over the world. In what did that greatness consist? To Bharati, India’s was a culture of unique, harmony, deeply symbolic, of the celebration of beauty, of compassion, of individual rights and freedoms, of equality. This was the India that he envisioned, the India that would be “born again,” reflecting, as he called it, the “higher” “human will.” Bharati’s vision was Indian, and universal. No-one could “own” Bharati or his songs.

Inspired by Mahatma Gandhi, Bharati’s daughter Thangammal, then a teenager, enthusiastically took up a spinning wheel. Seeing her, Bharati advised her to put it away. “Writing is our family’s work!” he said. Today, I am awed and humbled by the contributions of three generations of women writers before me — my great-grandmother, my grandmother, and my mother — who have played a crucial role in keeping Bharati’s legacy alive for a century, through their selfless devotion and irrepressible creativity. Thanks to them, his legacy lives on in the world, and in our hearts.

The writer is the editor of The Coming Age, a collection of Bharati’s original writings in the English language, published by Penguin Modern Classics, and the creator of an accompanying podcast, Bharati 100. She is the poet’s great-granddaughter

Cong, BJP? No, our anti-nature, anti-people policies are bipartisan
Odisha pays scant heed to tribal ministry's directions on mining for Vedanta
“Our Health Workers Are Working in Fear”: After Myanmar’s Military Coup, One Year of Targeted Violen...
More scholars on IB radar for ‘pro-Maoist’ ideology #WTFnews