Silicosis Victims and the Importance of the Supreme Court Judgment #mustshare

BY AMULYA NIDHI AND ASHISH GUPTA

The Supreme Court’s order on compensation to silicosis victims is a relief to workers and their families who have had a long wait for justice. 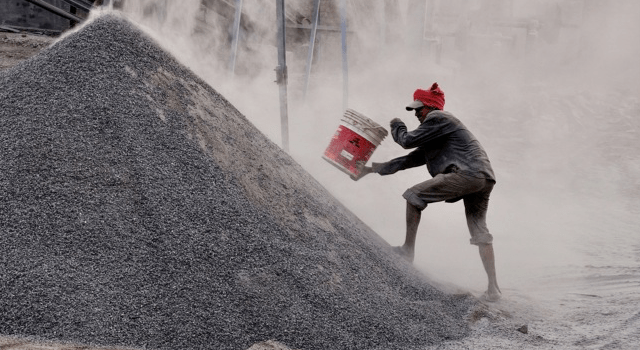 Earlier this month, the Supreme Court passed an important order which has positive implications from multiple perspectives. It asked the Gujarat government to pay compensation of three lakh rupees within a month to families of deceased migrant workers who died of silicosis, an incurable disease they had contracted due to working in the unregulated quartz crushing factories of Godhra and Balasinor.

The struggle for the rights of these workers, who hail from tribal districts of Madhya Pradesh, is almost ten years old. The long wait for justice has come to a full circle with this order from the highest judicial body.

Tribal communities from districts of Alirajpur, Jhabua and Dhar of Madhya Pradesh have been pushed to migrate out of their villages in search of work, a phenomenon that has risen significantly in the last decade-and-a-half. Most of them are marginal farmers dependent on rain fed agriculture on a few acres of land.  With just one cycle of crop annually and the miserable state of implementation of MGNREGA on the ground, they are left with no choice but to migrate to the bordering state of Gujarat.

Scores of families ended up in the stone crushing factories of Gujarat where they worked for months in deplorable safety conditions. They inhaled fine silica dust far beyond permissible quantities and by the turn of a year started returning home with common symptoms like coughing, shortness of breath and fatigue. Numerous workers became bed ridden with the occupational disease known as silicosis, which has no cure. Silicosis is a form of lung disease caused by inhalation of crystalline silica dust and is marked by inflammation and scarring of the lungs. As the powder hardens in the lungs, the patient slowly and surely inches towards an inevitable death.

For a local people’s organisation like Silicosis Peedit Sangh that started working in silicosis-affected villages of Madhya Pradesh, the challenges were manifold to start with. Initially, back in 2006, the work involved building evidence that migrant workers had contracted silicosis and on the extent of spread of the disease in several areas through studies, medical records, health checkups and investigation. It took them years to establish the fact that the workers were, in fact, suffering from silicosis as a result of working in these factories. The workers were not given any identity papers from these factories, thus they only had circumstantial evidences to link the disease to the deadly stone crushing factories. The process of mobilisation and awareness also began around the same time by a team of researchers, activists and medical professionals who soon found out that the villagers had a local alias for describing this disease, calling it “Godhra ki factory wali bimari” (illness from the factories of Godhra).

Double burden of deaths and loans

Silica dust had ruined their lungs and hundreds started dying. As family members used to migrate together, there were multiple deaths in the same family. To add to the burden of the already poor, families spent a lot of money on treatment of one or more of their kins. As a result, they either sold off their agricultural land and livestock or incurred loans at high interest rates. These families not only lost young, earning family members to this disease, but also incurred the double burden of having sold their land or being weighed down by heavy mortgages.

Mohan Suliya who supports the work of Silicosis Peedit Sangh took us to Balwani, a small village in the Dahi Block of Dhar district.  This is one village of the 105 villages where the group works. Balwani had around 50 people with silicosis, of whom 20 had already died. Madhavi, along with four others from her family went to work in the Gayatri stone crushing factory located in Balasinor. Just six months later, they all started feeling unwell and returned home. The family sold off their livestock and mortgaged their land to support the rising treatment costs. She finally lost her mother, two brothers and sister-in-law to silicosis. She herself carries the disease and trudges through debts, while taking care of her old father. Madhavi said, “With my brothers gone, I am not sure when I‘ll be able to pay off all the loans. I have received no support from the government. My father does not receive any pension. It is very difficult to get by as I am always tired and run out of breath while working.”

NHRC to the rescue

Juwansingh from the village of Rodada in Alirajpur sent a complaint to the National Human Rights Commission (NHRC) with the help of local groups in 2006. He had written about the fact that more than 30 people had contracted silicosis in his village and no relief was coming their way. His letter was substantiated by a report titled ‘Destined to Die’ published by a team of researchers working on the ground. NHRC had received a few other such complaints and took the matter seriously. They sent a team of investigators on the ground. NHRC recorded scores of statements from villagers, visited the factories and met up with local health officials, which later became crucial evidence.

Around the same time a PIL was filed in the Supreme Court and NHRC joined in as a party. The court directed the NHRC to take up the case and recommend relief. This was in 2009.

Blatant refusal: The organised vs. the unorganised sector

Pursuant to the order of Supreme Court, NHRC, after rounds of negotiations, passed an order in 2010 asking the Gujarat government to pay compensations to the families of deceased victims and the Madhya Pradesh government to provide rehabilitation to the ailing ones. The NHRC reported in painstaking detail on the 238 dead and 304 affected patients.

The Gujarat government refused to lend an ear to the NHRC order and instead conveniently took cover under the Employees’ State Insurance (ESI) Act of 1948 which primarily addressed workers in the organised sector. They maintained that as some of these factories were registered under the Department of Labour’s Factory Act, the workers should claim their dues from ESI.

This is a classic example of state governments being insensitive to realities of poor workers falling victim to the so called unorganised sector and unregulated organised sector.

Kamal Madiya of Jasermatapada village in Jhabua lost his father, wife, four brothers and two sisters-in-law to silicosis. He tells us how the factory officials at Dhartidhan stone crushing factory in Godhra used to destroy the muster roll every week after paying their wages. He said, “None of us were ever given an identity card or any kind of employment papers.”

Reminding the state of its accountability to workers, the order of the Supreme Court thus lives up to the hard truth that we are still a long way from actually treating workers working in the organised sector appropriately. At the same time, it echoes the voice of thousands of workers in the unorganised sector who are fighting for their rights to work with dignity and to make the state accountable for loss of lives and abilities.

As silicosis-affected families kept waiting for the legal machinery, the local organisations worked on the ground to link victims to basic safety net schemes for the poor like the Indira Awaas Yojana (housing for BPL families), free treatment cards or standard pension schemes like widow and old age pensions. The ailing patients became weak and found it difficult to migrate outside for work, and thus employment schemes like MGNREGA became their primary source of livelihood within the village.

A recent survey (2015-2016) conducted by a local organisation working in the 105 villages of Alirajpur, Dhar and Jhabua identified 1,721 silicosis patients, revealing a rising death toll of 589 workers so far. The data reveals that hardly 10% of patients received any kind of state pensions and a mere 6% received money under the housing scheme. Even more shocking is the fact that over the past five years, only 7% affected families got work under MGNREGA in 2011 which dwindled down to 0.7% in 2015.  Poor implementation of schemes like MGNREGA deals a harder blow to such households and leaves them in a worse economic situation.

Dinesh Raisingh from Kachchaldhara village in Jhabua district is a frail man, affected by silicosis, albeit strong in spirits. He has been fighting for the rights of silicosis-affected workers for the last eight years. He was present in the Supreme Court when the order for compensation was passed. He was smiling, “I can go back to my village and give good news to the people who have been waiting so long.”

In recent estimates, there are over 3 million workers exposed to silica dust in India, whilst an additional 8.5 million work in construction and building activities, similarly exposed to quartz dust.

Amulya Nidhi is a health activist working on issues of health rights in Madhya Pradesh and other parts of country. He is a National Working Group member of Jan Swasthya Abhiyan.

Ashish Gupta is a medical doctor. He works closely with local groups on the issue of silicosis.http://thewire.in/2016/05/17/silicosis-victims-and-the-importance-of-the-supreme-court-judgment-36553/