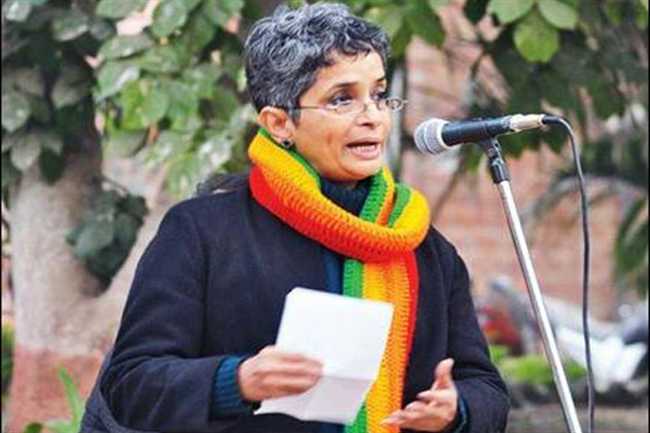 We, the undersigned women’s rights groups, activists and academics, are shocked to learn that the JNU administration has adopted a biased and mala fide procedure to institute an enquiry against Professor Nivedita Menon, eminent academic and well-known feminist who is Chairperson of the Centre for Comparative Politics and Political Thought at the School of International Studies, JNU. We are appalled to learn that Professor Bidyut Chakrabarti has been appointed as the head of the inquiry committee against Nivedita Menon, even though it has been brought to the notice of the administration that Prof. Menon in 2007 had deposed before the committee against Prof. Chakrabarti in an inquiry in a sexual harassment complaint at Delhi University. The appointment of Professor Chakrabarti (who is an external member of JNU’s Executive Council) as head of an enquiry committee against Professor Menon, who testified against him earlier, reeks of bias amounting to a breach of Professor Menon’s right to a fair and impartial inquiry.

It is shocking that members of JNU’s Academic Council first learnt about this inquiry committee constituted by the Executive Council in July 2017 only when members of the Academic Council received a letter inviting them to depose in front of the committee if they had anything to say about the “events leading to the disruption” of the 142nd Academic Council meeting held on 26 December 2016. The terms of reference of the said committee were not made public nor was it clear which service rules were invoked to constitute this committee.

After this general letter went out, Prof. Nivedita Menon received a letter from the Bidyut Chakrabarti Committee informing her that several AC members had deposed that she had disrupted the AC meeting. The letter to her also mentioned a video that the Committee was shown, which allegedly shows Prof Menon addressing students and teachers outside the Administrative Block.

No other faculty member has received a notice to appear before the Committee in this connection.
Although Prof. Menon was served a notice to appear before the Committee, she was denied her right to be made aware of the specific ‘complaints’ that were central to this inquiry. Further, she was not given a chance to understand the nature of the depositions supposedly received from some AC members alleging that she disrupted the AC meeting, and how they formed prima facie adequate and sufficient grounds for instituting an inquiry against her, nor has she been informed about the provenance of the video referred to.

The JNU administration has exposed its own mala fide intentions by ignoring Prof. Menon’s repeated pleas to reconstitute the inquiry committee, given her legitimate apprehension of bias. Instead they have sent her repeated letters asking her to appear before the inquiry committee. We are deeply shocked that the JNU administration ignored the fact that the nomination of Prof. Chakrabarti as the chair of this inquiry against Prof. Menon is a violation of the principles of natural justice and the right to a fair procedure. Surely the JNU administration and its Executive Council should abide by the principles of a fair inquiry and ensure that such an enquiry should not be headed by someone who has grounds for bias.
This unethical and persistent harassment of an eminent scholar with an international reputation is yet another instance of the backlash being faced by feminists who stand up to sexism and sexual harassment in their professional spheres. It highlights the strategy adopted by people in positions of power, of trivialising sexual harassment and using their official positions to take revenge against women who have complained or testified against them.
We would like to stress that the very basis on which the JNU inquiry committee was formed is flawed and motivated and attacks the democratic and open functioning of a prestigious centre of higher education in India.
Further, we condemn the mala fide, motivated and baseless charges against Professor Nivedita Menon and the JNU administration’s attempts to target her and demand the immediate withdrawal of these charges and dissolution of the enquiry committee.

We further demand that Bidyut Chakravarti be debarred from any decision making on matters related to sexual harassment and/or GSCASH as an Executive Council member.

On 4 April 2007, a sexual harassment complaint was made by an employee of Gandhi Bhawan against the then Director, Prof Bidyut Chakrabarty, also faculty at the Department of Political Science, University of Delhi. The Delhi University apex committee on Sexual Harassment vide its report that was tabled and accepted by the Executive Council Resolution No 114 dated 8.10.07 resolved that:
1.A letter of warning be issued to Prof Bidyut Chakrabarty.
2.He should be asked to step down from the Directorship of Gandhi Bhawan.
3.He should be debarred from holding any administrative post in the University for a period of three years.
Subsequently, Prof Chakrabarty was removed from the position of Director, Gandhi Bhawan, Head of the Department of Political Science and Dean, Faculty of Social Sciences.
Prof Chakrabarty petitioned to the High Court, Delhi, not on the merits of the complaint but his right to cross-examine the witness (WPC No 8227/2007 dated 29.5.09). The Supreme Court in its order dated 12.1.10 for Special Leave to Appeal directed that cross examination for witnesses be carried out though the ‘witnesses need not be revealed’ and appointed Ms Binu Tamta, the Court Commissioner for the purpose of getting ‘answers to questions’ to be supplied by the respondent Prof Chakrabarty. The statements recorded by the Court Commissioner were heard on 7.5.10 and it was decided that the same be handed over to the Apex Committee for further action and closed the matter.
The Apex Committee considered the court recordings and submitted its report to the EC. The report was finally tabled in the EC on 21.3.12 and Resolution 235 accepted the findings of the committee. ‘The Council further resolved that Prof Bidyut Chakrabarty, be debarred from all the administrative posts and supervisory duties in the University for the remainder period out of the 3 years, if any.’ The Assistant Registrar (CR & Vigilance) wrote to the Head of the Department, Political Science vide letter no. CR-Vigilance/069/2006/17 dated 23.5.12 to implement the above EC resolution.
Prof. Chakravarti had petitioned the Delhi High Court also to quash the ‘ordinance XV-D of Delhi University on the ground that it is violative of Article(s) 14, 16 and 311 of the Constitution’ (Prof. Bidyug Chakraborty vs Delhi University & Ors., W.P.(C) No.8226/2007, 29 May 2009 at para 2). Justice Sikri and Justice Jain of the Delhi High Court held that since they had ‘read the requirements of complying with fundamental principles of natural justice as implicit in the inquiry procedure’, there was no need to ‘strike down the relevant provisions of Ordinance XV-D of the University of Delhi’ (Prof. Bidyug Chakraborty vs Delhi University & Ors., W.P.(C) No.8226/2007, 29 May 2009 at para 19).