Thames Water – a private equity plaything that takes us for fools 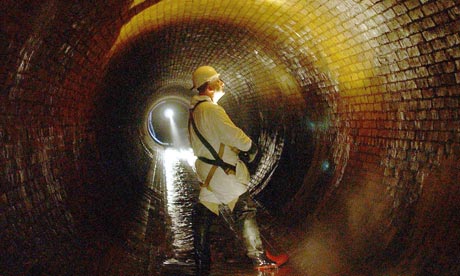 Inside one of London’s Victorian sewers. Photograph: Kirsty Wigglesworth/PA

London remains the effluent capital of Europe. The Victorian network of sewers is overwhelmed, and untreated or semi-treated sewage is leaking into the Thames, leaving the tide to do the rest, just as it did when the great engineer Joseph Bazalgette built the system. It is no longer acceptable – for consumers or in terms of international water standards. For more than a decade Thames Water has known that it needs to builda huge 20-mile tunnel 70 metres under the river to conduct the sewage out to sea, a £4bn investment that would last more than a century.

The chancellor, George Osborne, has identified the scheme, now gone through interminable planning inquiries, as part of the national infrastructure plan. And it is reliably tipped to be included in December’s autumn statement as eligible for the new infrastructure guarantee. British taxpayers will essentially guarantee the £4bn of Thames Water borrowing, so that whatever happens investors will get their money back. This will allow Britain’s biggest water company to borrow hugely, as a government body in effect, at the keenest rates of interest.

Which is why even if you don’t live in London you should pay attention: you will be offering the guarantee. Enough of such guarantees and Mr Osborne will be able to pronounce the tideway tunnel one of 40 priority projects to spearhead a multibillion-pound infrastructure boost – without increasing public borrowing at all. Magic!

However, those with long memories will recall that one of the principal arguments for privatisation was that no such guarantees would ever be needed again. When Thames Water was privatised back in 1989, raising a paltry £922m for the government, we were promised a utopia of private sector efficiency in which the water industry’s new private sector owners would create a first-class water system at much lower prices than the government ever could. The industry could escape Treasury constraints and borrow freely. Regulation would be light touch. The “dead hand” of government should be got out of this industry as out of every other.

Thames is certainly a different company, proudly boasting that 99.98% of its sampled water meets quality standards and of a rolling investment programme to meet its regulatory obligations. And, God, has it borrowed freely! It is crippled with debt, which has jumped from £1.8bn to £8bn over the past decade under its foreign owners – first the German utility RWE and, since 2006, a group of private equity funds domiciled in Luxembourg, marshalled by the Australian bank Macquarie. Taking account of the debt means that its net worth has hardly risen at all.

Macquarie is the bank that makes Mitt Romney’s Bain Capital look saintly. Its every effort is organised to outflank regulators and tax authorities, and so make extra for itself – thus its nickname as the millionaire factory. But the game cannot start unless it owns a monopoly business, such as Thames Water, that reliably generates profits and cash. In a country such as Britain, whose politicians like to claim is “open for business” and where tough questions about corporate behaviour are rarely asked, it is an invitation to be looted, and so we have been. Responsible owners would steward their company with more care.

Thames Water has done what the regulator has asked but no more. It has not been concerned to make the water system more resilient, with, say, back-up reservoirs to guard against climate change – earlier this year, we witnessed restrictions on water use because of drought. Nor has it managed its affairs so that it has spare capacity for the unexpected or for a big project like the tideway tunnel.

Instead it is a vehicle whose over-riding priority is incredible shareholder enrichment. By maxing out on debt, all the astonishingly high interest payments can be offset against tax, so that in 2012 it paid no tax whatsoever even while paying £279.5m of dividends – subject, of course, to minimal Luxembourg taxation. T Martin Blaiklock, an infrastructure consultant whose work the Observer reports today, calculates that if Thames had made no dividend payments over the past 10 years and instead used the cash to build up reserves, it would have accumulated £4bn to build the tunnel with no extra borrowing, and thus no extra water charges. The private equity groups behind Thames, he reckons, would have merely seen their investment grow by about two-thirds since 2006 rather than enjoyed a tenfold increase – a much fairer deal all round.

As it is, the Treasury is going to endorse the way Thames has been managed by offering it the get-out-of-jail free card of an infrastructure guarantee. I favour using such guarantees to deliver infrastructure investment that would not otherwise take place, but it throws into sharp relief the co-dependence that exists between the public realm and the private sector – and one that is wholly unacknowledged either in law or culturally.

Thames Water is a utility providing 14 million Londoners with water. In law, and culturally, it is no more than a private equity plaything whose obligations to London are secondary to whatever wheeze will enrich its shareholders, who now include both Abu Dhabi’s and China’s sovereign wealth funds.

Most of England’s water companies are run the same way. As Blaiklock comments, sooner or later one of our overindebted water companies will collapse, requiring a more formal bailout than an infrastructure guarantee. (State-owned Scottish Water, by contrast, faces no such risk.) But it will have contributed precious little tax to the state that is bailing it out.

Four crucial reforms are required before the guarantee scheme is launched.

First, Ofwat, the regulator, should have much greater powers with regard to water companies’ balance sheet strategies: borrowing plans should only go forward with its prior approval and it should be able to launch periodic stress tests.

Second, as public service companies, all British water companies should pay corporation tax as a percentage of turnover, with proper deductions for investment and depreciation, but no allowances for any financial transaction with a tax haven.

Third, non-executive directors of utilities should be made legally responsible for ensuring that the utility’s first obligation is to discharge its purpose as a utility rather than to be financially engineered to induce high shareholder returns.

Fourth, the government should take a golden share in each company that accepts a guarantee.

What has happened to the English water industry over the past 20 years is as disgraceful as what happened to our banks. Britain badly needs new infrastructure investment; but it also needs a more responsible capitalism. Mr Osborne has the opportunity next month to ensure both. He cannot – and must not – offer indiscriminate guarantees for no wider economic and social return