‘The government is linking us with Maoists to discredit us’

‘The Elgar Parishad turned out to be the first rallying cry against the BJP and RSS in Maharashtra.’
‘The speakers took a vow not to vote for the BJP.’
Jyoti Punwani reports from Pune. IMAGE: Laughing at the Pune police’s accusation that the Elgar Parsihad event was financed by Maoists, Aakash Sable reveals that so hard up were the organisers for cash, they found it difficult to pay the sound system provider who threatened to switch off the mikes every hour. Photograph: Jyoti Punwani

As the government and Hindutva think-tanks such as the Vivek Vichar Manch link the Bhima-Koregaon violence to the ‘Maoist-backed’ Elgar Parishad, what do those who were closely involved in the nitty-gritty of organising the Parishad think about this allegation?

The Pune police not only gave permission for the Elgar Parishad, held on December 31, 2017, at Pune’s Shaniwar Wada, they even facilitated a meeting between the organisers and another organisation that wanted the Shanivar Wada ground the next morning, January 1, 2018.

Today, the same Pune police are attempting to link the Elgar Parishad with Maoists.

So far, they have arrested five activists and attempted to arrest five others from across the country in connection with the Bhima-Koregaon violence of January 1.

The police allege that those arrested are ‘urban Naxals’, involved in organising and helping finance the Elgar Parishad. The speeches made at the Parishad are being linked to the Bhima-Koregaon violence.

The organisers of the university’s programme feared they would not get enough time to set up the stage and mandap for its function after the Elgar Parishad wound up late on December 31.

So, the university set up everything a day earlier, and let the Elgar Parishad use it for free.

The Parishad could not have made all these arrangements on its own, adds Sable.

“We couldn’t afford it,” he says. “We had decided to put up a big banner and keep a dozen chairs for the speakers in the front, that’s all. We had also planned to sell T shirts and badges at the venue.”

Laughing at the police’s accusation that the event was financed by Maoists, Sable reveals that so hard up were they for cash, they found it difficult to pay the sound system provider who threatened to switch off the mikes every hour.

But passing the hat around “as we do at all our functions”, yielded Rs 72,000. More than enough to keep the mikes going.

Despite spreading the word about the Elgar Parishad for about three months, no one had expected the massive crowds that filled the Shaniwar Wada on December 31, says Sable. There was barely place to stand.

What drew so many to a meet conceived by two retired judges, Justice P B Samant and Justice B G Kolse Patil?

“Our preparatory meetings held to publicise the event showed people, that for the first time, the BJP government was being openly criticised for its casteist and communal policies,” says Sable. 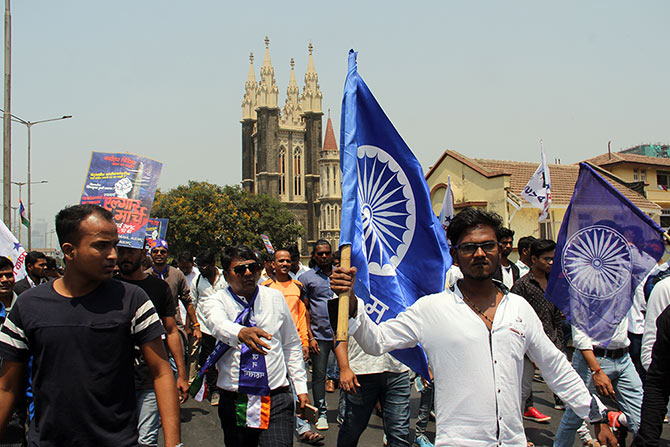 IMAGE: A protest in Mumbai on March 26, 2018 against the Bhima-Koregaon violence.

“The Elgar Parishad turned out to be the first rallying cry against the BJP and RSS in Maharashtra. The speakers took a vow not to vote for the BJP. That is also the reason the government is linking us with Maoists to discredit us,” he adds.

Sable credits the large turnout to the opposition to the Parishad from “upper caste” organisations.

The Akhil Bharatiya Brahman Mahasangh, as well as Udaysingh Peshwe, a descendant of the Peshwas, wanted the Pune police to cancel the permission it had granted the Parishad.

Former BJP corporator Milind Ekbote, head of the Samasta Hindu Aghadi, held a press conference on December 30 against the Parishad.

The police, in turn, asked the organisers to ensure that the speeches did not offend anyone’s sentiments.

Hence, the police were present right till the end.

“Had they found anything objectionable in the speeches or songs, they would have immediately filed cases against us,” says Sable.

Instead, he points out, the first complaint was filed by Tushar Damgude on January 7. 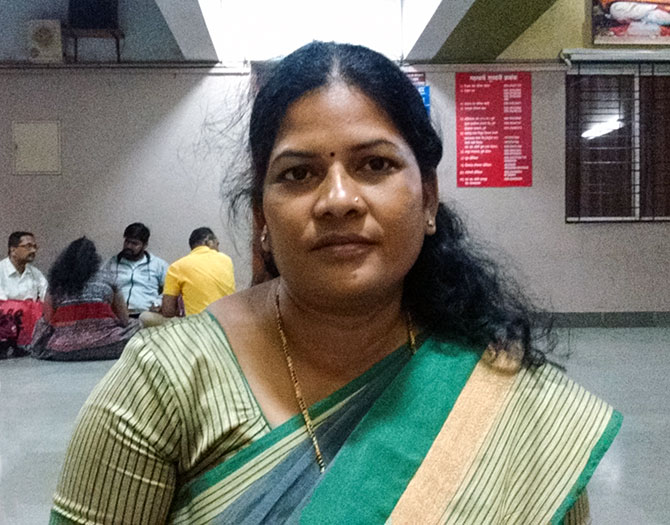 This was five days after the first FIR was filed against the January 1 violence by Dalit activist Anita Sawale. She named Milind Ekbote and Sambhaji Bhide as the men behind the violence.

Sawale says she has no intention of withdrawing her complaint despite vulgar remarks posted against her on her Facebook page.

Sawale’s accusation against Ekbote and Bhide was echoed in the report of the 10-member fact-finding committee set up by Inspector General of Police Kolhapur Vishwas Nangre-Patil soon after the Bhima-Koregaon violence and the subsequent bandh against it.

Nangre=Patil has since denied having set it the committee.

Professor M N Kamble, Pune president of the Bharipa Bahujan Mahasangh, was part of the committee, which was headed by Pune Deputy Mayor Siddarth Dhende.

Kamble tells this reporter that a delegation had gone to meet the police to protest against the combing operations in Dalit colonies that were being carried out after the Maharashtra bandh called by Prakash Ambedkar on January 2.

The outcome of that meeting was a suggestion by Nangre-Patil to set up a fact-finding committee.

The committee’s report, submitted on January 20, discovered that the immediate cause of the violence at Bhima-Koregaon were two developments in the last days of December in the village of Vadhu Budruk, four kilometres from Bhima-Koregaon. The village has Sambhaji Raje’s samadhi.

These developments resulted in pitting the ‘upper castes’ against the Dalits:

WhatsApp messages calling for the bandh show the depth of the Marathas’ anger.

Addressed to the ‘Maratha samaj’, these messages criticised the ‘false history’ displayed on the plaque at Vadhu Budruk, and the attempts to give it a ‘casteist colour’ by filing cases under the Atrocities Act against the villagers. The messages asked the Marathas to gather in lakhs to show their condemnation.

One message described January 1 as a ‘Black Day’ on which the British put an end to Shivaji Maharaj’s empire. It called for a condemnation of the ‘deshdrohis’ who helped the British.

Knowing that lakhs of Dalits were to arrive in Bhima Koregaon on the 200th anniversary of the battle, why didn’t the Pune police persuade the gram panchayats to call off the bandh?

Why did the Pune police not act against the senders of such messages? 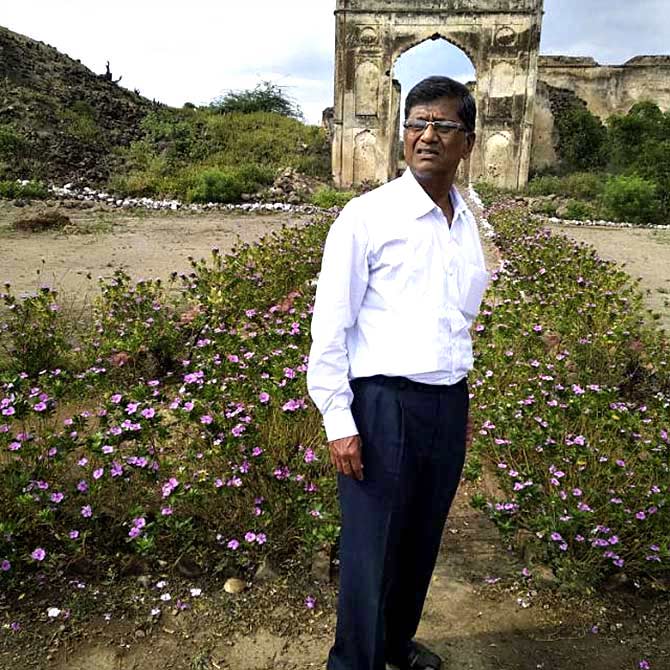 IMAGE: ‘We should have portrayed Shivaji Maharaj and Sambhaji Raje as Bahujan Yodhas (people’s heroes), which they actually were. But we didn’t bother. They were appropriated by the Hindutvawadis and portrayed as fighters for the Hindu religion,” says advocate Mohan Wadekar. Photograph: Jyoti Punwani

At the heart of the conflict, says advocate Mohan Wadekar, who was also associated with the Elgar Parishad, are the rival histories and cultural narratives of icons such as Shivaji and Sambhaji Raje.

“All of us — whether we are Communists or Socialists or Dalits — have stuck to our respective ideologues, and ignored the culture of the people. The Hindutvawadis occupied that space,” says Wadekar who heads the Bahujan Nayak Smruti Samiti (committee to commemorate Bahujan heroes), and works with Baba Adhav and the Rashtra Seva Dal.

“We should have portrayed Shivaji Maharaj and Sambhaji Raje as Bahujan Yodhas (people’s heroes), which they actually were,” he adds. “But we didn’t bother. They were appropriated by the Hindutvawadis and portrayed as fighters for the Hindu religion.”

Ekbote has been holding functions in Sambhaji Raje’s memory for many years. In his speeches, he describes Sambhaji Raje as a defender of the Hindu dharm against Aurangzeb.

The Hindutvawadis, alleges Wadekar, succeeded in sowing the seeds of cultural conflict between the scheduled castes and the rest around these narratives.

At the same time, the scheduled castes are important for the Bharatiya Janata Party unlike the Muslims. As Sable says, “The Hindutvawadis’ circle is not complete until Dalits are part of it.”

Which is why the growing association of a section of Dalits with the Leftists alarms the BJP.

“Ambedkarites were never with Hinduism,” points out Sable. “We are Buddhists. But after the BJP came to power, incidents such as Una and the killing of Dalits who marry upper castes” have been happening frequently.

“Even non-Ambedkarite Dalits are contemplating converting to Buddhism. They are realising that though they consider themselves Hindus, the BJP doesn’t treat them as equals. By branding Ambedkarites as Maoists, the BJP hopes to frighten young Dalits away from us,” he asserts.

What of the Ambedkarites? Have they been frightened by the recent arrests and the accusations of being Maoists?

Sable and his companions laugh. “We are soon going to hold another Elgar Parishad against fascism,” they says. “The latest attempt to arrest intellectuals such as Gautam NNavlakha and Sudha Bhardwaj has even brought Pune’s elite to our side.”