The New York Times Editorial That Has Upset Modi Govt 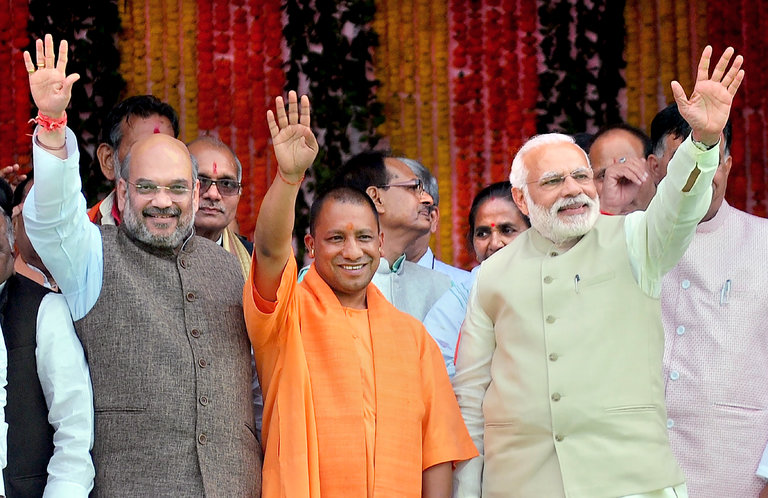 NEW DELHI: The appointment of Yogi Adityanath as Chief Minister of Uttar Pradesh was the subject of a strong, no holds barred editorial in the New York Times that saw in this a confirmation of Prime Minister’s ‘appeasement’ of the Bharatiya Janata Party’s “hard line Hindu base.” “Mr Modi revealed his hand,” concluded the NYT Editorial Board.

This clearly upset and angered the government here. So much so that the Ministry of External Affairs issued an official counter through the spokesperson questioning the ‘wisdom’ of NYT.

“All editorials or opinions are subjective. This case is particularly so and the wisdom in doubting the verdicts of genuine democratic exercises is quite questionable, both at home and abroad,” External Affairs Ministry Spokesperson Gopal Baglay said.

The NYT editorial reads as follows:

Since he was elected in 2014, Prime Minister Narendra Modi of Indiahas played a cagey game, appeasing his party’s hard-line Hindu base while promoting secular goals of development and economic growth. Despite worrying signs that he was willing to humor Hindu extremists, Mr. Modi refrained from overtly approving violence against the nation’s Muslim minority.

On Sunday, Mr. Modi revealed his hand. Emboldened by a landslide victory in recent elections in India’s largest state, Uttar Pradesh, hisparty named a firebrand Hindu cleric, Yogi Adityanath, as the state’s leader. The move is a shocking rebuke to religious minorities, and a sign that cold political calculations ahead of national elections in 2019 have led Mr. Modi’s Bharatiya Janata Party to believe that nothing stands in the way of realizing its long-held dream of transforming a secular republic into a Hindu state.

Mr. Adityanath has made a political career of demonizing Muslims, thundering against such imaginary plots as “love jihad”: the notion that Muslim men connive to water down the overwhelming Hindu majority by seducing Hindu women. He defended a Hindu mob that murdered a Muslim man in 2015 on the suspicion that his family was eating beef, and said Muslims who balked at performing a yoga salutation to the sun should “drown themselves in the sea.”

Uttar Pradesh, home to more than 200 million people, badly needs development, not ideological showmanship. The state has the highestinfant mortality rate in the country. Nearly half of its children are stunted. Educational outcomes are dismal. Youth unemployment is high.

Mr. Adityanath has sounded the right notes, saying, “My government will be for everyone, not specifically for any caste or community,” and promising to make Uttar Pradesh “the dreamland” of Mr. Modi’s development model.

But the appointment shows that Mr. Modi sees no contradiction between economic development and a muscular Hindu nationalism that feeds on stoking anti-Muslim passions. Mr. Modi’s economic policies have delivered growth, but not jobs. India needs to generate a million new jobs every month to meet employment demand. Should Mr. Adityanath fail to deliver, there is every fear that he — and Mr. Modi’s party — will resort to deadly Muslim-baiting to stay in power, turning Mr. Modi’s dreamland into a nightmare for India’s minorities, and threatening the progress that Mr. Modi has promised to all of its citizens.

(Cover Photograph: Carried by the NYT along with its editorial)

Sadhguru uses fake video from Africa to praise PM on Swacch Bharat, gets trolled
Telangana: Dalit man, who was in love with upper caste woman, killed
What Really Happened at the #Aadhaar hearing in the SC
Protest against unethical media coverage of Tehelka Case #Vaw