Urgent: Retract all notifications and orders that criminalize or use coercion and violence against the movement of migrant workers 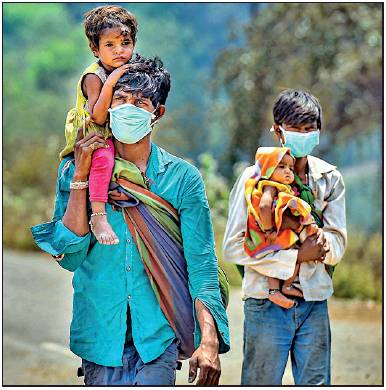 We, Jan Swasthya Abhiyan and All India People’s Science Network are extremely concerned at the way Government has announced the lockdown in an utter arbitrary, unprepared and hurried manner, which has implications for the vulnerable populations.

The lockdown has been followed by curtailment of public and other transportation. It is now evident that the lockdown was imposed without forethought and planning for the obvious accompanying arrangements for a variety of needs of the people, especially of migrant workers, daily wage earners, unorganized sector workers including the self-employed.

It is also clear that predilections of migrant workers of all categories in the lockdown-triggered context of loss of employment and incomes, loss of shelter, deprivation of food and high exposure to the Covid-19 epidemic in conditions of overcrowding and potential malnutrition, was not taken into account when announcing the lockdown.

No preparatory actions were taken either. That this led to anxiety, increasing desperation and pronounced desire to return to native villages and towns where migrant workers and their families perceive that at least basic food, shelter and social support structures would be available to them, should have been anticipated. The mass exodus of migrant workers and their families from metros and other cities back to their villages, and their resort to attempting to walk all the way, often over many hundred kilometers, in the absence of any other mode of public transportation. This has come at significant social, economic and human costs, evidence of which is fast emerging through media and civil society reports from different corners of the country.

Six days into the lockdown, tens of thousands of distressed, hungry and fatigued people, including women and children (pregnant women and infants) are waiting desperately under overcrowded conditions at various places for any available transport that would take them back to their towns and villages. Lakhs of migrant labour and their families are paying an enormous human price to undertake these journeys, traversing hundreds of kilometres on foot. Women, children and the elderly are particularly at risk.

Till date 22 deaths have been recorded of migrants, including children, on the road and the actual number of deaths may be higher. In the absence of anticipation and preparedness, there were initially different responses by State government, with some arranging for buses to take these migrants to different locations within their States or to state borders with neighbouring states.

Even in such cases, no 31/03/20 arrangements were made for safe transport maintaining physical distance, or preparedness for quarantine or other precautions even at district level in the different destinations. Violence by police and authorities to impose the lockdown in the context of such “distress reverse migration” at an unprecedented scale is being widely reported. Media has reported the spraying of returning migrant workers in Bareilly, Uttar Pradesh with disinfectant which is unacceptable and abhorrent behaviour on part of the administration. The Chief Minister of Telengana is reported as saying that he may have to pass shoot-at-sight orders for anyone violating the lockdown.

The notification by Ministry of Home Affairs (MHA), No. 40-3/2020-DM-I (A) of 29th March 2020 reiterates that ‘movement of migrants is violation of the lock-down’ and urges state action, including police action. While the MHA notification does detail some of the ways in which rights of these migrants must be protected by their employers and landlords, and directs States to provide them food and shelter, no uniform guidelines or support has been given.

However, the MHA notification’s assertion that this is a violation of lockdown measures has prompted states like Haryana to impose penal orders and criminalise the migrants. F

ollowing up on the MHA’s orders, the Government of Haryana has notified that no arrangement of transport will be made for people to go back to their native homes. The letter further notes that all people on the road will be sent back to where they were working and in case they resist, then they will be booked for ‘jaywalking’ and incarcerated in stadiums that are to be turned into ‘temporary jails’.

We are dismayed at the use of the word “jay walking” as it reflects a bias against the struggles of the poor migrant workers and blind-sides the enormous humanitarian crisis. In the unfolding scenario, we are outraged at the response of some states, reinforcing that the mass movement of migrants arising out of sheer desperation constitutes a violation of the lockdown, and imposing penal orders to criminalise the migrants.

Further, the mass spraying of disinfectant on migrants returning home is not only a cruel act of violation of their dignity, it can have serious repercussions for their health. These actions and notifications are an absolute travesty of justice and violation of human rights of some of the poorest and most vulnerable people of this country on an unprecedented scale.

The situation that the migrants are in today is a reflection of continued and long-term State apathy and failure of the State in anticipating the problems likely to confront migrant workers and other vulnerable unorganized sector workers, which many experts and civil society organizations had cautioned about even at the outset. Penalising them for undertaking these 31/03/20 perilous journeys that have been necessitated by total absence of preparedness, and negligence is an extreme form of violation of basic human rights.

JSA and AIPSN urge the central and state governments to immediately review the lockdown imposed across the country, retract the orders that criminalise and penalise the forced movement of migrant and take measures to alleviate problems faced by migrants.

The Central and State governments must take the following action:

• Retract immediately any notifications, orders that criminalise, use coercion and violence to prevent the enforced movement of migrant workers. No coercion should be permitted either through government directive or through administrative decisions. The State instead needs to uphold the human rights of people, and address this health and human crisis with compassion and care.

• Stop penalizing migrant workers and revoke notifications / orders on conversion of stadiums or other spaces into jails; instead, use such spaces for shelter and put in place measures for provision of food and health care.

• Stop police brutality on the migrants and take action against the officers of the police force and administration who have inflicted violence.

• Stop spraying chemicals/chlorine on migrants returning at the borders in the name of ‘disinfecting’. WHO Myth Busters notes “spraying alcohol or chlorine all over your body will not kill viruses….infact it is harmful”. This kind of action is not acceptable.

• Allow migrant workers and their families to make an informed decision about remaining where they are or going to their villages.

• Facilitate free transportation of those who are stranded in various places to take them to their respective villages, towns, cities; the state must undertake all necessary measures to ensure utmost protection in the course of the journey as well at the destination to prevent COVID-19 infection. The central government may issue guidelines to the states to screen such workers and start transportation through road or railways. This transport should be completely free, without any conditionality of possession of Aadhaar or any other ID card.

• Urgently ensure provisioning of all necessary services (food, shelter, water, healthcare, information) for those who are still living at their place of work, so that they are not forced to leave. State’s support should be given even in the absence of bank account or Aadhar card. 31/03/20