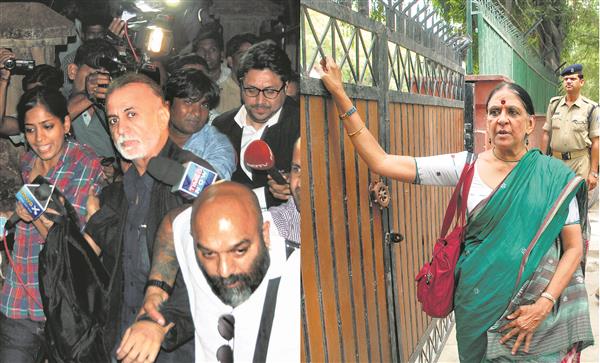 The sting operation revealed how senior members of armed forces, politicians and officials in the Ministry of Defence were only too willing to be bribed

Tarun Tejpal (L) and Jaya Jaitly. It is a huge irony that these two antagonists are where they are now.

The Tehelka case has come to a conclusion of sorts, after two decades, with the conviction of one of the main accused, Jaya Jaitly. She has been found guilty of “criminal conspiracy” under the provisions of the Prevention of Corruption Act by a special CBI court, and subsequently sentenced to four years in prison. Maj Gen SP Murgai (retd) and Gopal Pacherwal, a political colleague of Jaitly, were also found guilty, while a fourth accused, a businessman, Surendra Surekha, turned approver. The monetary kickbacks were allegedly handed over to them at the residence of the Defence Minister, George Fernandes, who was later compelled to resign. The Vajpayee government came perilously close to falling.

Earlier, a string of high-ranking military officers and officials of the Ministry of Defence were, likewise, found guilty in the same case. But the biggest casualty of the sting operation was the late Bangaru Laxman, the then president of the Bharatiya Janata Party, who, too, was sentenced to four years in prison. The secret footage of him shovelling a mass of currency notes into the drawer of his desk remains indelibly etched in memory.

Tehelka (meaning “commotion”) was set up in 2000 and was India’s first journalistic website. It was conceived by Tarun Tejpal, though the sting operations using secret cameras, a novelty then, were the brainchild of Aniruddha Bahal and Mathew Samuel. Tehelka first uncovered a cricket match-fixing scandal in an India versus South Africa Test. But what caught the public imagination was its ‘Operation West End’. Samuel pretended to be the representative of a fictitious London-based company manufacturing “hand-held thermal cameras” that were needed by the Indian Army. The sting operation revealed that senior members of the armed forces, politicians and officials in the MoD were only too willing to be bribed. And the bribes went right up to the top. As was said at the time, it was all about ‘money, booze and sex’. One senior Army officer even specified what brand of Johnnie Walker Scotch whisky was to be delivered to him! The bribe-takers wanted women — and got them. ‘West End’ showed up the ministry in a murky, shameful light.

Let me turn to Jaya Jaitly and Tarun Tejpal, since I have known both of them for many years.

Jaya was always called June by her friends, and her maiden surname was Chettur. Her father, a career diplomat, died in service, relatively young. I got to know her when we were both still in school. A dusky, striking, smart lady, she turned men’s heads. She was chosen as ‘Miss Miranda’ when she joined Miranda House, the most elite women’s college in Delhi University. In those days, they used to have an informal beauty contest — later discontinued by feminists — among the freshers (Brinda Karat, the prominent Communist Party leader, known as Binnie Das before her marriage, was another ‘Miss Miranda’). June later married Ashok (‘Tony’) Jaitly, who joined the Indian Administrative Service. Their daughter married Test cricketer Ajay Jadeja, who faced charges of match-fixing.

In 1977, the notorious Emergency ended, the Congress lost the General Election and the Janata Party came to power. George Fernandes was made the Industries Minister, a disastrous choice, as foreign investment into the country froze, with the expulsion of corporate giants IBM and Coca-Cola (they were required to become majority Indian shareholding, which they refused). India’s development suffered. But Fernandes had acquired mythic proportions, along with the romantic image of a simple-living idealist fighting for the common man and for justice. It was a totally fake façade, needless to say, as he became adept at switching parties and loyalties. From being an ardent socialist and secularist, he turned into an equally ardent ally of the BJP, and was appointed Defence Minister in the Vajpayee government (as disastrous an appointment, as Tehelka’s sting clearly revealed). But his dashing image attracted women. Jaya Jaitly was one of them, facilitated by the fact that her husband was appointed special assistant to Fernandes when he was the Industries Minister. Meanwhile, his marriage to Leila (daughter of Humayun Kabir, a former minister) was unravelling. Later, the Jaitlys also split and Jaya became a constant “companion” of Fernandes.

I got to know Tarun Tejpal in 1985, when I was the Resident Editor in Chandigarh of a national daily. He and his girlfriend, Geetan (later his wife), had just graduated from Panjab University and applied for jobs as sub-editors. They both scored high in the written test. At the interview, I detected a touch of arrogance that would later become so prominent in his subsequent career. Nevertheless, he got the job, though I knew he would not stay long. Chandigarh was too small an arena for his soaring ambition. Sure enough, he moved to Delhi and then swiftly upwards in his career, until he decided to be his own man and set up the Tehelka website. But after the ‘Operation West End’ sting, the knives of the hugely embarrassed BJP were out for him. Much later, allegations of rape were levelled against him by a junior colleague in Goa. Since then, he has been arrested, released on bail by the Supreme Court, and is presently facing trial.

Tejpal was the first person to publish Arundhati Roy’s The God of Small Things, which went on win the prestigious Booker Prize, and he has himself written two critically acclaimed novels, The Alchemy of Desire and The Story of My Assassins (on which the current, popular Paatal Lok web-series is based).

It is an entirely different and sad story for the equally talented Jaya Jaitly. It is a huge irony that these two antagonists are where they are now.

— The writer is a veteran journalist

What Modi has to say about the Dalits #NaMo
Pregnant Newscaster Shares Hate Mail About Her On-Air Outfits
Sedition Case: Ex-Delhi University Lecturer SAR Geelani Gets Release Order
Kasab, Bajrangi and the case against the #deathpenalty