Why handling of BHU violence is evocative of Nazi Germany

Sophie Scholl, her brother, Hans, and another close friend of theirs from Munich university were executed for resisting the atrocities

On February 22, 1943, a young petite girl, found her neck on the guillotine in Nazi Germany. All of 21 years of age, Sophie Scholl, her brother, Hans Scholl, and another close friend of theirs from Munich university were executed for resisting the atrocities of the Nazi regime.

They were a part of the non violent and secret White Rose movement that endeavoured to embolden citizens and encourage them to find their voice to overcome fascist forces. They could kill the youngsters but they could not silence their voices that demanded freedom, liberty and peace.

All that the members of the White Rose movement did was print and distribute leaflets imploring the German youth to resist the Nazi government. They appealed to the conscience of the average citizen. The pamphlets didn’t call for citizens to take up arms against the regime and only vaguely asked the youth to stand-up to the government, without planning any concrete conspiracies to oust the Nazi government. It was largely a tiny underground movement led by a small group of idealistic youngsters. In fact, Sophie Scholl, a deeply religious girl, had previously taken part in the League of German Girls, a pseudo-Nazi organization.

And yet, the mighty Nazi government was in jitters. It concluded the trial in four days – they were caught distributing leaflets on February 18, 1943 – and sentenced them to death. The capital punishment was carried out on the same day. It is a trait of authoritarian regimes of any degree that they lack courage and are deeply insecure. It is perhaps to mask their incompetence that they resort to brutally stubbing out any dissenting voices and create a smokescreen by raking up nationalism. Any dissent is not tolerated and immediately dubbed anti-national.

While the situation in India today is nowhere near what it was in Germany, the authoritarian streak of this government cannot be missed. There have been numerous instances where it has acted without compassion. The latest case being its handling of the protests in Banaras Hindu University. 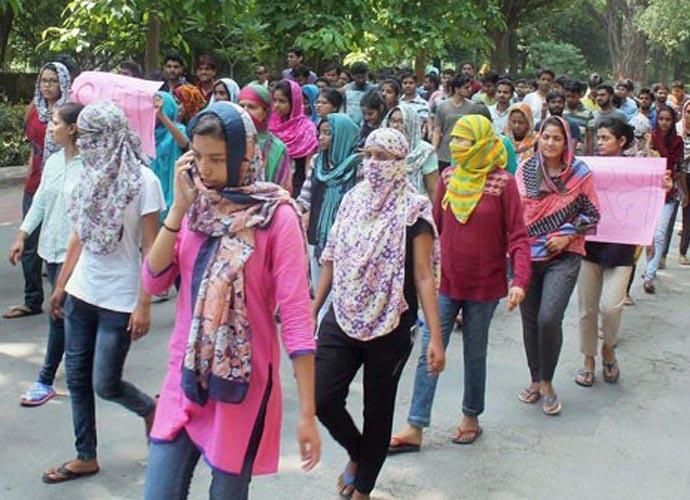 Girls beaten up in Prime Minister’s constituency may appear feeble, but are the embodiment of Nari Shakti.

Girls, mostly the age of Sophie Scholl, only sought justice from the university authorities which they were denied. Ideally, the university should have taken cognisance of the students’ complaint, investigated the alleged case of harassment and allowed the law to take its own course. However, the authorities shockingly indulged in victim shaming. When the protests escalated, the students, mostly girls were brutally beaten by the police late in the night. Vice-chancellor GC Tripathi brazened out the flak he drew for mishandling the case and even implied that it is a conspiracy by “anti-social” elements to defame the university.

The Prime Minister, who normally is quick to tweet on tragedies across the world, and even wish global leaders when it’s not their birthday, (as Afghan President Ashraf Ghani found out in February 2016), kept mum on the issue, which has become his wont. The chief minister of the state is known to make misogynistic remarks at regular intervals. He not only opposed the women’s reservation bill earlier but also called the discussion on it a waste of time.

The irony is that all this happened during the Navaratri days, when most rightist leaders gave speeches about Nari Shakti, ad nauseam. People questioning the government over the matter were harassed on the social media with the trite allegations of being anti nationals, traitors, anti-Hindu etc. Such insensitivity and insecurity of the ruling government doesn’t augur well for our society.

It displays many traits of an authoritarian regime, where dissent is not tolerated and silenced. There is rampant sexism and a misplaced sense of nationalism. If we keep quiet for too long, the malaise will get deeper and severely cripple our progress as a society. The girls may be young and petite. But they are by no means fickle or feeble. They are the embodiment of Nari Shakti and the government will do well to address their concerns and deliver justice. If the government continues to live in denial, the simmering anger in the youth might become a cause for worry, given that the economy is in shambles due to the myopic policies of the government.

No authoritarian government has ever withstood the test of time. Somewhere in India too, there will rise a Sophie Scholl and a Hans Scholl. The words of the White Rose movement’s first leaflet are worth recalling as they hold true for today’s India too:

Nothing is so unworthy of a civilised nation as allowing itself to be governed without opposition by an irresponsible clique that has yielded to base instinct. It is certain that today every honest German is ashamed of his government. Who among us has any conception of the dimensions of shame that will befall us and our children when one day the veil has fallen from our eyes and the most horrible of crimes – crimes that infinitely outdistance every human measure – reach the light of day?

The Indian citizenry, especially the youth will do well to remember.

With over 30 million households yet to be electrified, Saubhagya Yojna way behind the target
Look Around, Workers World over Are Pissed #mustread
Press Release - Rally Against Anti-Worker Labour Law Reforms in Gurgaon
#Goodnews- NGT orders complete ban on mining in Rajasthan's Alwar